I had a HAPPENING last week Thursday night at about 8 pm as I was trying to send an e-mail with an evaluation I had finished writing attached.  I was in denial that this event was imminent for about 4 days prior to it actually occurring.  The power of denial is truly very very large.  My hard drive crashed.  I have used my little Mac Powerbook G4 with the sexy titanium case for 4 years... and it was a powerhouse.  It never failed me (except when the disk drive stopped working, but I forgave it and bought an external drive) until Thursday when at 8:23 pm the hard drive crashed.  I said a few hail marys (and I'm not Catholic), turned the power off, let it "rest" for an hour or so while I had a glass of wine, and then turned it back on.  I got the spinning blue wheel of death.  I was later told by the computer technician that that means it doesn't recognize the hard drive.  But I was hoping it was just temporary insanity and I turned her off again and let her "rest" until the morning.
Well, the spinning wheel of death was there again, so I carted her off to the computer doctor (really, their business is called computer medics--unfortunately all I came home with today was a body they drug up from the morgue).  I was gently and soundly reprimanded for not having my stuff backed up (she hadn't failed me before!  Why should I take time to back stuff up?) and told that the files were irretrievable and that I should start shopping for a new Macintosh.  This seemed a little harsh, but as today is Wednesday and I had people breathing down my neck asking for those lost evaluations (which I shall have to rewrite as soon as I finish the current glass of wine), I had to find myself a new computer.
And about the power of denial?  The computer had been slowing down exponentially for about 3 days and was starting to make ominous whirring sounds.  I did get a little alarmed at about 8:21 pm on that fateful Thursday and started thinking about backing up things... and then 8:23 came around and the chance was lost.
A few seconds of silence please for the dearly departed...  I really did love this computer.  I didn't have a cross, so I used three little goddesses.  I'm sure it is all the same to the computer. 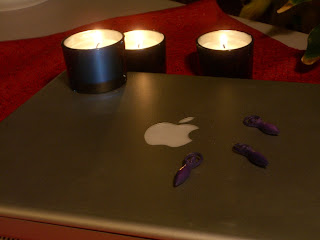 And perhaps that will help me find the genius who is going to recover my data, eh?
The new MacBook that I bought today is still sexy and oh-so-Mac.  I love the Mac--the little icons that jump and look like they're three dimensional, the programs which are intuitive and don't require me to remember where things actually are, the plug-n-play aspect which doesn't require me to read instruction manuals... you can't beat a Mac.  This new Mac has something called a Time Machine which I really hope might help me correct some errors I made in the last 36 years.
But being without a computer for 6 days opened my eyes to just how much time I spend on the thing.  Life would be simpler without this technology and we would have more time for watching the clouds.  Honestly, the first thing I thought when it died was, "thank god I don't have to work any more tonight."
All I have to say in the final analysis is, if you don't have a backup for your computer, DO IT NOW!  I will be purchasing an external hard drive onto which I will place all the junk I want to sort through until technology changes so much I can't access it anymore... just in case this new machine decides to let me down one day.
Posted by Rebecca Mezoff