Several years ago I completed a couple tapestries as pulpit hangings for a Presbyterian church in Gallup, NM.  There are four liturgical colors in this tradition: purple, green, white, and red.  This piece was for the purple periods (around Christmas and Easter).
I also wove a piece called Common Time for the green seasons.  I had planned on weaving a white overlay for this purple tapestry to be used during the white season starting at Christmas, but have not gotten to it for several years.  Last week I finished a tapestry and thought, what with Christmas right around the corner, it might be a good idea to finish that commission in time for Christmas.  I had previously planned a transparent loom-controlled weaving inspired by Doramay Keasby's book, Sheer Delight--Handwoven Transparencies.  I had the linen and silk and even had the design, I only had to weave it.  So with Doramay to guide me, I gave it a whirl fully expecting it to take the several days I had at my disposal. 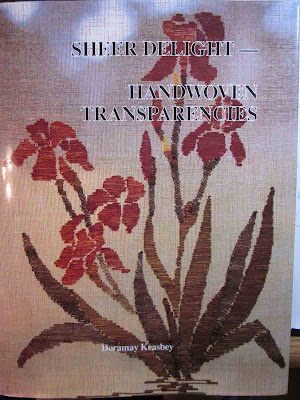 It has been 6 years since I wove anything loom-controlled.  I had completely forgotten how fast it can go once you get that warp on the loom.  I had to use my little Macomber as the big one has been relegated to the shed for now and the Harrisville has a tapestry warp on it.  I wove the whole thing off in a matter of hours including experimenting with the rosepath and how much silk to use (the yellow inlay is silk). 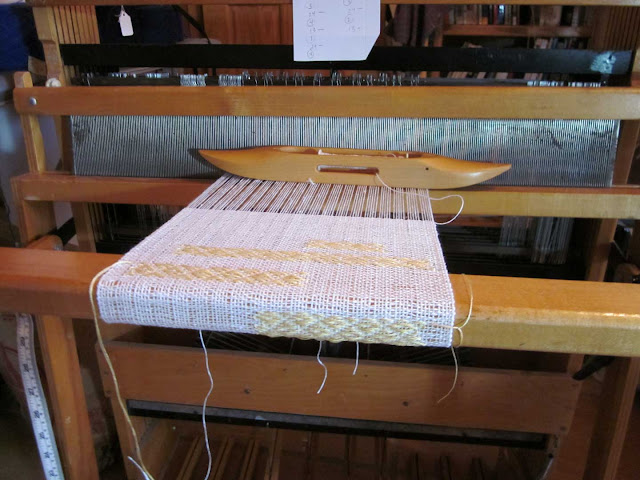 I warped it for rosepath and used a tabby ground in linen with a rosepath design in silk.  I had to write the treadling on a scrap of paper and tape it to the loom--it has been a really long time since I wove something that wasn't just plain weave treadling.  I think the project might even work out... though of course the tapestry is in Gallup and I will have to take it there for a final fitting.  I did a twisted fringe at the end.  The linen seemed to twist well. 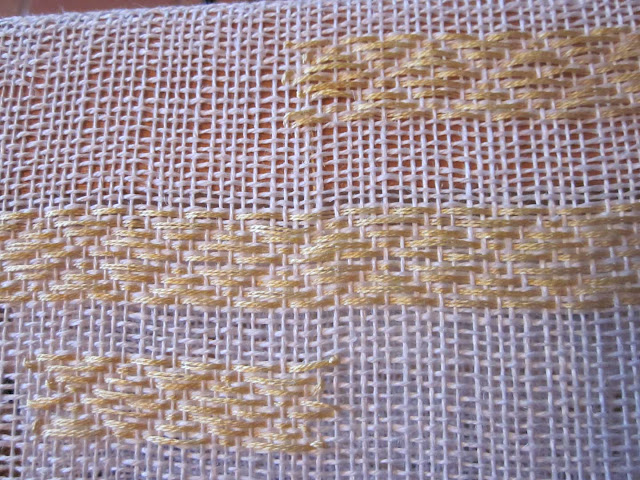 Off the loom and pressed, it looks kind of like this. 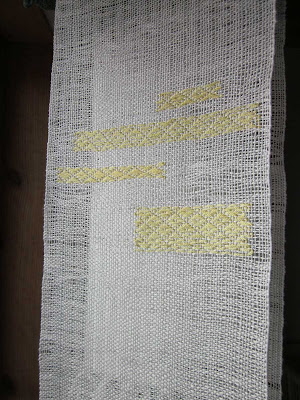 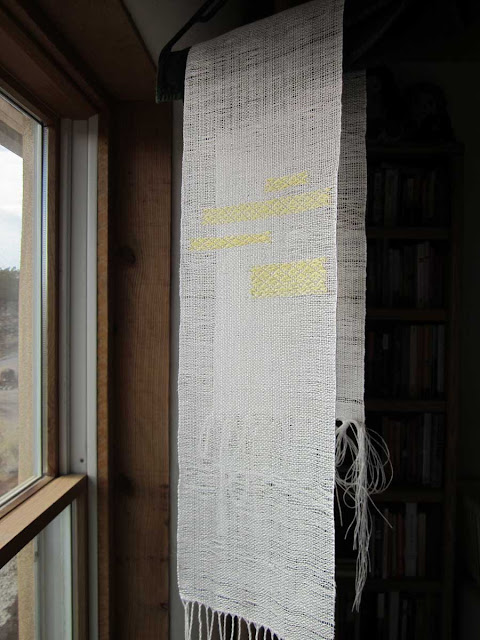 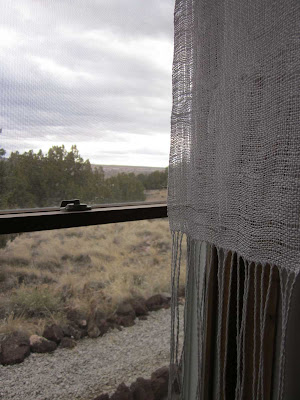 I want to shape the fringe at the bottom into a point, but need the original tapestry to judge it by.  The top will have to be finished so that it can attach to the pulpit and hang over the Anthem tapestry.  I'm entirely unsure whether or not this experiment will work out.  But if it doesn't, I learned something anyway!  I did like working with the linen (Newport linen 16/2 from Halcyon) and will probably try something like this again.  In the meantime, the Macomber is going back into storage and I'm off to warp my Mirrix for a little holiday tapestry work at my parents house.
Happy Holidays!
Rebecca