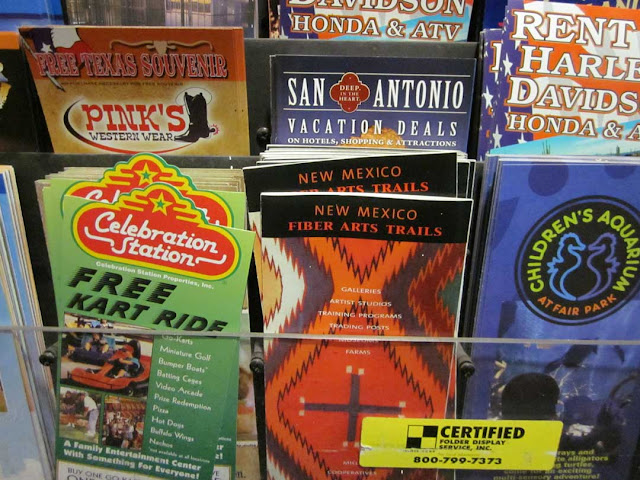 This is what I saw in a rack card display at a Ramada Inn in Dallas, Texas last weekend.  I wasn't supposed to be in a Ramada Inn in Texas, but I was interested to see how far afield the NM Fiber Arts Trails brochures had made it.  Unfortunately it was 5am on the day I was already supposed to be in Gulfport, MS for a wedding.  Through a series of travel mishaps involving thunderstorms and perhaps bad luck, I got to spend a night in Dallas (and fortunately not on one of those piles of cots I saw in the airport the next morning!).  Could be worse I suppose--I did make it to the wedding in time.

I was a little afraid that my pilot would be raptured while we were in the air, but apparently he was enough of a sinner that he was able to land the plane safely. 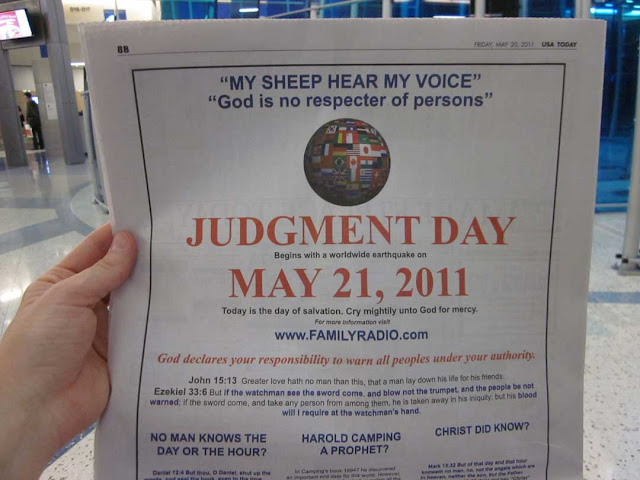 After my 5:30am arrival at the airport for a 9am flight (I was hoping to get an earlier flight or perhaps just hedging against more bad luck as most people hadn't been lucky enough to get a confirmed seat on a flight to the coast) I decided to check out the art in terminal D.  There was a descriptive brochure to show me around...  This thing made music when you walked through it. 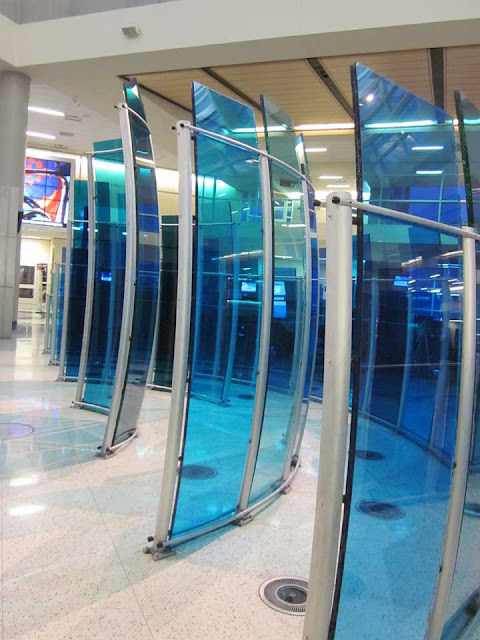 But mostly I just knitted.  This photo reminds me of the last time I flew--a similar photo in the Frankfurt airport sometime in the middle of the night...
Eventually after reading a National Geographic article on climbing in Yosemite I moved on to the People magazine's issue about the Royal Wedding... at this point I felt my intelligence leaking into the sticky vinyl seats and had to talk sternly to myself to keep from moving on to the Enquirer.  I was afraid if I sunk that far the white-coated people would find me under the yogurt cart rocking and mumbling.

I wondered many times what the point of all that self-imposed torture was, but of course we want to get places quickly these days and can't stand it when we are delayed by hours or days.  Perhaps a little Buddhist perspective might get me through the next one... increase compassion, try to talk to fellow travelers (if absolutely necessary), and let the little wheelchair ladies go in front of you in line.  Who knows, maybe I'll get lucky and get to sit by a guide dog.

I am looking down the mouth of another airplane trip (I'll be carbon off-setting these flights forever) and I really hope the next blog post doesn't include a photo with knitting and a sleeping guy in the Detroit or Chicago airports.

Guess what-- coming home I couldn't get out of Gulfport and finally got a flight from Memphis to ABQ (a day and 8 hours of driving later) which stopped in, you guessed it, Dallas. Joining the throngs of cranky air travel people in Dallas for another terminal tour and then I finally made it home.

But, despite the flying difficulties, I had a fantastic weekend... here are some highlights. 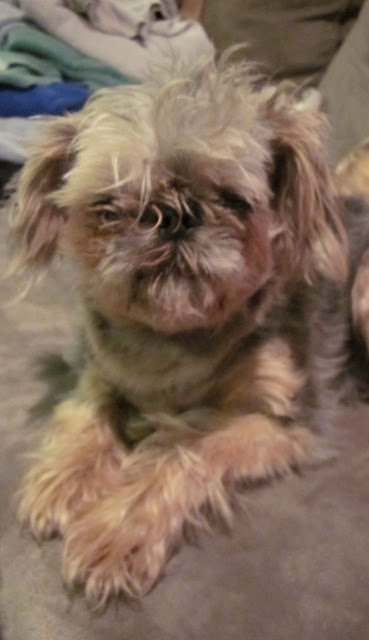 And this is Jiggy.  He should be my mascot.  He was chewed up by a Rottweiler and put together by Emily's brother-in-law (who is actually a veterinarian fortunately).  He is one tough little dude.  Sometimes his eyeballs still pop out, but Dr. J just pops them back in.  Sometimes you've gotta be tough.
Posted by Rebecca Mezoff