Light from the forest fire...

I live on a south-east facing flank of a mesa north of Espanola, NM.  This mesa blocks my view of the Jemez mountains almost completely.  Thursday, Jun 30th at about 10 pm I drove to the top of the mesa and was shocked to see the entire top of the Jemez glowing or with active fires (Las Conchas fire).  The bright red-orange flames about 20 miles away in the dark night stopped me cold.  Fire is an immensely powerful force.
The play of light with the smoke swirling around my home is dramatic and mesmerizing.  I have learned that if I glance up from the loom and see that the sunlight on the ground is reddish I need to check for smoke (and open windows)... but also to go out and look up at the color of the sky. 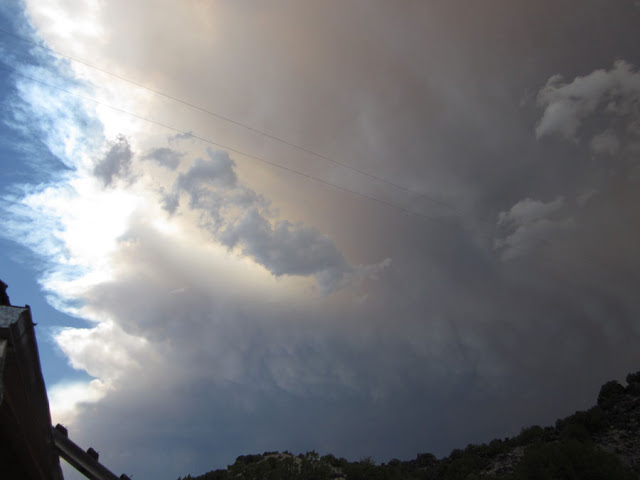 The smoke makes for exceptionally dramatic sunsets.  I did a piece a few years ago in a gradation of these exact colors.

I was grateful that I could escape the smoke and heat for a few days this weekend to head to Colorado to spend some time with my family.  As of Thursday June 30th, most of New Mexico was under stage III fire restrictions which indicates a complete closing of the forests (and a hopefully temporary end to my NM hiking escapades).  As I drove north along Hwy 285 I noticed that every forest service road was gated and signed as closed.  Some roads that didn't have gates had newly hung barbed wire across the cattle guards.  I pulled over at San Antonio mountain on a road I hoped to go down later this summer for some hiking in the Cruces Basin Wilderness...
As I was driving home today after enjoying 4 days of relatively smoke-free breathing in the San Luis Valley of southern Colorado (which did have visible smoke, but I couldn't smell it), I was shocked to see the Jemez.  The fire has wrapped around the north side of the Polvadera and I fear that the entire Jemez Mtn complex is in danger at this point (that is just my supposition)... on the google earth maps it looks like about a third of it has burned already.  I just couldn't believe that the fire was so close to Espanola.  (We are not in danger from this fire, but many people live in the area where this fire seems to be moving.) 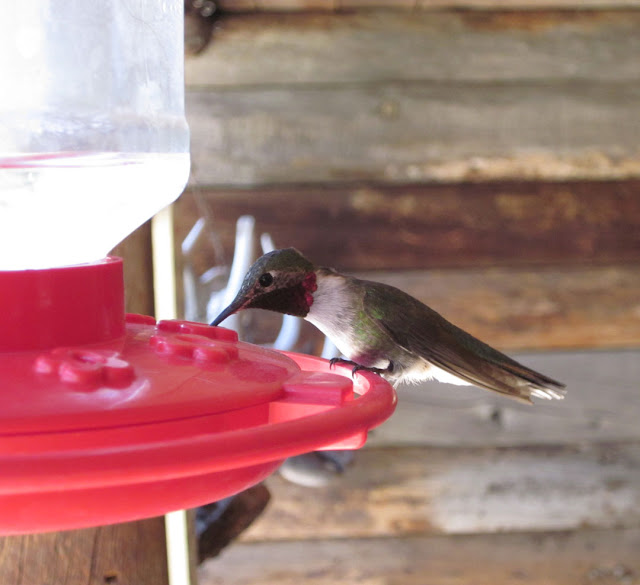 I enjoyed a wonderful weekend of hiking, family, and hummingbird watching.  Tomorrow it is back to the loom and hopefully little smoke.
Posted by Rebecca Mezoff