Skunks have been a constant in my life the last three months. I want to say right up front that NO skunks were harmed in the making of this debacle. There were no babies or adults or corpses under the house when I finally crawled under there with my respirator on. None at all.

The story continued with another horrific spraying and a landlord who, after three months, finally showed up with a little guy named Buddy. I think Buddy is his real name. The landlord needed the littlest guy because the hole under the house was (before recent enlargement) only about 20 inches wide, recessed in a flower bed, and 18 inches high. The space under the house which I can personally attest is filled with black widow spiders and other crawling critters, is not much larger. Buddy was drafted to crawl under the house and look for skunks.  He saw none. He even stated, "it smells worse in the house than it does under here!" After crawling under there myself, I have to argue with that one, but Buddy has spent his formative years working as a painter, and the toxic fumes may well have addled his smeller. And likely also his brain as he and the landlord decided that dumping multiple boxes of naphthalene mothballs under the house was a good idea. After calling poison control, I had to convince him that they weren't a good idea and Buddy had to crawl back under the house to retrieve them.

The smell continued and I started looking for a new rental. Then my sister and brother-in-law had series of brilliant ideas.  Call the skunk expert. Vent the underside of the house. We bought a fan and the skunk expert (there is a guy who has trapped over 800 skunks and continues to play with the little stripey kitties--god bless him in every way) concurred that this was the best way to rid the house of smell.  I had the landlord cancel the also-toxic ozone treatment he was planning and last evening my most excellent brother-in-law installed this fan in the previously ugly hole at the side of the house. 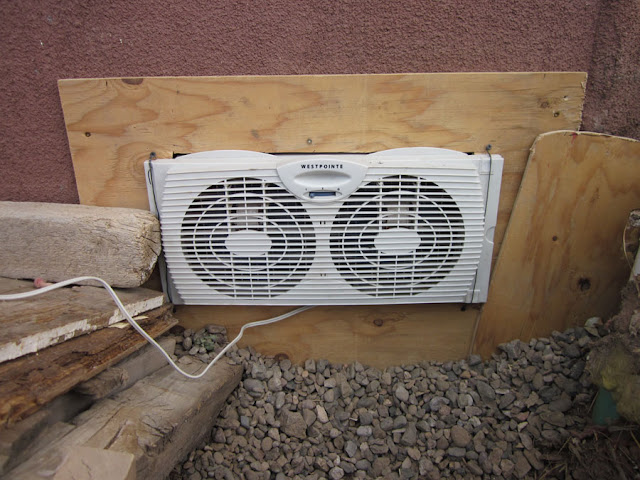 Prior skunk stories can be read HERE (The Cask of Amontillado) and HERE (Why Skunks are not smarter than I am).
Posted by Rebecca Mezoff