I recently joined twitter. I have always thought anything where you did something called "tweeting" frequently had to be a complete waste of time (which might still be true), but it seems that some people actually follow it and I thought it couldn't hurt to put some love out there in a short, quick format. So I took the plunge... and quite frankly don't really understand how it works yet.

But this post tweet by the Whitney Museum caught my eye. I definitely did want to ask the curator a question. I had a sneaking suspicion I wouldn't like the response, and I was right. 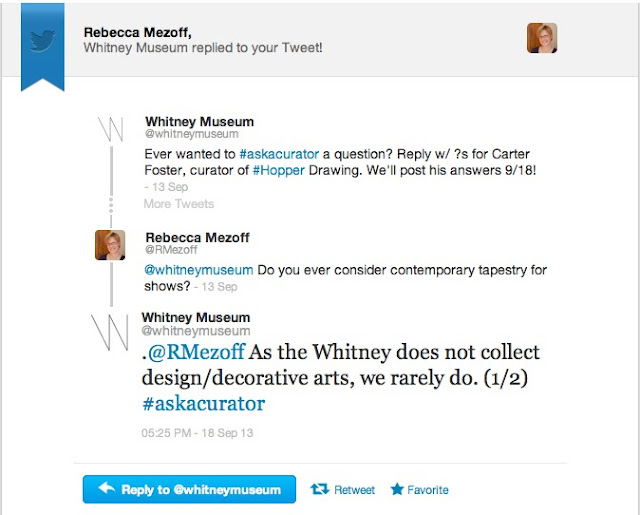 To be fair, there was a follow-up tweet with this response, so perhaps all is not lost... or is it? 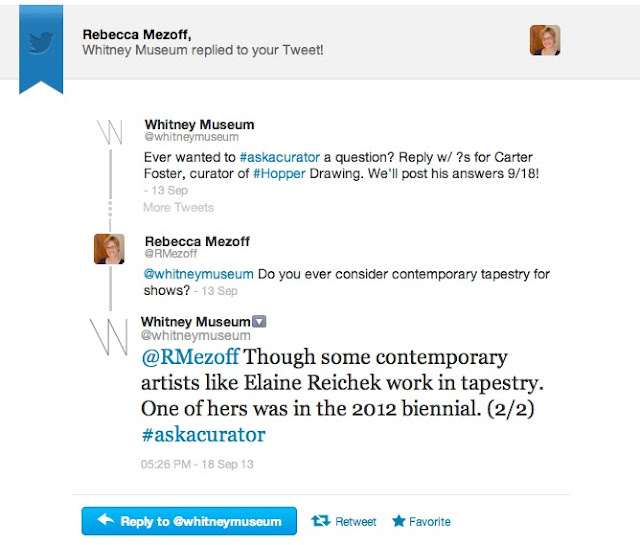 I did some quick research and the "tapestry" from the 2012 Whitney Biennial by Elaine Reichek was"woven on a computerized loom, to the artist's specifications, in a commercial mill" (From Whitney Museum of Art's website HERE). That, folks, says jacquard to me. (And no, I don't want to have the jacquard "tapestry" debate today. It is a different art form. It is fine, it just isn't the same thing as what I do and I'd really rather it wasn't called tapestry.) And if you're curious, there is a photo of the tapestry HERE on the artist's website.

I'm afraid decorative arts is not what I am going for. Add your thoughts in the comments!

P.S. If you are on twitter, my handle is @RMezoff. And if you know what those little hashtag things are all about, can you let me in on the secret? It seems so cool to talk in hashtags, but quite frankly all I really know is that it is a bunch of words squished together with a number sign at the beginning.
Posted by Rebecca Mezoff