Maggie was right... knitting with handspun

I have been spinning for about a year. Maggie Casey is my teacher.

If you know her, you won't be surprised to hear me say that Maggie was right. She told us from day one that we had to actually use our handspun, but I have been blithely ignoring her for about a year now. I have used some of it in tapestry, but when you pack the yarn into a weaving, the exact character of the yarn might not be quite as important as when you're knitting a garment.

I had some balls of handspun piling up, so I have had to institute a personal policy of no yarn store stops. A visit to one of the great yarn stores in Fort Collins is something that I am always tempted by if I'm having a rough day. But, the balls of handspun...

So I started my first project with a Malbrigo braid I spun during Spinzilla last October. That braid was hard to spin. But I didn't know it then because I was such a new spinner. I thought the drafting was supposed to be that difficult. So the yarn is dense. It is heavy. This hat is going to weigh quite a lot.
The pattern is Wurm. It is a hat with a lot of yarn in it.
Heavy it will be.
I have 8 ounces of it... what to do with the rest? 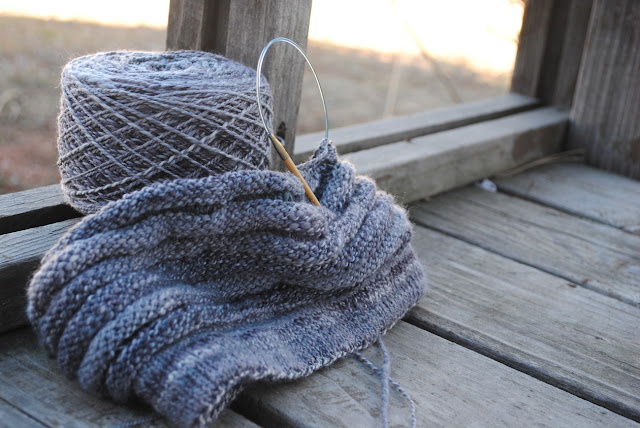 I'll let you know how it comes out.

So Maggie was right. I didn't realize how dense this yarn was until I started knitting it. I think it will make a fine hat for the mostly moderate weather in this part of Colorado. But if I wanted a very warm hat with perhaps fewer hair-crushing properties, I would definitely work on a long draw or more woolen spun preparation. This yarn ended up dense because the braid was so difficult to draft. Had I knit this up before spinning ANOTHER 8 ounces of the same fiber (in red!), I would have known that.

From now on I will try to listen to Maggie sooner.
Posted by Rebecca Mezoff