The mice that visit in the winter and other tales of woe...

**Disclaimer, warning, and general statement of non-culpability: This post contains a photo of dead, pickled rodents... almost as gross as Fluffy the cat (there is apparently a family compulsion to post photos of dead mammals on blogs). Read no further if you can't handle this stuff as I will take no responsibility for any squeamishness brought on by this post. There is a nice shot of some mountains and a weaving in progress if that helps though.***
I sat down to fortify my resolve to weave by writing about weaving (instead of actually weaving--some would call this resistance at work)...

...turn back as you can't get there from here...
(Incidently, this post seems to have little to nothing to do with weaving. Sigh.)
The last month has been full of frozen pipes, snow, cancelled school (YES!), and a little weaving. 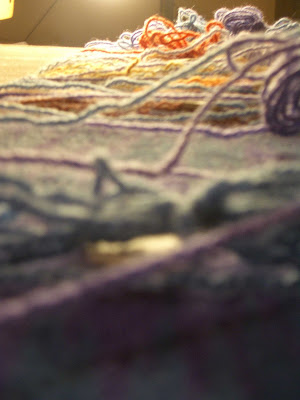 Here is the photo of the weaving in progress. Actually most of this has been done in the last week, so I guess I am finding time to get some work done. (Photo deliberately obscure as I'm not sure my feelings about this piece and I don't want to commit via blog before I have to.)
Right, so the story actually has to do with frozen pipes, mice, water softeners, and wells. I have an accessory dwelling in a little town in Northern NM where I work in a rural school district. This dwelling is a single-wide trailer and I am continuously amazed at how inefficient a means of housing this tin shack actually is. The pipes froze in December (thawed out by the trusty school maintenance team) and then when I got back from a lovely vacation in January, found they had "frozen" again... the pipes in the trailer AND the pipes in my beautiful straw bale rental house in Velarde.
Unfortunately the pipes in straw bale house go through an outbuilding where the pressure tank and water softener are housed. This building, regrettably, is not made of straw bales and thus, when the temperature dipped to "it-feels-like-the-San-Luis-Valley" lows, the pipes froze. Fortunately for me, my neighbor noticed the problem when she tried to water my plants and alerted my most-excellent landlady who thawed out the pipes. All this activity along with subsequent problems with the well, the pressure tank, and some gunk in the water filter that looks like tar got me more involved with my water system than I ever wanted to be. This, at some point, led me to look inside the water softener. This may have been a mistake. I was only trying to see if it needed more salt. What I found, besides the fact that it did need more salt, was two dead mice. I felt the bile rising in my throat when I saw those little pickled bodies floating in my water supply. I'm not entirely sure how a water softener works, but in that moment I was pretty sure I had been drinking dead mouse parts for possibly quite some time. 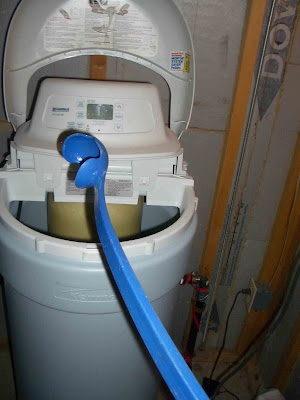 The water softener and the professional tool (Cassy's Chuck-it, sorry Cass) I used to remove the mice. 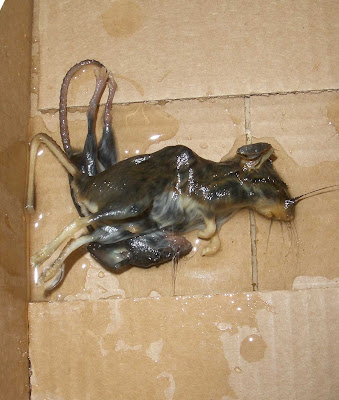 The actual bodies before they were laid to rest in last week's garbage. I'm not sure how they got into this 4 foot high tank, but they are crafty little buggers.
After removing the mice, I started reading the (long) manual on how to backflush the water softener and got as far as the part that talked about pulling the brine water (which was still full of bits of dead mouse) into the cleansing beads before I took a deep breath and shut the lid. I then fortified myself with a beer and went back to the loom. I'd figure out the water softener another day. 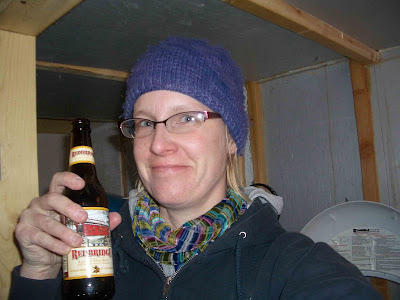 Three weeks after the second freezing of the pipes in the school-trailer, here is the progress made by those intrepid maintenance guys (I mean no disrespect to that lively group of truck-driving, tool-carting guys. I know they're busy... I'm pretty much guessing I won't be living in that trailer until the daisies start coming up. I have plenty of experience living with no water and am quite happy to do this for awhile, but there is also a little problem with the heater involving carbon monoxide. And I definitely don't want to die in a trailer.)... 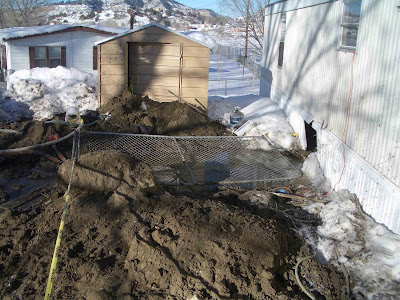 Yep, that is a pool of water flowing from under the trailer. There was a can of Red Bull on the porch last time I went by. Clearly this problem requires caffeine, a backhoe, and perhaps some warm summer days to fix.
Note: Currently my straw bale house still has some water issues, but the water pressure problem which had me looking like Jerry Seinfeld in that Seinfeld episode where the landlord installs the low-flow shower heads and Jerry and Kramer's hair is completely flattened, is fixed for the moment. My well was bleached, there is still iron staining my sinks, and I am drinking bottled water (something I usually disparage)... but heck, life in rural NM goes on and I have to say, I love it. As far as the rural school job goes, I believe Cassy and I will be staying in hotels for awhile longer. 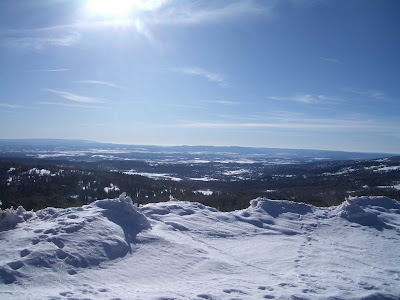 Shot from Highway 64 between Tierra Amarilla and Tres Piedras...
Posted by Rebecca Mezoff