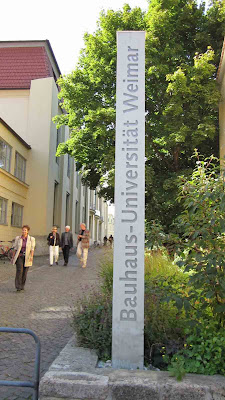 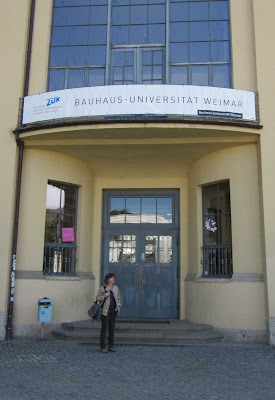 I had to make a pilgrimage to Weimar while in Germany... and Weimar is literally within hiking distance of Erfurt, so I had to go--except I took one of the marvelous German trains. I wanted to see the Bauhaus University and museum there since our project WAS about the Bauhaus. We went into the Bauhuas University building, which is currently used again by the new Bauhaus University. Conni and I wanted a photo reminiscent of the famous photo of the weaving workshop on the stairs. The stair is beautiful and we did take photos there. 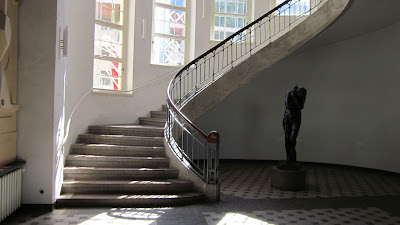 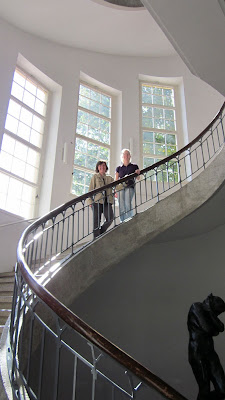 Unfortunately later when I was in the Bauhaus Museum I saw a postcard of the famous photo and realized that the stairs were actually in Dessau, not Weimar. We didn't make it to Dessau on this trip, so we'll have to get the Bauhaus weaving workshop photo another year.

The Bauhaus Museum was not very large, but many of the descriptions were translated into Enlgish which was helpful (considering I speak no German). I was surprised to see how different some of the objects displayed were from my mental reconstruction seeing photos in books. The famous teapots were so much smaller than I imagined--and seeing them for real, I suddenly loved them. Unfortunately the chair Gunta Stolzl wove the seat and back for that is in so many Bauhaus publications was on loan to another museum. 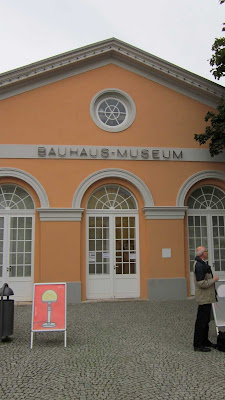 Also unfortunate was that only Maria and Emily went into the museum with me and so I missed the gelato that was being enjoyed outside by everyone else. I guess sometimes ice cream must be sacrificed for the sake of education.
Walter Gropius and I... 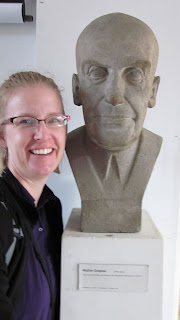