The German opening for Interwoven Traditions: New Mexico and Bauhaus was September 5th in Erfurt at St. Michael’s church. The show and opening was the reason I went to Germany, but I came home with so much more than I expected. I thought when I decided to do this project three years ago and ultimately go to Germany for the show that it would add something international to my resume and garner me some recognition for my tapestry. It turns out that none of that was important.

People and culture, friends and collaboration, language and communication…

The opening was different than an art opening in the US. Of course most art openings here aren’t held in buildings that are 900 years old. Michaeliskirche is a rather oddly shaped church which may at one time have been a synagogue. I believe Martin Luther preached there, and Frau Hecker showed us the slot where people put their indulgences before the Reformation (see photo below). It was cold in there and somehow that made it seem older. Gravestones that probably used to be on the floor of the church now line the walls and are set upright in the courtyard. There are so many layers of history not only in this church, but in the entire city, it is difficult for an American who has not done much traveling outside of the US to understand the accretions of time and layers of history in all the buildings in the medieval city center. The constant exposure to buildings that had been used and reused over the last thousand years and were beautifully renovated and used still today was humbling. 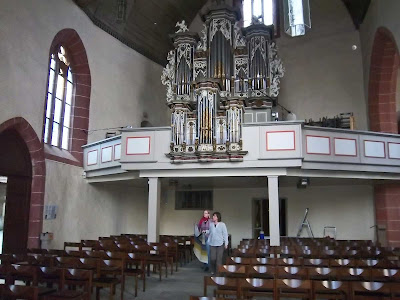 Our opening began at 5pm with an organ concert given by Andrea Malzahn which lasted most of an hour. As a former student of organ, I greatly enjoyed the reverberations of J.S. Bach coming from the tracker organ in the choir loft. I thought it a fantastic way to celebrate the church, the music, and the beginning of the show. The church was filled to capacity with standing room only. After the concert, Frau Hecker (the woman who takes care of events at the church and accepted our show there) gave a short speech. Conni translated for me while she was talking and I found it fitting that she was officially declaring the show “open”! It was like the concert and ceremony were an hour-long introduction of our work and now the show was ready to be seen. Conni thanked people in German and then I did so in English. Frau Hecker gave us a small gift from the city of Erfurt (hand-made chocolates!) and then we were all ready to drink champagne. 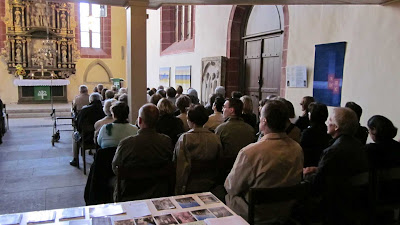 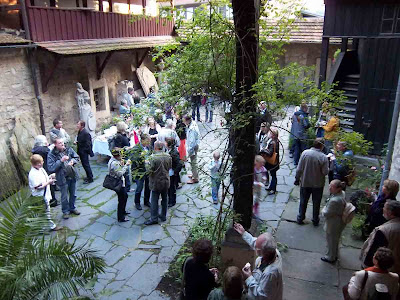 It was a beautiful evening and people stood around drinking and talking for an hour or so in the sun-streaked courtyard lined with gravestones and stone monuments. There were so many people who I did not know with various levels of English proficiency who told me how much they enjoyed the show. (I appreciated that even people who spoke very little English told me they liked it in my language.) When we were completing the hanging of the show earlier in the week there was a German woman who was touring the church. I was standing on the ladder adjusting Contemplative Garden and she looked up at me, gave me a big grin and a thumbs up and said, “Super!” And at the reception, my favorite compliment came from a 6-year-old named Leonard who does not (yet) speak English. He dragged his mom over to tell me that Contemplative Garden was his favorite piece in the entire show and that his older sister agreed with him. 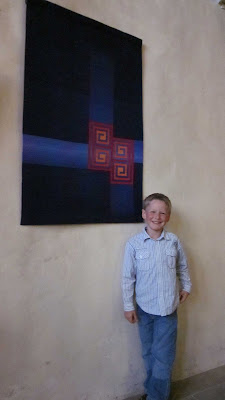 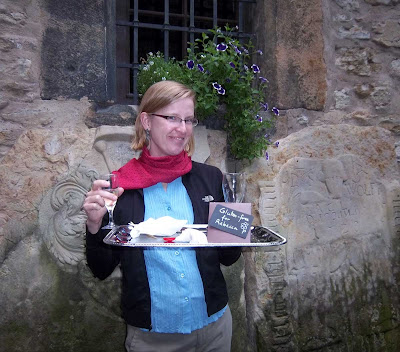 There was so much love and laughter shared in those days. The friends who were there from the US and the new ones I made in Germany were all so supportive and warm-hearted. The good words from Maria Wilson who (along with her husband Quentin) attended not only our show in Albuquerque, but came to Germany to see the show there were especially important to me. Maria is a talented tapestry weaver and colcha artist whose powers of perception in many areas of life are wonderful. I also gained so much from my collaboration with Conni. Having a colleague who you can bounce some of your more unconventional ideas off of and who will tell you what she is thinking about her next project or about art in general is a great gift. We may well do another show together, so watch for us in Weimar in 2012! And it was good of James Koehler to make time in his busy schedule to come to the opening in Erfurt and to bring his work to display along with his students. 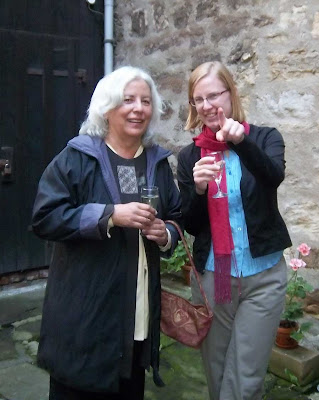 An experience like this project and international show pushes my boundaries. That is, I hope, the real definition of education. I gained a much larger (though still definitely nascent) understanding that there is an art world out there much broader than the one I have thus-far experienced in the US. I can learn other languages and about other cultures and I can benefit from the work of tapestry weavers and artists in other mediums outside the confines of my American world. (Thankfully! though there will always be much for me to learn on my home turf.)

My goal for the last few years has been to do things that broaden my world and make it bigger. This show has definitely done that.

**Due to multiple factors involving a car fair in Frankfurt, bratwurst, schnaps, Austria, bronchitis, and Thuringian newspaper reporters, I did not get a chance to return to the church and take some good photographs of the show hanging. Fortunately Cornelia is a much better photographer than I and I am sure she will share some of her photos with me and allow me to post them here soon. 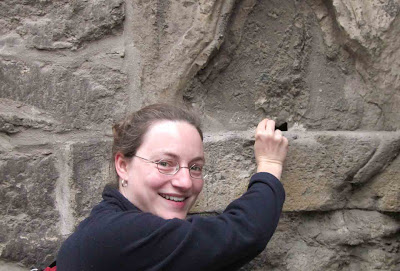 Emmy paying for some future sin... ? 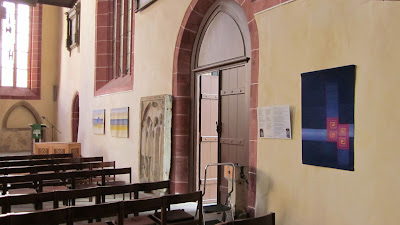 Cornelia Theimer's Tomorrow I and II and Contemplative Garden 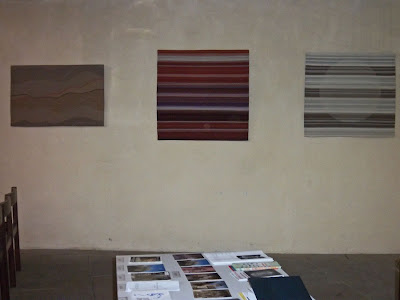