Every year (if I possibly can), I go to the Taos Wool Festival.  Emily says this is because "that is where my peeps are."  I'm not sure if she is talking about the alpaca, the churro sheep, or the people (or maybe just the cinnamon almond vendor), but I do enjoy spending some time there every first weekend in October.

The Taos Wool Festival is run by the Mountain and Valley Wool Association and this was their 25th year.  Their mission is to promote Colorado, New Mexico, and Texas wool, animal fiber, and their products.  For more information, their website is HERE.

I usually buy a t-shirt... and I liked the logo a lot this year... but even though it was only Saturday afternoon, they were out of any shirts in my size in a color I liked, so I settled for this photograph. 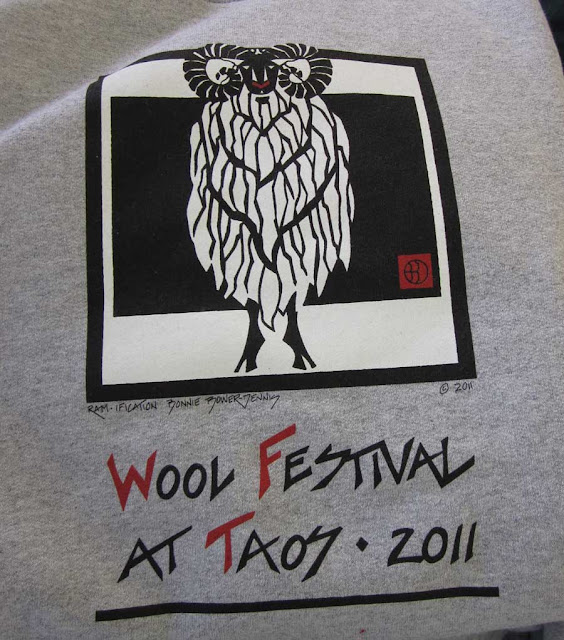 Disclaimer: no animals were harmed in the making of this blog post... and there are some shots of a naked churro sheep so if that sort of thing makes you woozy, you might want to skip the rest.

There are lots of animals every year and I love seeing the angora bunnies.  This little girl settled in to get acquainted with this rabbit. 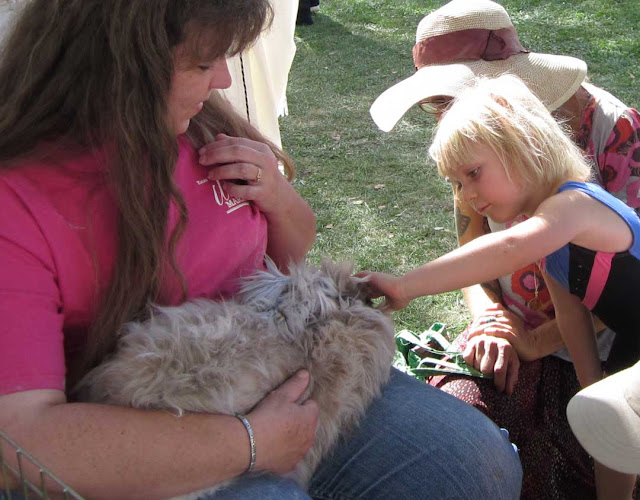 I think this one is giving me the bunny evil-eye.  Admittedly I was stalking him with my camera and I couldn't get him to hold still enough to get a clear shot that included his long shaggy ears which stood straight up.  The woman minding the bunny cages said he was an English angora (I could have that wrong, things were a little confusing at that point)... and his ears were a hoot!  He wasn't amenable to a photograph though. 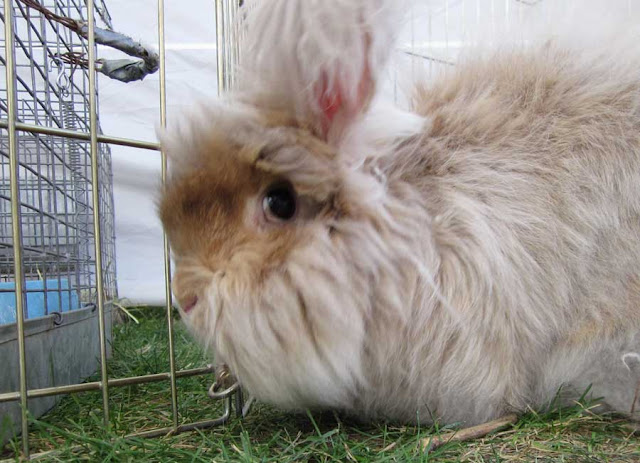 There was a pen of Navajo Churro sheep and we did get to see one shorn (turn back now if you don't want to see the naked sheep!).  Churro are the prize sheep of the Navajo.  I recently watched the movie "A Gift from Talking God: The Story of the Navajo-Churro" which you can find out more about HERE.  It is a wonderful documentary about how the churro sheep were almost wiped out and brought back to use in this region of the United States. They are highly prized for their double coat and their low-lanalin fleece as well as for their meat. 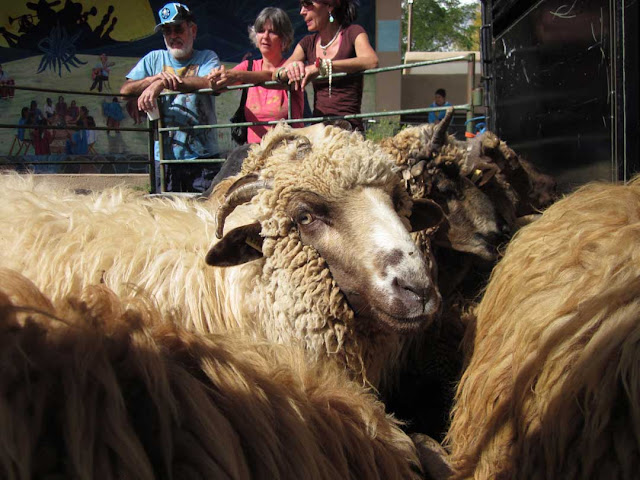 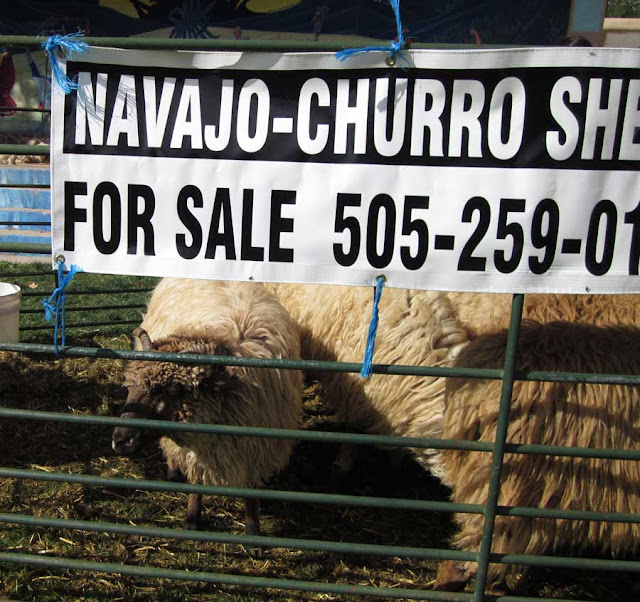 I don't know the name of this sheep shearer, but he was fast and I didn't see any sheep blood flying either.  It amazes me how the sheep just lay there.  About 6 years ago I saw a traditional shearer in El Rito using clippers shear a sheep almost as fast as this man did with his electric set-up.  When the sheep is turned upside down, they just go limp.  Robert, the El Rito shearer, told me that it was hard-wired into their brain because they are prey animals and when they are flipped over they are most likely going to be killed, so their brains just shut off. 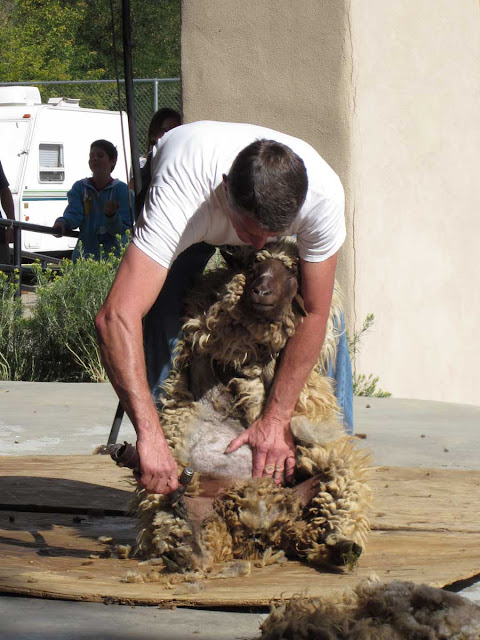 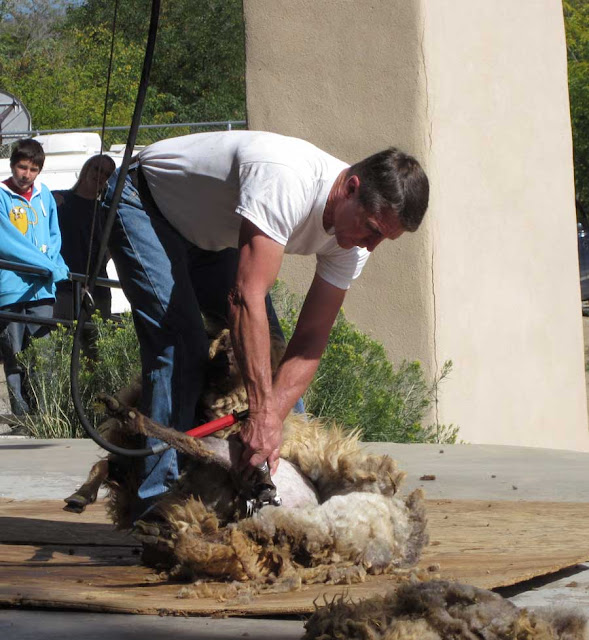 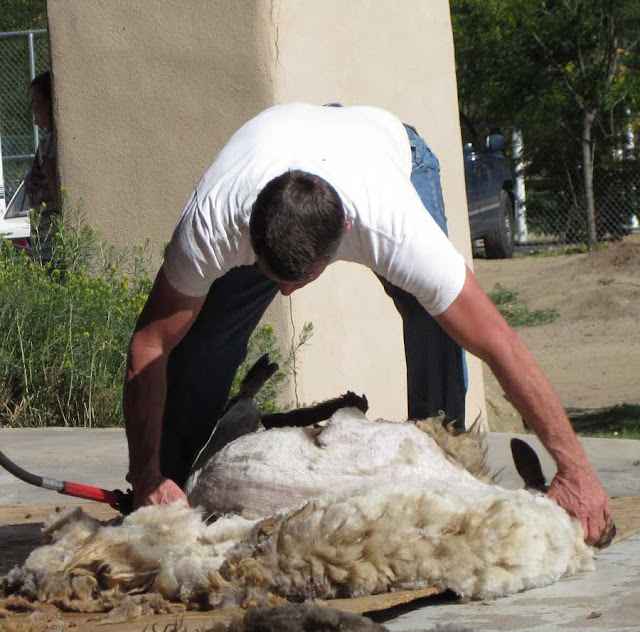 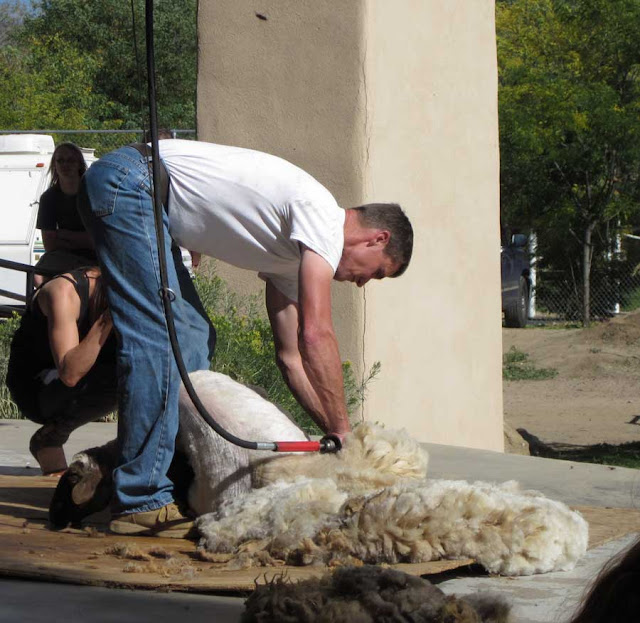 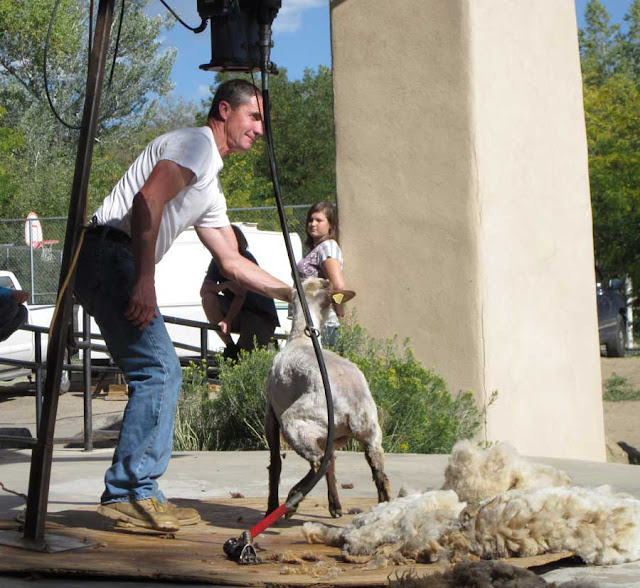 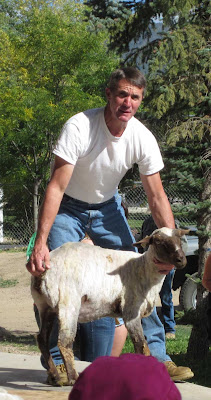 The whole thing only took a couple minutes.
Here he is after being let back into the churro pen.  I'm pretty sure at this point he was thinking, "Whoa, something is radically different..." 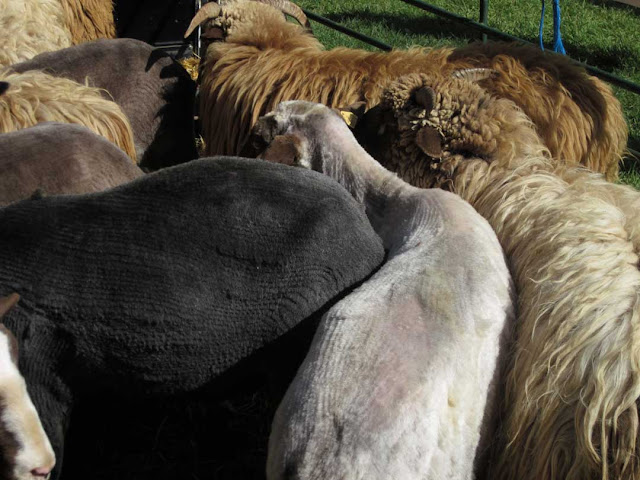 There were alpaca, which are my favorite.  This one was crying and the handler said they make the whimpering noise when they are distressed.  By Saturday afternoon he had probably had too many people taking photos of him.  Sorry dude. 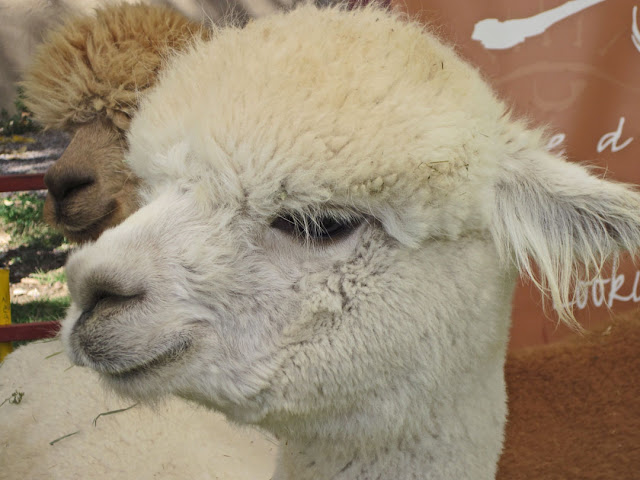 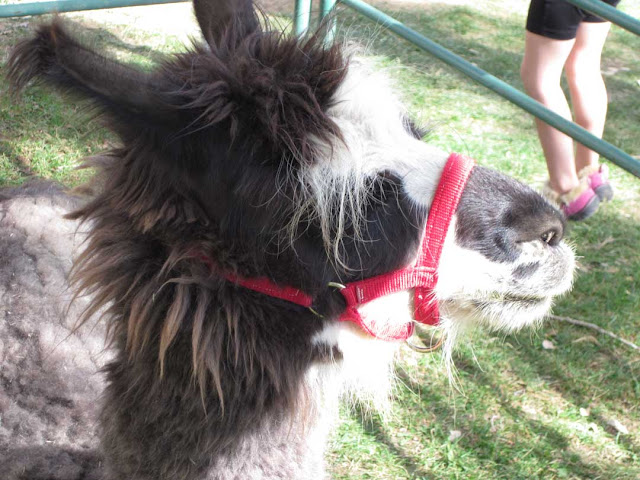 And there were dogs everywhere. 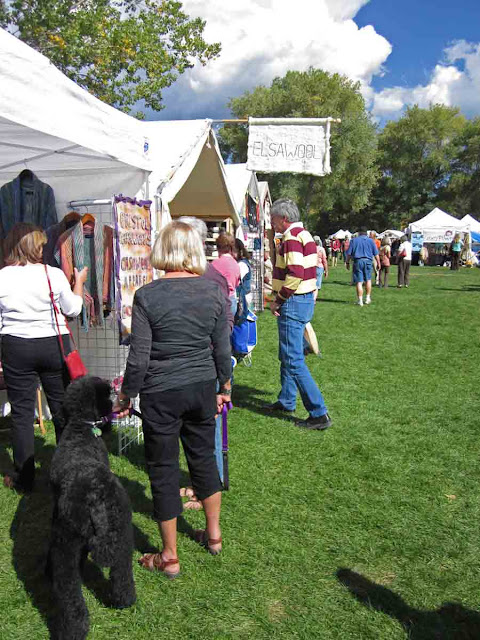 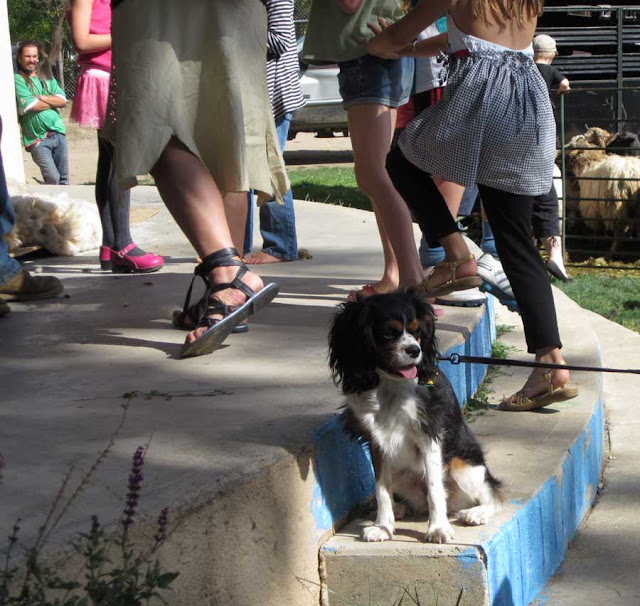 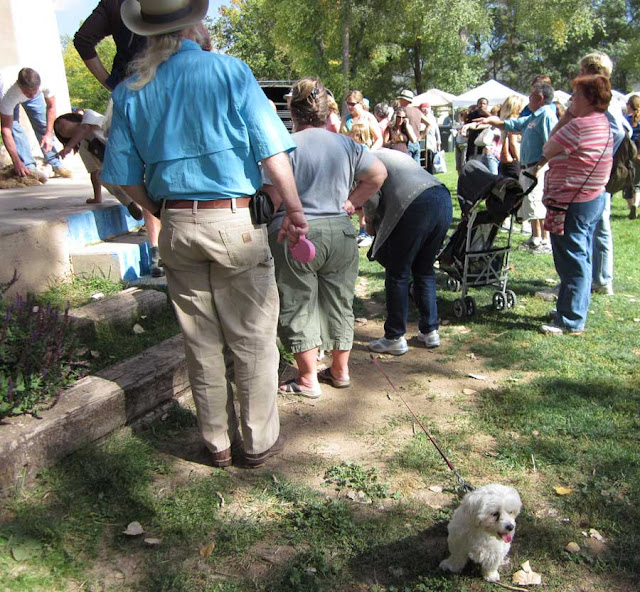 And of course we can't forget the actual fiber booths.  There were marvelous tapestries and rugs by Fred Black, Bettye Sullivan, and Alex George Sullivan.  When I got to the Sullivan's booth, the person wearing Bettye Sullivan's name tag was definitely not Bettye (and I had NOT had a margarita yet).  It was Julie Cloutman of Taos Fiber Arts who was running the booth for the Sullivans that day.  Julie was sporting a fantastic pair of knitted (or they could have been crocheted, the artist is multi-talented) earrings.  The artist was the offspring of the people running the felting booth next door.  Here are the earrings and Julie with the artist himself.  I regret that I do not know his name, so if anyone does, please comment and I'll credit him!  He did win a ribbon in the youth competition for a rather conceptual piece of crocheting which was a long chain with loops--aptly titled "Scarf".
10/9/11: And Martie of Taos Sunflower  just told me that the young artist is Chakotay Mitchell, son of Merce Mitchell of Pure Felt.  Thanks for the information Martie (your yarn shop was my very very favorite for so long, but I sure understand the need to do other things!) and to Chakotay for his great fiber art! 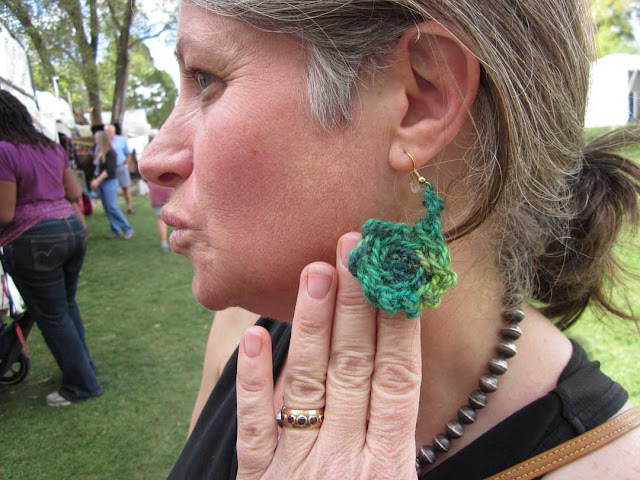 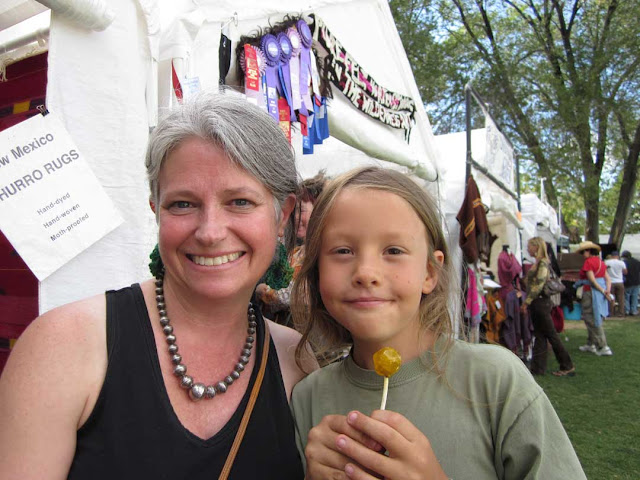 There were marvelous signs, and of course fantastic amounts of fiber. 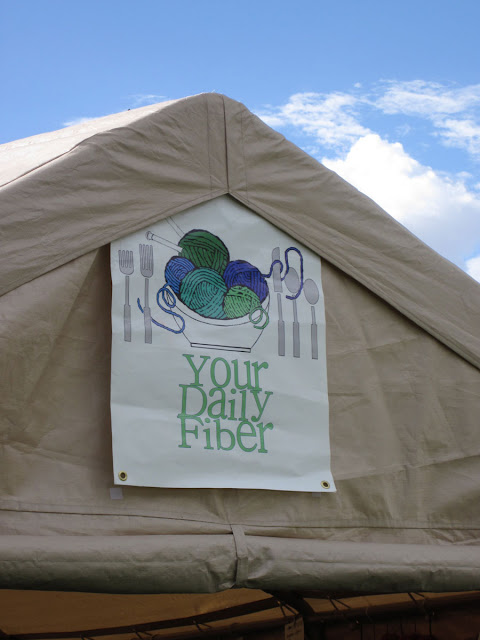 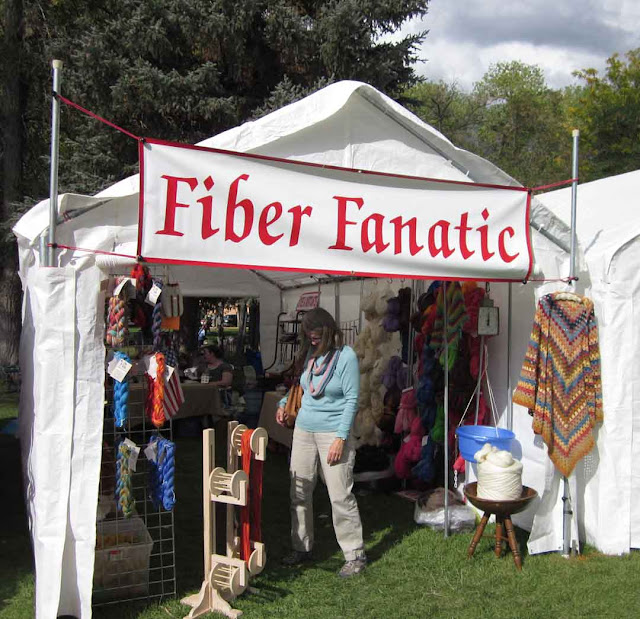 I'm kind of sorry it is over for the year.  I didn't buy any yarn.
Posted by Rebecca Mezoff