This post is the continuation of my series of blog posts discussing the five Denver Art Museum videos about James Koehler.

James Koehler was a Benedictine monk. He lived for about a decade at Christ in the Desert monastery in Northern New Mexico and this is where he learned to weave.

James talked about needing to weave as a meditation while at the monastery. When talking about why he left the monastery, he often sited the fact that the new prior would no longer allow him to spend his private meditation time at the loom.

In his own words:


When I entered the monastery in 1977, there were only six monks. In many respects, it was like a family. We met every morning to discuss some aspect of the Rule of Saint Benedict and to take care of community business. The prior acted as a moderator who helped us come to a consensus on any decision that had to be made. In many respects, we were a young and idealistic community.

In 1983, the Monastery of Christ in the Desert was received as an independent priory into the English Province of The Subiaco Congregation of the Order of Saint Benedict. Consensus was no longer our modus operandi. Clear lines of authority were established along with a system of anonymous voting on important issues. Our Customary, a document that described our daily life in great detail, was rewritten by the prior. Many of the ideals that drew me to monastic life at Christ in the Desert had been written out, and I now found life there to be increasingly difficult.

For many years, I was able to arrange my schedule so that I would be able to weave whenever possible. Brother Philip had encouraged me to explore the creative process through my weaving as a way of experiencing the Creator. But now, I was allowed to be in the weaving shop only when I was scheduled to be there during work periods. I was to spend all of my personal time alone in my cell.

That was really difficult. It was at the root of my discontent, and it started a struggle for me that lasted a whole year and a half. I kept asking myself -- Should I really be here?

One of the things that James modeled for me so well was his ability to focus. He could focus on his work to the exclusion of everything else, whether that was a good or bad thing for life overall. When he was working, he was working.

In this video, Barb talks about his use of the golden mean in his work. He taught this frequently in his classes and he used the proportions of the golden mean in all of his tapestries, from the outer dimensions of the work to where to place certain elements. I am not quite sure that my statement, "Every single design he ever did was based on that" is true, but he did emphasize sacred geometry heavily.

Here is the video where Barb and I discuss James' ability to focus and his feeling that weaving was meditation for him.
If you get these blog posts via email updates, you'll need to go to the internet to view the video. You can see it in your browser on my blog here: http://rebeccamezoff.blogspot.com/

Near the end of this video Barb talks about how he applied the golden mean ratios that he loved to color dyeing. I am not sure the actual dye ratios were based on the golden mean, but they were definitely based on a mathematical progression. And then of course because he was using a singles yarn and mixing at least three colors in each bobbin, the color choices became so vast that he labeled every bobbin.

James used Aubusson bobbins to hold his yarn. He would write in pencil the numerical tag that he had created for each combination of yarn on every bobbin so that he could keep them straight. He wove on a 100 inch Cranbrook loom which had a tool tray hanging at eye-height the entire length of the loom. Frequently that tray was completely filled end to end with Aubusson bobbins with little penciled numbers on them.

Below is one of James' artist statements, written for the Interwoven Traditions: New Mexico and Bauhaus project and show we did together with Cornelia Theimer Gardella. You can read more about his life and work in his autobiography, Woven Color, available now on Amazon.

Tapestry focuses on the creative, constructive process.  My woven images reflect the relationship of this process with the rhythmic, repetitive and unpredictable processes inherent in the natural world.

I am influenced by the extraordinary landscape and the unique cultures of New Mexico and by an aesthetic of simplicity, purity and portraying only what is essential. The source of my design inspiration often is found in meditation.

James Koehler is an internationally recognized tapestry artist whose work can be found in several museum, corporate and private collections.  He began weaving in 1977 and has worked with numerous students since the mid-1980’s.
_______________________
This image was one that I took at Convergence 2010 in Albuquerque, New Mexico. It was the first day his book was for sale and he was taking his turn at the author's table, signing autographs. 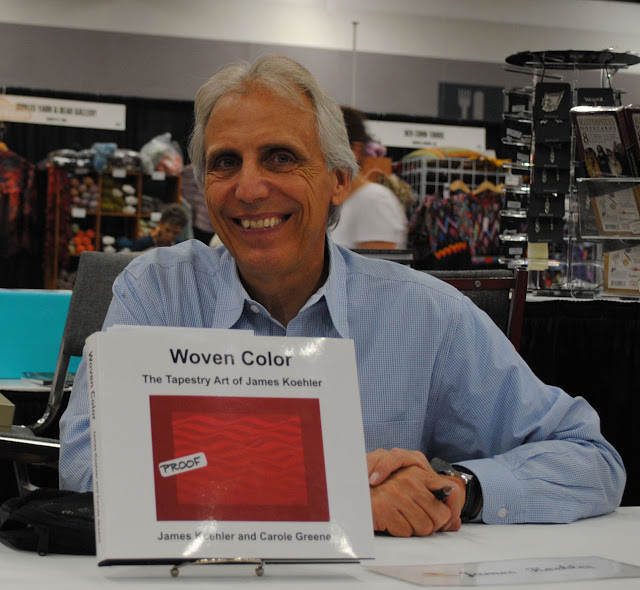