You know that thing that happens when you're watching a show on Netflix (does anyone watch network TV now? We watch TV by picking a show and watching an entire season in a weekend) and the Doctor Who episode comes to an end and as the credits of the episode you were watching and were DEFINITELY going to go to bed after seeing roll, they've started the next episode in the other half of the screen. Before 5 seconds have gone by you've been sling-shotted into another 45 minutes just to see what happens. They're damn smart those TV people.

That is kind of how life has felt recently. Flung from one thing to the next. Putting out fires. Ignoring others and hoping they don't do more than smoulder for a bit. Some of it is trying to busy my way through missing my old dog Cassy. Some of it is trying to stay ahead of the metric ton of entries for American Tapestry Biennial 10 for which I am one of the co-chairs (you can still enter! See details HERE). Honestly, I am waiting for my personal server to crash in the last week before the deadline.

I went to the vet today to pick up Cassy's ashes. I was trying valiantly not to cry so the receptionist could actually understand why I was there without a pet in tow. When I left with the surprisingly heavy tin, I was digging in my jeans for a tissue, and my mind ran off again to the car parked next to mine. It was a silver Subaru Crosstrek.

One particular bit of paranoia has surfaced since Cassy died. See, exactly 14 years ago, I bought my first real adult bed (I had just ended a long sleeping-on-the-floor-because-it-was-good for me phase and I was single and hopeful--I bought a queen), adopted my dog Cassy, and bought my first car all within a few months of each other. This past summer the bed was replaced, the dog died two weeks ago, and so it is hard for me not to think that the car with approximately 244,679 miles on it is the next to go. The problem is, I'll need my next 259 paychecks all at once to drive home that little silver AWD hatchback without a car payment (I'm opposed to car payments). Good thing I fixed my bike today.

After flying through the card aisles at Target (baby shower card in Spanish), I have been trying to finish the piece that came off the loom a few days ago. Feeling both blessed to be in my own studio right this moment and also like I am soon to be launched into the next Doctor Who episode and there is nothing I can do about it, I keep sewing in the ends. Practical or not, I am a woman who sews in her ends.

But life can go on just like that. We run from one thing to another so fast we miss the details. I think being an artist probably means you have to pay attention to the details. How can you create if you can't feel? How can you feel if you're watching the next episode before the current one is over? All well and good to say, but how does one simplify it all? And how to pay the rent and still have time to smell the flowers? I'm sure there is a way and in one of these episodes I'll discover it. 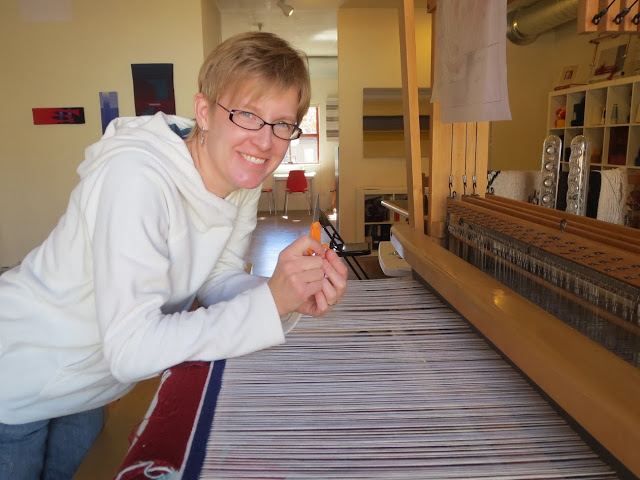