Well, a turn of events yesterday kept me off the loom for the rest of the day.  But I did get a piece in a show in Santa Fe as a result, so I guess that is good.
Go see the show if you're in Santa Fe:
It is called Hard and Soft: Works from New Mexico Ceramic and Fiber Studios.  It is in the Community Gallery which is on W. Marcy street at Sheridan.  The opening is from 5 to 7 tonight.  There are some great pieces in there! 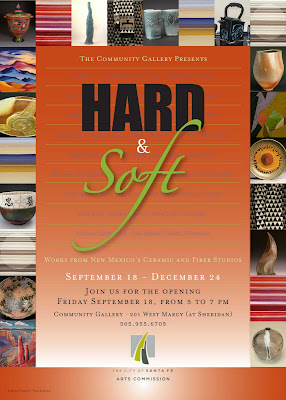 I know that there are some great pieces in there because I got a sneak peak last night at 3:59 after I arrived breathless and disheveled in the rain clutching my little piece in a plastic garbage bag praying the fabulous director of the gallery had not left at 3:59 instead of 4.
See, I made a little boo boo with this show.  I'm trying not to feel too stupid about it, but really I should have made some entries in my day planner about this event... in which case none of this would have happened.  I failed to write down the day that the work was due in the gallery--which incidentally was actually August 29th NOT September 17th.  But the fabulous Rod Lambert, and I quote him saying, "I work with artists, I know about you guys," allowed me to rush my fool head down there and bring him the work for his last remaining space just in time for the opening today.
As I was running through the rain (I forgot when I told him I could get from Velarde to downtown SF in 45 minutes that not only is there the mother of all construction projects in Espanola, but that I would have to find parking in downtown Santa Fe in order to deliver the piece.   Fortunately for the parking it was raining... and I found a spot a few blocks away--even had quarters in my pocket for the meter!)... a man who may or may not have been homeless tried to engage me in conversation.  Being a kindly person, I usually do talk to homeless people... after all, one of my favorite patients at the county hospital in Reno, NV was a schizophrenic homeless man who's girlfriend (also homeless) brought me a little plastic tree with round decorations on it from the dollar store... best present ever from a patient.  They (the homeless people especially when schizophrenic) have an interesting take on the world sometimes--sometimes they need mental health assistance.  Anyway, this man was polite but after a few seconds, I found myself gasping, "I'm LATE!" and running on, stepping squarely in a large puddle and soaking my leg as I ran down the block toward the gallery hoping Rod had not left me standing on the sidewalk dripping wet clutching my little tapestry wishing I was inside with it hanging next to the tag that had my name on it...  Fortunately Rod, in my brief association with him, proved to be an incredibly helpful and kind individual who did a bang-up job hanging this show!  (And did not leave me dripping on the sidewalk.) 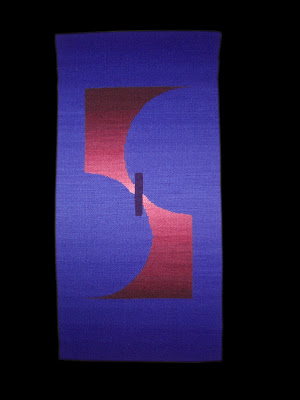 Anyway, it looks to be a great show!  There is some awesome fiber work including a fabulous piece by Julie Wagner, a beautiful weaving by Irene Smith, and some mixed media fiber by
Kathleen Vanderbrook.  The pottery also looked great in my hurried survey of the gallery--sorry potters, I was focusing on the fiber.  I have a little piece in it called The Space Before Knowing that I wove in 2007.  The show specified pieces that were in the 2 foot square size range, and as everything I've done recently is much larger than this, this little piece got to go to Santa Fe all by itself.  Plus then I got to go and visit the new Collected Works bookstore... that was awesome too.
Go see the show!  It looks great.  I think it will be hanging through the end of December, 2009.
Posted by Rebecca Mezoff 2 comments: 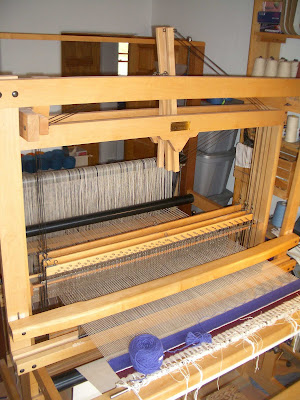 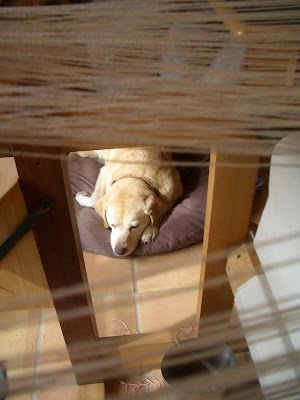 There is nothing so comforting as an old yellow lab sleeping in the sun next to your loom...
Posted by Rebecca Mezoff 2 comments:

Art as a practice

I just saw the movie Julie and Julia.  I enjoyed it.  In case you haven't seen it, the premise is that a young writer named Julie Powell is working her way through all the recipes in Julia Child's French cookbook in a year and blogging about it (no, I haven't missed the irony that watching a movie about a blog got me blogging--something I haven't done in a month it seems).
My questions as I left the theater were simply these:
Can weaving be a practice that is done daily like Julie's project?  and what is the value in that?
Is a project like this a good way to learn focus?  Focus seems like a necessary ability for a tapestry weaver or nothing is produced.
How is it that I haven't woven anything since Emergence came off the loom in June?  How does life slip away like that?  We only have this one short and precious life.  To let the days slip by unnoticed is not the way I want to live it.
Tommye Scanlin is weaving a calendar tapestry--one block for every day in 2009.  This idea is perhaps starting to get at my nascent thoughts about focus and having a project that moves you along one day at at a time.  And her calendar tapestry is really interesting!
And there are more thoughts about art as a spiritual practice.  What else can it really be anyway?  Most of us aren't going to make a living off of it, and so I think we have to do it because it is what we love and making art is what helps us see our own soul.
Editor's note (okay, I don't have an editor, it's just me):  I wrote this post on the date you see but am just "finishing" it today... hmmm, lack of focus?  Too much going on?  I have finished a piece since this post.  Yeah!  Ready for another one.
Posted by Rebecca Mezoff 3 comments: