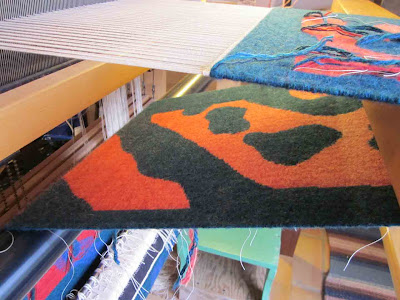 I have been having a discussion with myself about this for awhile.  Do artists publish blogs?  I am serious about making tapestry and in doing that about expressing something important--I am interested in making art.  But I like keeping a blog.  It is a way to push myself to think about things and to try to reach out to the fiber community and maybe even to see what other people think.

I don't want my blog to just be random carpet sweepings from the recesses of my mind however, and sometimes I don't censor what comes out quickly enough.

I have just been listening to Syne Mitchell's WeaveCast radio show.  I learned of it recently when someone recommended I listen to her interview of James Koehler.  (It is a wonderful interview, so go listen.)  I realized today when searching her archives that she has interviewed a great number of tapestry artists.  I love this technology and that someone has gone to the trouble to put together these great interviews and share them with the rest of us.  James Koehler, Sarah Swett, Michael Rohde, and Mary Zicafoose are the tapestry artists I found.  She also did a wonderful interview with Claudia Chase of Mirrix looms in which I found out the looms are assembled at a place called Sunshine House which is a workshop for the developmentally disabled.  As an occupational therapist who has worked extensively with this population, I love that!  I am so thrilled to find that my loom was made not only in the USA but by people with developmental disabilities.  Thanks Claudia!  (No, I have no affiliation with Mirrix, I just love their looms--and most of my weaving is done on huge floor looms.  My Mirrix is my "fun" loom.)

So all of this got me thinking about blogs and whether they were just more word-making clutter in our already bursting worlds, or if there was anything constructive to add to society/the world/humanity by participating in the blogosphere.  I'd say that Syne Mitchell has made a very positive contribution to the weaving community with WeaveZine.  But what about my little blog?  Is it just distracting me from the loom or am I contributing something?

I think that many artists have this aura of secrecy about them and their work is their communication with the outside world.  (Though it does occur to me that perhaps they just don't have time to publish blogs.)  Do you have to keep all your methods a secret to be an artist?  I like transparency and would be happy to teach anyone my methods.  That doesn't make me less of an artist, does it?  The art world can be so fickle.  Maybe the important thing is only how I feel about it.

Probably what it comes down to is whether or not working on a blog is pushing forward my art-making or distracting me from it.  Does it complicate my mind and make me less available to ideas and creativity?  Is it just one more stream of words obfuscating what might be really important--lying silent and unnoticed (or avoided) in the recesses of my mind?  Or does it contribute something useful?  I am just not sure. 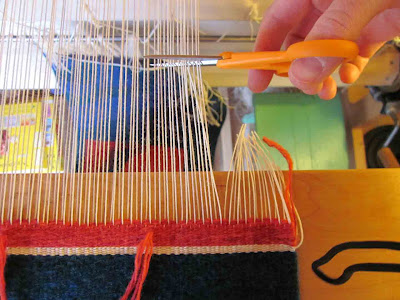 Yep, cutting another one off...
Posted by Rebecca Mezoff 6 comments:

I started weaving on a counterbalance barn loom sometime in the late 90s with some very helpful advice from the members of the Reno Fiber Guild of which I was happy to be a member.  I started weaving fabric and moved quickly to experimenting in doubleweave.  I loved the design possibilities and fairly quickly I realized I really wanted to do tapestry.  Recently one of the Reno Fiber Guild members told me that Jennifer Moore was coming to teach a class there... in Doubleweave.

Here is the perpetual calendar that the guild made--my entry was for March in doubleweave. 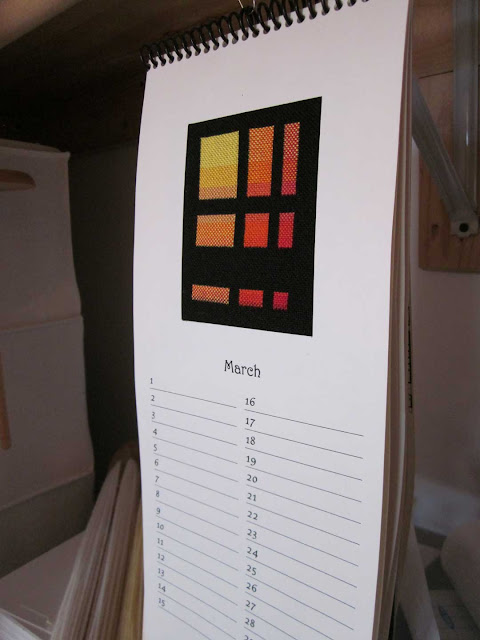 I left Reno in 2001 to return to NM and study tapestry.  I started out at Northern New Mexico College studying traditional Rio Grande tapestry with Karen Martinez.  Fairly quickly I started studying contemporary tapestry with the late James Koehler.  One of James' best students, apprentices, and colleagues is Jennifer Moore.

I was at the Center for Contemporary Arts in Santa Fe last Saturday for a lecture about women in the arts as well as a viewing of their current show "18 Days".  I did not have enough time to look at all the art, but I did see this...

That fantastic weaving is Jennifer Moore.
I looked a little closer.
Go see the show if you can.  It closes March 20th, so hurry! 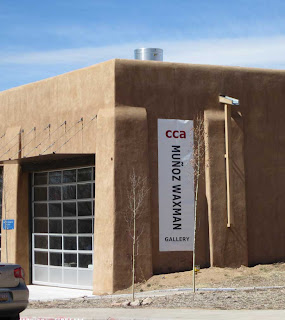 Synchronicity:
Reno Fiber Guild
Doubleweave
Jennifer Moore
James Koehler
Tapestry
Me today at my loom today wishing I could ask James one last question... but not quite sure what the question would be.
Posted by Rebecca Mezoff No comments:

James Koehler passed away unexpectedly March 3rd, 2011.  He taught until the day he died and I think that says something real about him.
(Update 3/4/13: James actually died on March 4th in the early hours of the morning.)

James occupies a complicated place in my heart.  He was a committed and exceptional teacher and was generous with his time and talents.  He loved teaching and felt that passing on the knowledge of creation – of making things especially in tapestry – was important.  My journey with James, which has come to an end before it should have, is marked by my own struggle to find my way as an artist while learning from an accomplished teacher who had some very specific ideas about tapestry and art.  We agreed on many things, and disagreed on others.  But one of the most important things that James taught me was about getting to the essential nature of something.  He believed that you have to question and ponder (and perhaps meditate) and understand who you are—and from that place you can express something that is meaningful and useful in the world.  I think that James was able to do this in his own art and he encouraged me to do this in my work.

I think of my years working in his studio and often remember things in pictures and in feelings—the brilliant wall of yarn that is in so many photos of his studio, the well-used student looms, the Cranbrook I used, the worn weaving tools the apprentices used to wind warp and yarn, his particular dyeing process so different from my own… I hear him calling from his 8 foot loom, “just let me know if you have questions!” And one older student saying, “I’m coming to a question now.”  James would invariably reply cheerfully, “I’ll be right there.”

James often said, “That’s bizarre!” and I hear his voice every time someone uses that word.  He loved stories and the studio was often full of chatter.  Other times he was focusing on something and only the classical music station would accompany the loom beaters clacking.

The door to Koehler studio was always open.  James welcomed visitors regardless of who they were and when they were showing up.  He could be hard-pressed to make a deadline for a commission but would stop weaving to give anyone who knocked on his studio door a tour.  He was unfailingly open-hearted with strangers and the pages in his studio guest book were frequently filled.

I was fortunate enough to get to do a three-year project with James and Cornelia Theimer Gardella.  We were hanging our tapestry show, Interwoven Traditions: New Mexico and Bauhaus in Michaeliskirche in Erfurt, Germany 6 months before he died—to the day.  There are some links to my posts about the two shows we did together, including photos, below.

James touched many people’s lives—perhaps we each knew a slightly different person.  But I know that the people who worked with him the most took something away from their experience with this extraordinary man which will live on even though he is now gone.  I have received many emails and phone calls from people expressing their condolences.  I want to thank you all for that.  I will miss him as will many many people.

I believe that this is an opportunity to look at James’ life and ask ourselves, those of us who benefited from his influence, what we can do in the future to carry on his work.  He was a strong supporter of tapestry as an art form and worked hard to have tapestry accepted as a mainline medium instead of being just a craft pursuit.  I believe that we as fiber artists have a long way to go to finish this work.

James, no one can replace you.  I thank you for your time and tireless energy and for being my teacher.  I hope that I can continue some of the work that you started especially since you had to leave so soon. 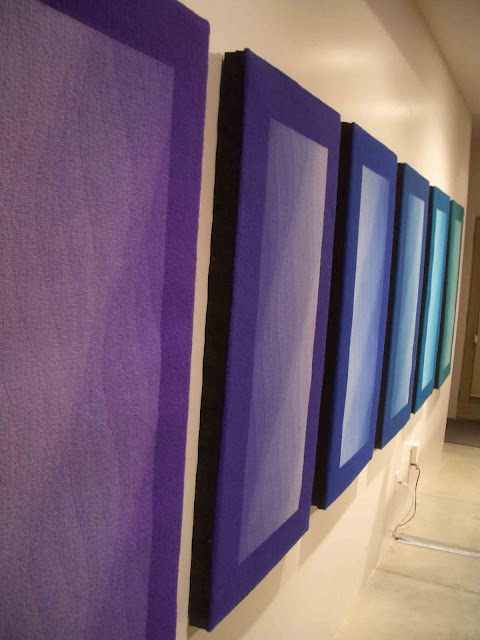 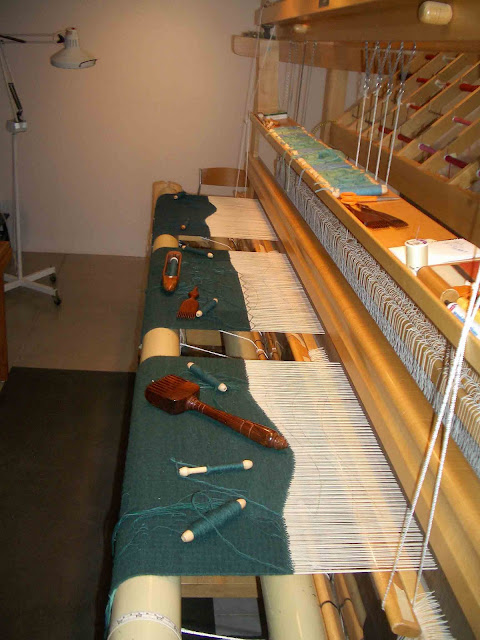 I have written about our project, Interwoven Traditions: New Mexico and Bauhaus before.  Here are some links to those posts:
The photos of the opening at Michaeliskirche, Erfurt, Germany.

Further photos of the opening in Germany.

James, Conni, and I hanging the Germany show.

Some photos from the Albuquerque show. 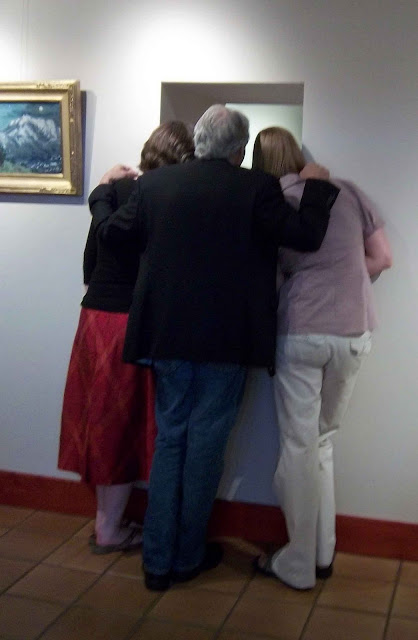