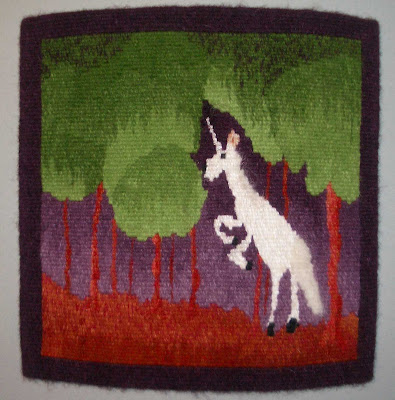 Here is the unicorn tapestry. It isn't my first commission, but it is my first commission from a 9 year old! It made me feel like an old-time tapestry weaver. Megan Swartzfager (age 9 at the time) designed this tapestry and I wove it pretty much exactly as she drew it. The tapestry is not as bowed as this snapshot shows--my zoom point and shoot creates this weird ballooning (yes I know I still need to get the new camera to photograph my work...). I had fun weaving this. It was the first thing I wove on a Mirrix and the only piece I have ever woven that was "realistic". Realism isn't my style (not that unicorns are necessarily real!), but it was fun to do something different. I used some weird novelty yarns to make the unicorn white and the tail fuzzy and the horn silver. It was a grand experiment and it ended up looking like the original drawing. I hope Megan is pleased. After the Enchanted Pathways exhibit at Convergence, it will go to her. She named the piece Mystic Moon. I think she might even make a visit out to New Mexico (she lives in Mississippi) to see her piece in the show on Canyon Road in Santa Fe. I hope in 2012 she has her own tapestry to submit.
Posted by Rebecca Mezoff 1 comment:

Tonight was Weaving Southwest's re-opening. They moved just down the street in Taos and the new space is much better... better location also. Congratulations Rachel and Teresa! 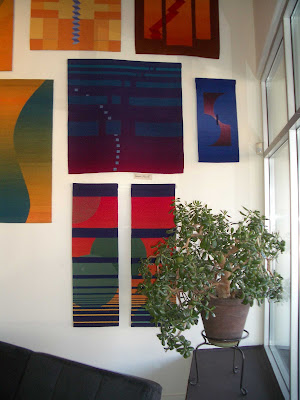 Three of my pieces : Awakenings III, The Space Before Knowing, and Meridians. They have sold my more recent pieces. I can't keep up with them and weave for upcoming shows. How do weavers do it? (I know, they never sleep or go hiking for 5 months at a time. I do hope they take magic carpet rides though... and read... and eat chocolate...) I was happy to have my work next to Karen Benjamin! She has always been one of my favorite tapestry weavers and I can't even tell you exactly why. I've never even met her, though she did go to my alma mater (Lawrence University). 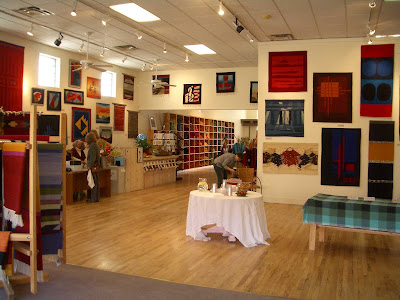 Somewhat magically while at this opening, out of the blue, the solution to a piece I've been trying to design in my head for months appeared. I don't know why or how this happens, but sometimes the right image just falls into place. It didn't have anything to do with any of the weaving there or even any conversation I was having--just got the right image and came home to figure out how to weave it. Finally! I've been mulling this one for months. Maybe it is because just before I left for the opening I cut the little piece for the ATA small format show off the Mirrex. Finish one piece, time for another one (not that there isn't another big piece on the Harrisville... small detail. That will have to be finished and the loom rewarped before the new one can be started.)
Posted by Rebecca Mezoff 3 comments:

...or "Why isn't tapestry considered an art form in many places?"
I was having this discussion with my weaving mentor yesterday in Santa Fe. It is a long-standing discussion which is pretty one-sided as we both agree that tapestry struggles to be recognized as an art form. A case in point is HGA's difficulty finding venues for exhibits during Convergence. We were lucky to get a venue at Open Spaces Gallery for our Bauhaus exhibit (Interwoven Traditions: New Mexico and Bauhaus), but many people were not so lucky. The small format ATA show ended up in Santa Fe and the ATB8 show didn't find a venue at all in New Mexico. I heard from HGA and ATA people looking for spaces that what they were hearing from galleries was that they only focused on "traditional" weaving. In New Mexico, that refers to the traditions of the Navajo and Hispanic weavers.
When I look at "fiber shows" I often am amazed at the poor craftsmanship that is hung on the wall and called art. It is an age-old debate, what constitutes art, but for me good craftsmanship is part of the equation. I think as tapestry artists, if we can't make good-quality work to start with, we are asking to be considered simply "craft." And this leads to situations where high-quality tapestry shows like ATB8 or an ATA show can't find a venue in a major American city--one that is steeped in art and surrounded by cultures devoted to weaving. ...just my beginning thoughts on the matter.
And for visual interest, a photo from a hike I took Saturday near Velarde, NM... an old adobe building that had a descanso inside it. 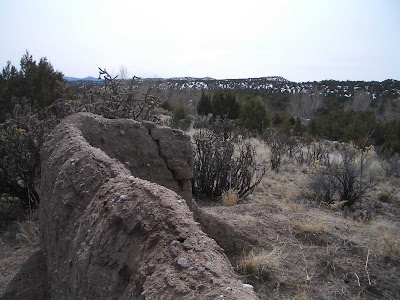 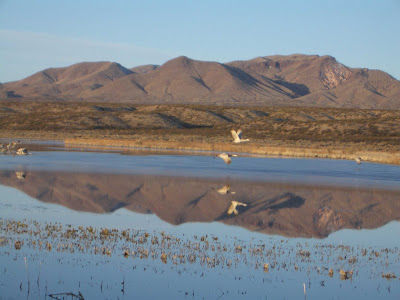 And here is a photo of some cranes at the Bosque del Apache during morning fly out a few weeks ago. I have watched them fly over my house in fast-moving clots of croaking sandhills through most of February. They seem to be gone now. When I was in the San Luis Valley a week ago, I was able to visit them again at the Monte Vista Wildlife Refuge. My Pentax point and shoot 4 megapixel is no match for the mega-cameras that appear at the refuge, but this shot isn't bad (at least at low resolution in small size).
Posted by Rebecca Mezoff 2 comments: