This is not the sort of thing I usually say, but I want to send a big shout out to my cousin Julie.  She is my only living relative (that we know of) who also has celiac sprue.
My cousin Julie absolutely ROCKS!  (And that IS something I would say.)  She made me (and my aunt and uncle) the best gluten free dinner I've had in forever... something amazing of the indian variety with lentils (she gave me the recipe.  I haven't dared look at it yet as I'm not sure I'll be able to come anywhere close... but maybe by the time I get home I'll get up the nerve to give it a go.)... she also made GF bread which is always a feat.  Add a little wine to this and I was completely overcome with the gastronomic delight of the whole thing.  Seriously overcome.
BUT THEN!!!!  She asked me to go to her favorite restaurant for lunch the next 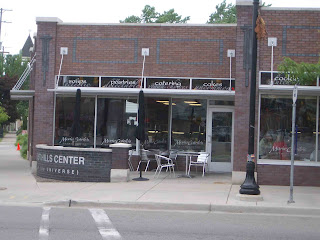 day--which I believe was only yesterday, though I'm losing track of time in this whirlwind trip around the US...  The restaurant is in Grand Rapids, MI and is called Maria Catrib's.  I was so impressed with the place (and especially Maria) that I took a picture of it when I left.  Maria who runs the joint brought us GF cookies as an appetizer.  I tried to buy her remaining stock when I was leaving the restaurant, and to my dismay, the remaining stock had gone into my stomach earlier in the meal and there were none to carry away in my suitcase.
I ate a grilled cheese sandwich.  This may very well not be something that impresses those of you who are not gluten intolerant.  For those of you who are, you completely understand me.  I was able to go into this restaurant and choose between something like 12 sandwiches AND I had a choice of THREE different kinds of bread.  I'm teary eyed just thinking about it more than 24 hours later.  And after my cousin returned to work, I had a big piece of flourless chocolate cake--to make up for the fact that I couldn't take any cookies home with me.
Posted by Rebecca Mezoff 4 comments:

The joy and pain of juried shows...

I entered two pieces into a juried show this spring.  Actually, I had a stack of shows I was going to enter--I think 5.  The Durango show was the only one I actually entered... largely because I'm going to the IWC conference and thought it would be most excellent if I got lucky enough to get into Fiber Celebrated a second time.  Both pieces were accepted.  Thank you to the jurying gods for that one!  I'm kind of a neophyte when it comes to juried shows and also when it comes to fancier get togethers involving the "art crowd."  Fortunately, fiber artists seem to be a little less "art crowd" people than some of the folks I've met in Santa Fe... and it is kind of fun to see my pieces hanging in different places.
Posted by Rebecca Mezoff 4 comments:

Sometimes the hardest decision is...

I'm going on a little trip soon.  The largest decision about this trip so far seems to be what knitting project(s) to pack.  The trip involves some time visiting a friend in the south (I do not anticipate any knitting time during this phase), a visit to my grandparents and aunt/uncle in Michigan (I see some knitting time emerging here), a drive circumnavigating Lake Michigan (I'm flying into and out of Chicago and I do not knit while I drive, honest), and a cousin's wedding in Wisconsin (again, I promise I won't knit at the actual wedding, but I can't make any promises about the reception... kick me if Aunt Matilda thinks I'm being rude).Of course there are three legs to this journey and I anticipate having time to knit on the plane.  I just checked the "what you can bring on board" page on Northwest's website--and indeed they say you can bring knitting needles onto the plane again.  Heaven help us all if someone like me gets cranky due to long lines, irrational airline rules (WHY do you have to take your shoes off to go through security?), and lack of gluten free goodies readily available in airport kiosks-- and starts brandishing her 16 inch #7 circulars!!! ...likely with scarf or hat attached.  Of course there is the possibility of getting trapped in one of those seats in front of the exit row that doesn't recline, squished between the window and someone who, shall we say, doesn't quite fit between the armrests of their seat.  Knitting does take a little elbow room.

We all make mistakes...

Sometimes we don't make the best decisions in life.  Take, for instance, this cabin.  I have some land in Colorado, and about a half mile away at some point last summer, a man came and put up this cabin which is about 8 by 12 feet.  I thought it went up pretty quickly, so I went to examine it after he was gone.  He had put cement blocks right on the sand, seated 4X4s in the blocks (no poured cement as far as I could tell so far) and attached the deck floor of the cabin to those 4X4s.  In no way was this structure tied to the ground.  I believe the man who did this must not be from around here as he seriously underestimated the force of the winds on the south side of a 14,000 foot peak in southern Colorado.  Just this week, less than a year later, this is what his cabin looks like.  I fear he will be unhappy when he returns to put the windows in and inhabit his little summer dwelling.  I hope he likes mice also because they are likely already friendly inhabitants. 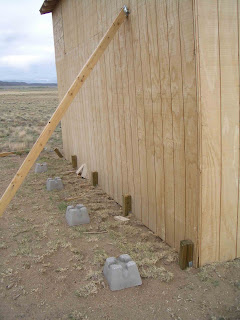 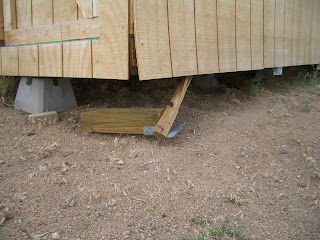 We do all make mistakes from time to time--or perhaps just miscalculations of large proportion.  I just hope if I ever decide to build a little cabin in southern Colorado, I'm smart enough to use some concrete.
Mostly this post is for my sister... she'll understand why.  As an architect and city planner, this cabin rankled.  It ticked me off just because it marred my view, being exceptionally ugly and poorly built.  My guess was it would last a few years, but to have the wind push it over in less than a year really boosted my admiration of the ferocity of southern Colorado winds.
Posted by Rebecca Mezoff 3 comments:

Progress on the petroglyph piece continues but seems slow.  One drawback (or perhaps advantage) to weaving on a horizontal loom is that you can't really see the thing until you cut it off.  Here is where I am: 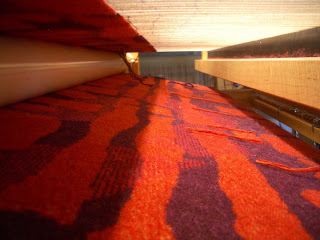 See what I mean?  Doesn't mean much and looks really weird. In fact this image is so disturbing to me that it throws the whole piece into doubt.  Everyone who sees me working on it says, "it'll be just fine."  But how do they know when this is all they can see?  It has been fun to weave, however, and I am looking forward to finishing the last of the 15 inches I have left.
Posted by Rebecca Mezoff 2 comments: 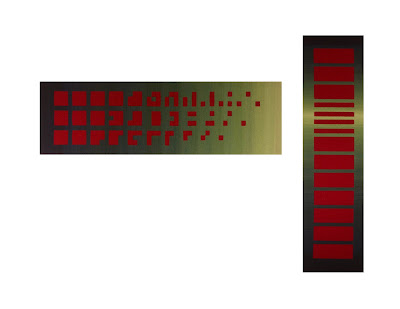 Finally here is a better photo of the piece Inscription.  The first entry about this piece is here with more detail about it.
Posted by Rebecca Mezoff 1 comment: