It is warm here today.  It feels like 70 though I think it is probably only 50 degrees Fahrenheit.  I am hoping not to have to use my tire chains for the rest of the year, though I would really like some more snow.  When it stops snowing early, the forests burn... and that is hard on a long distance hiker (not to mention the forests).

January 22nd, Weaving Southwest had an opening for their new show.  This is a frequent event and I don't always hear about them... but more frequent examination of the Tempo section of The Taos News has helped me find out about this one a couple hours before it happened. 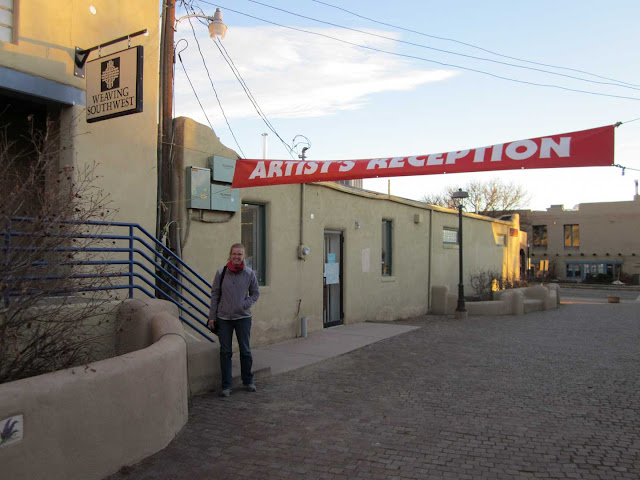 The show looked lovely.  There were some beautiful tapestries by Kathy Perkins that I hadn't seen before.

And here is a sneak peak at the piece I finished last month.  I am having some trouble getting a good photograph of it, so here is a detail.
I visited Weaving Southwest again Friday to drop off a photo book I had made of my work to show prospective collectors.  As I walked in the door, the lovely Tara told me she had just finished a check for me.  Isn't is great to walk into your gallery and have someone hand you an unexpected check?  It is a little less shocking than the news below...

In other news:
One morning last week I found this little guy on my dining room table.  "Dining room table" is a euphemism for "card table covered with bed-sheet table cloth."  In my defense, there is a REAL table, but it is currently in "Your Other Closet" somewhere in Mississippi.
I have never before seen a slug in New Mexico, but there he was plain as day, leaving a slimy trail across the spot I was going to eat my granola.  He was also deceased, having dessicated sometime in the night (he missed the memo on low humidity levels).  After some sleuthing I realized he had taken a ride home in a mint plant we had bought at Trader Joe's and placed on the shelf over the table. 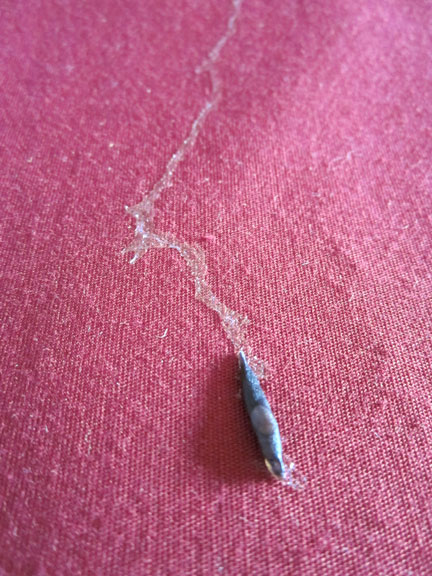 I just read a great interview with Polly Barton on a blog called Handful of Salt.  Polly makes the most wonderful ikat creations.  I can stand in front of her work forever (mostly thinking, HOW does she DO that?).  But once I get past the "Holy crap!  It is NOT possible to do that with fiber!" moment, her work is just stunning.  Her website is wonderful.  Check out her gallery.

She is teaching at Penland School of Crafts this summer.  Oh how I wish I could go!

Here is some of the yarn from my last big dye run in January.  Much of it isn't being used in the current piece, but will be in the future. 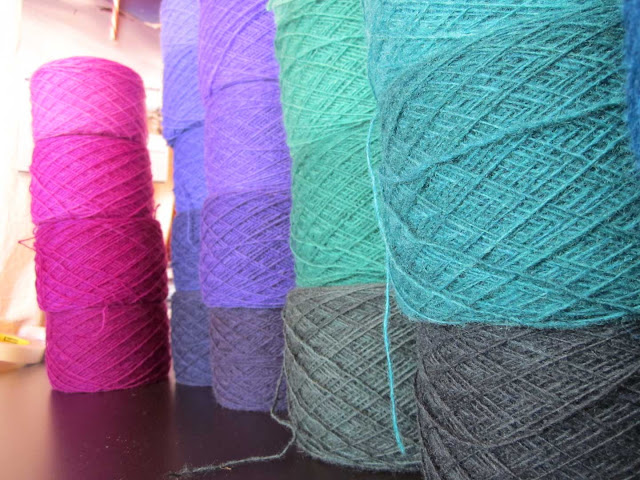 Fright and the hope for community...

How fast the world we assume to be stable can change.  Oh, I'm fine as are all the people I love... but some days help wake me up a little faster than others.

Northern New Mexico, where I live, is in the middle of a natural gas crisis.  As I understand it, there were blackouts in Texas which decreased power to plants that pressurized the natural gas that much of NM uses.  Since there wasn't enough gas, to keep the pressure up in the metro areas of Santa Fe and Albuquerque, they shut the gas off to the small cities at the end of the line.  I live in one of those cities.

I was in a small northern New Mexico village working at the elementary school on Thursday afternoon when the power shut off with a thump.  It was a relief actually because suddenly the heaters were quiet... and I realized the whole building was quieter (partly because all the electric door holders let go and the classroom doors shut).  But when I went into classrooms, the people were calmer.  Kids were working on their assignments or working calmly with each other and it felt like everything had been taken down a notch... for a few hours.

Then news started filtering in about the natural gas emergency and panic started flying through the community.  The tribe had an emergency meeting, parents were coming in droves to pull their kids out of school... people were wondering what on earth they were going to do without electricity or gas when the temperature the night before was -25 and was currently barely above zero.  Many people live in trailers.  It was scary.  The line at the gas station (the only one in town) was 100 cars long--waiting for the power to come back so they could pump some gas and hopefully get to somewhere with heat.  The maintenance crews were turning off water to school housing to avoid busted pipes.  Then the power came back on.  And the heat came back on.  And that switch which had been turned to the "we're a community, we need to help each other out" flipped back to "business as usual".

At home in Velarde, the gas is still out.  The neighborhood is very quiet and I am guessing most people have gone to relatives houses in cities with gas... or are huddled in front of electric heaters (electricity use is up 60%), or if they're lucky they have a woodstove and a good supply of firewood. The gas won't be back until Monday or Tuesday or maybe even later.  The gas company has to go to every single house and turn the gas off, then come back and turn it on again a day or two later.

How fast could our grid be disrupted?  It takes one plant in Texas for communities in New Mexico to freeze to death in the coldest weather we've had in 50 years.  Our power grids are huge.  So are our food grids.

I am one of the lucky ones.  I live on a mesa just outside of town so I have propane.  My propane tank today is still 20% full and the company says they can come and bring me more this week.  I have asked my friends in Taos if they need a warm place to stay or a shower, but they have all fended for themselves quite nicely.  We are a resourceful people I suppose.  Maybe we should use this resourcefulness to figure out how to create better systems--local food systems and local power grids.

I just finished reading Eaarth by Bill McKibben and Animal, Vegetable, Miracle by Barbara Kingsolver.  That might have been obvious from the slant of my thoughts above.  I recommend these books, in fact I think everyone should read them.  They are revolutionary and necessary.  If we don't listen to our planet and learn to live in community, we will not survive as a species.  It is already too late.  We have to create a different world.  Starting now.