Why would you weave a tapestry from the back? 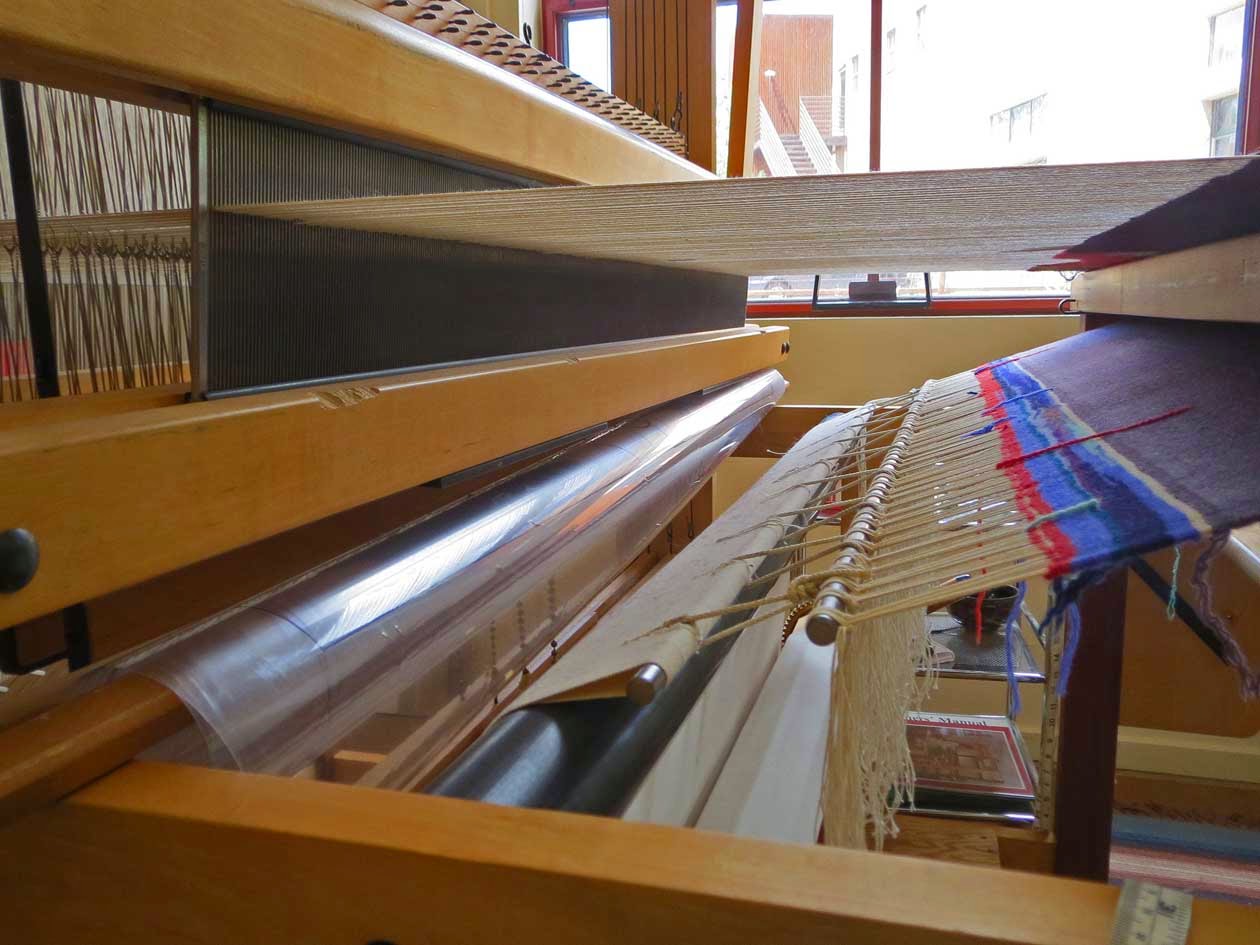 "Really? You weave your tapestries from the back? How do you know what it looks like?"

I get this question a lot when students come to one of my classes for the first time. I try to let them know ahead of time, but many miss the message. I let them weave from the front. I even teach them how to do it. But I continue to make my work woven from the back.

If that isn't bad enough, I also use a low-warp loom. Yes. I weave my tapestries on a horizontal loom with treadles. And it even has a beater. And I use it. I know. Crazy.

For those of you who don't understand, I can only list the reasons why... and then shrug a little and tell you that this is how I learned.

Let me give you a few reasons why you might want to try it.

1.  For the first I'll defer to a true master. When reading Jean Pierre Larochette's new book The Tree of Lives recently (see excerpts in this post), I came across this passage. Given the well-deserved reverence for the name Jean Pierre Larochette in tapestry circles, I feel just a little smug in quoting this from page 317-8 (just in case you have the book and want to make sure I wasn't making this up).


I do not intend to eulogize low-warp weaving. But feeling the urge of a vanishing species -- the low-warp, weaving-from-the-back tapestry weaver -- I have to point out that there is an experience, regardless of the merits of the outcome there is a physical and mental experience that is unique to the practice of weaving from the back. Of course I am thinking about the weaver's experience, but to some extent this is perceived by the viewer, too. It is part of the enchantment and attraction that tapestry exerts on us. Weaving from the back allows for the inclusion of the intuitive, that which transcends the individual effect of any artist, beyond the analytical eye-driven decision making process. The sensorial wholesomeness of the traditional approach has inspired weavers of all ages. As in any art form, weaving is an attempt to capture and communicate an idea. The idea in the artist's mind, always elusive, can be expressed only by approximation, lyrical suggestion. The tapestry expression is best fulfilled when it retains its poetic spirit. In the effort toward visual control the woven image is often dissected to such an extent that, although we may admire its well-crafted quality, that which speaks to our emotions is lost.*

3.  Technique. Several techniques I use frequently are easier from the back. One is a jump-over technique which is just a form of regular hatching. I hate trying to fish those pairs of butterflies out from behind every other sequence and have much more success with their placement and color change from the back. Another is splicing. I love having a clean back to my tapestries. It makes them float in the air, means they can be thin and flat, and sometimes seen from the back. So I like to splice my tails so I can snip off the ends instead of sewing them in, and it is easier to splice with the tails coming toward you. And the one interlock join I use (see this video) leaves a flatter join when woven from the back. Other people use joins like the double weft interlock which also are easier from the back.

4.  When weaving from the front you are in constant contact with the front side of your work which makes it harder to keep it clean over the length of a project. This is probably more of an issue on a low-warp loom where the fabric goes across the breast beam than a high-warp loom.

5.  I get the surprise of seeing a piece I have never seen before when I cut it off. No matter how I think I know what it will look like, I don't. Fun, right?

I suppose the unfortunate majority of you who weave from the front will come back with something like, "but I can see exactly what I'm doing!" And in response to that, I send you back to Jean Pierre. 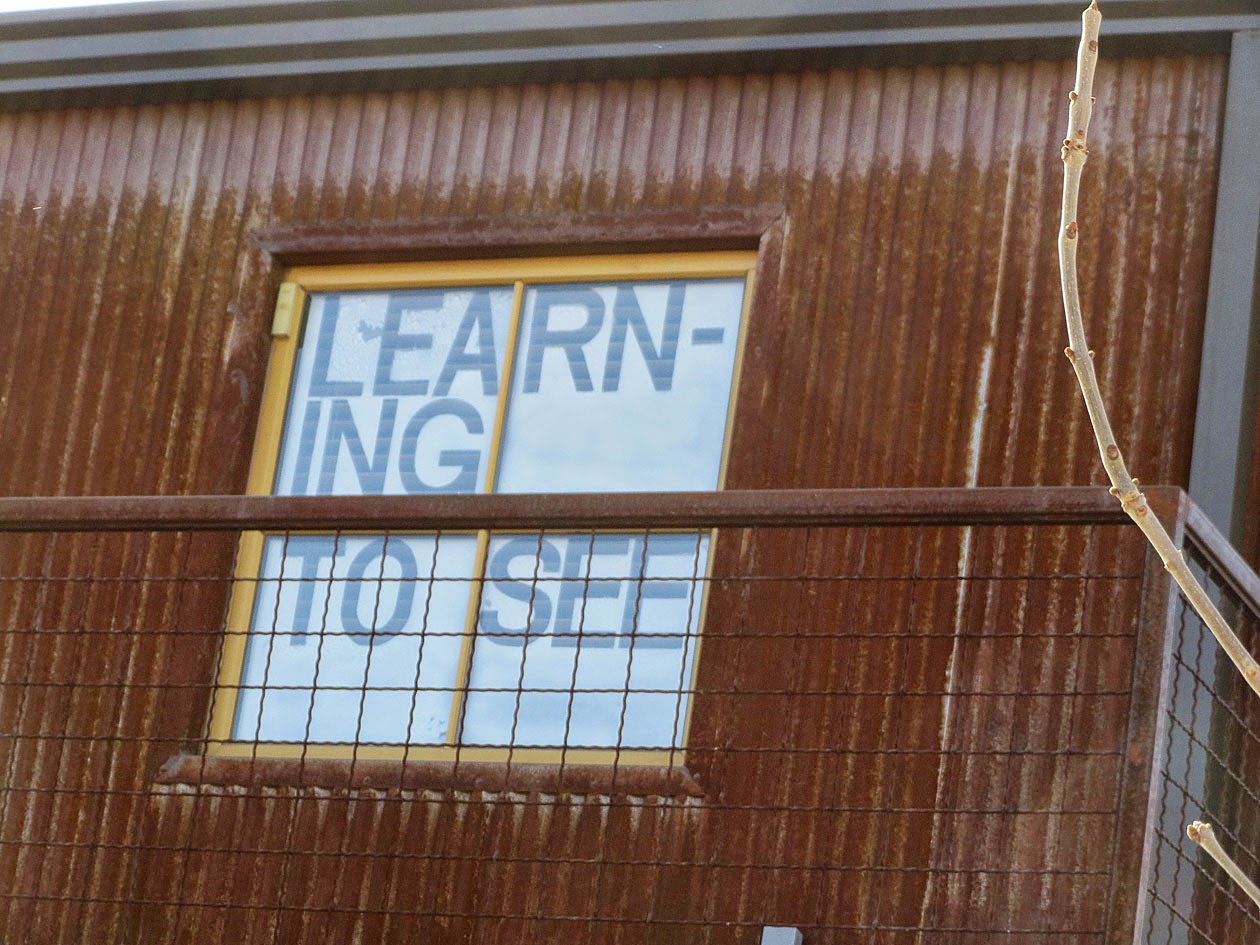 *Larochette, J.P., Lurie, Y (2014). The Tree of Lives: Adventures Between Warp and Weft. Berkeley, CA: Genesis Press.
**What You See is What You Get
Posted by Rebecca Mezoff 4 comments: 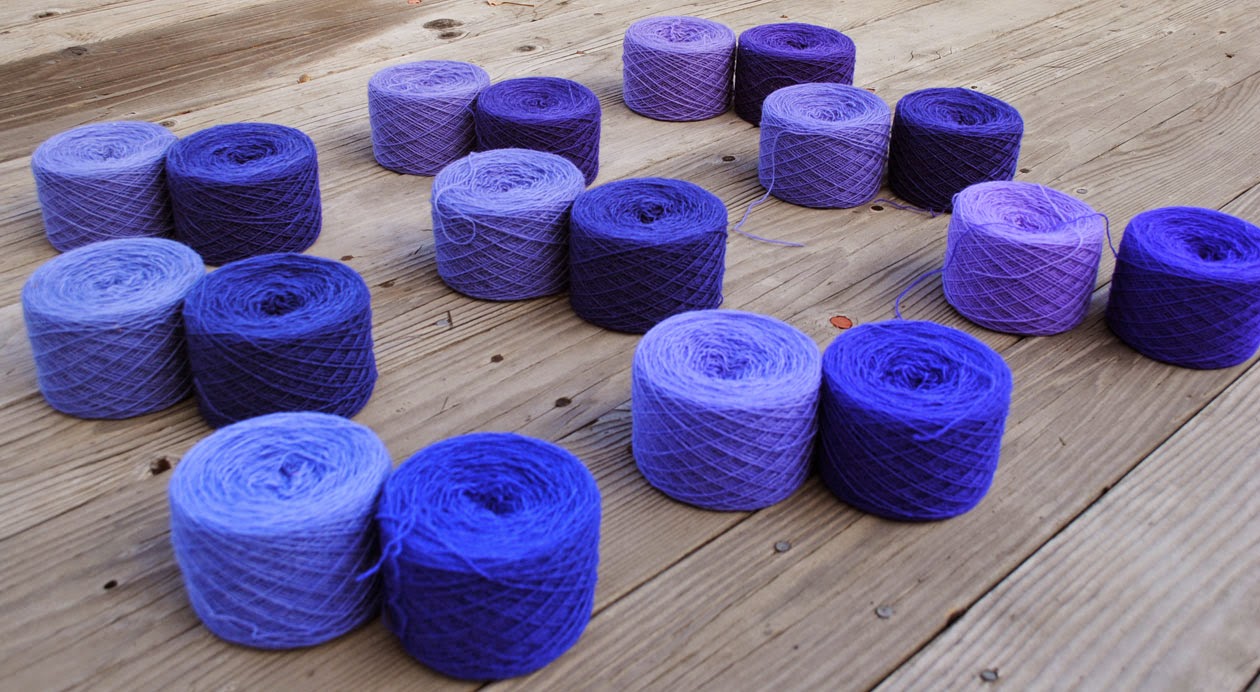 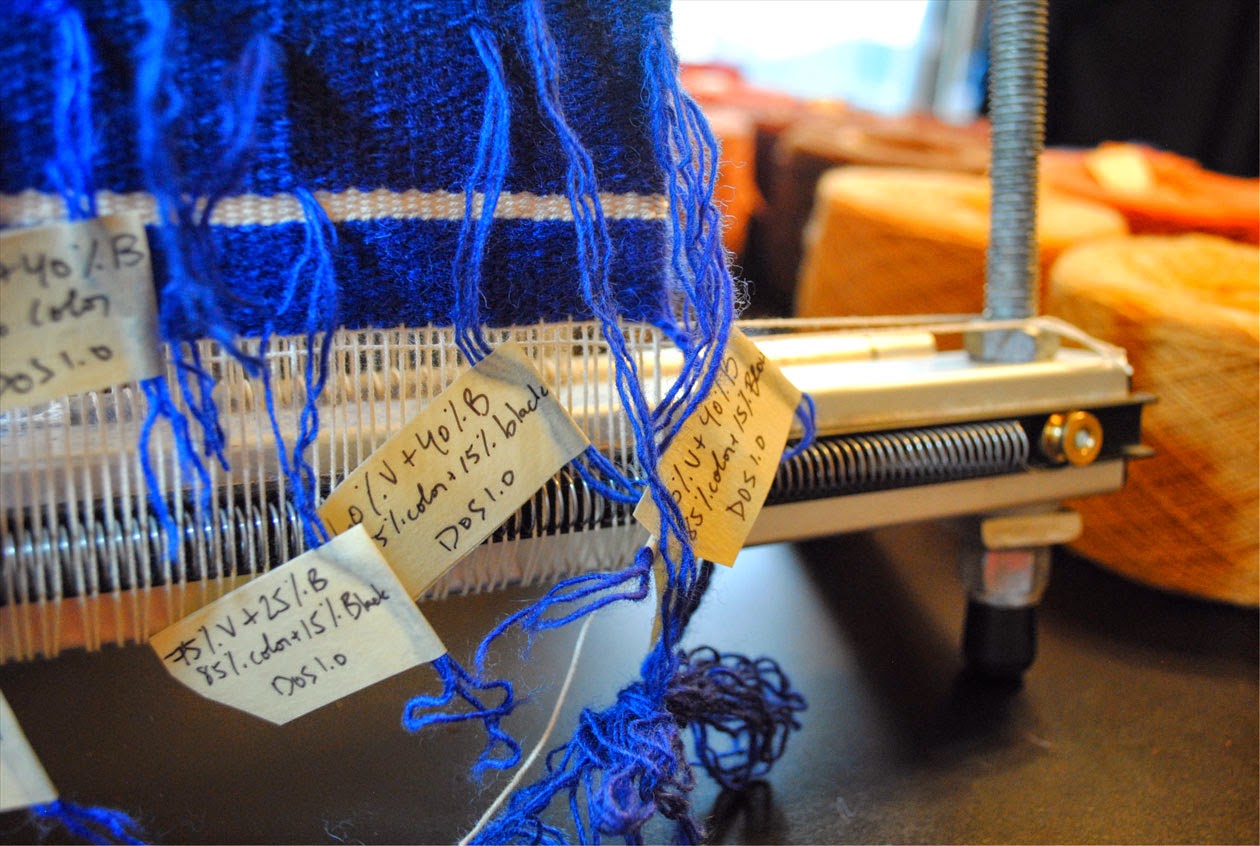 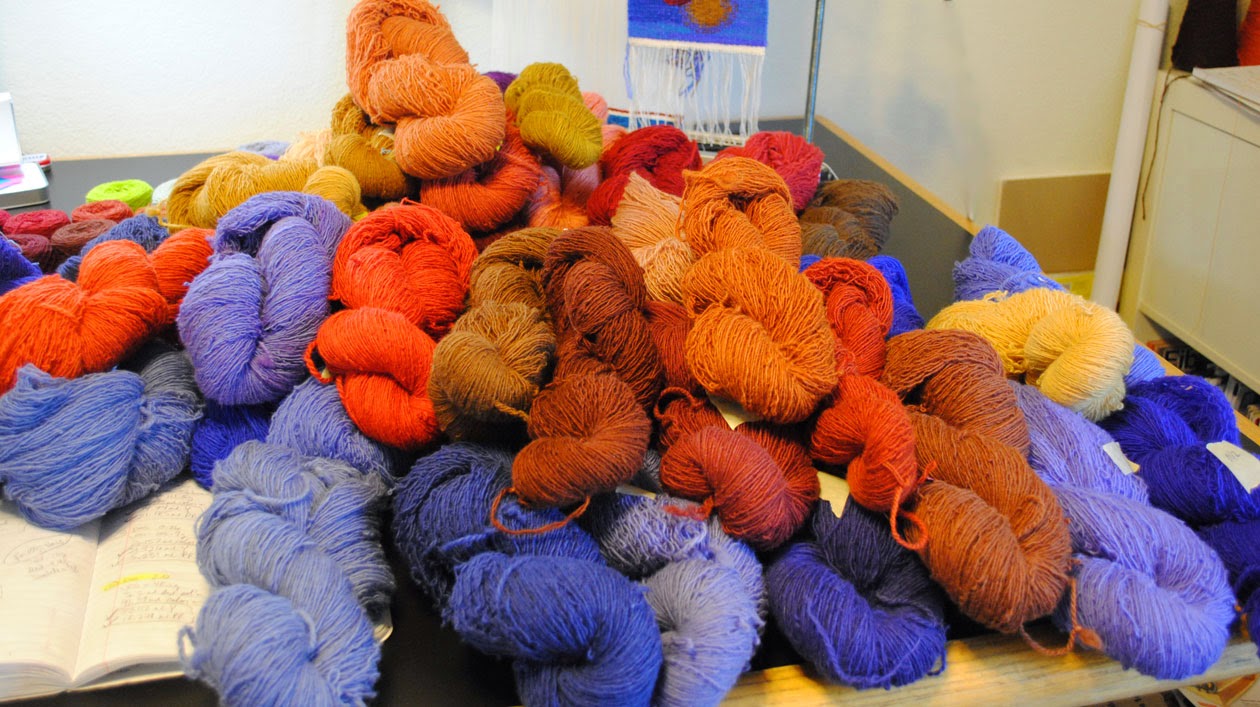 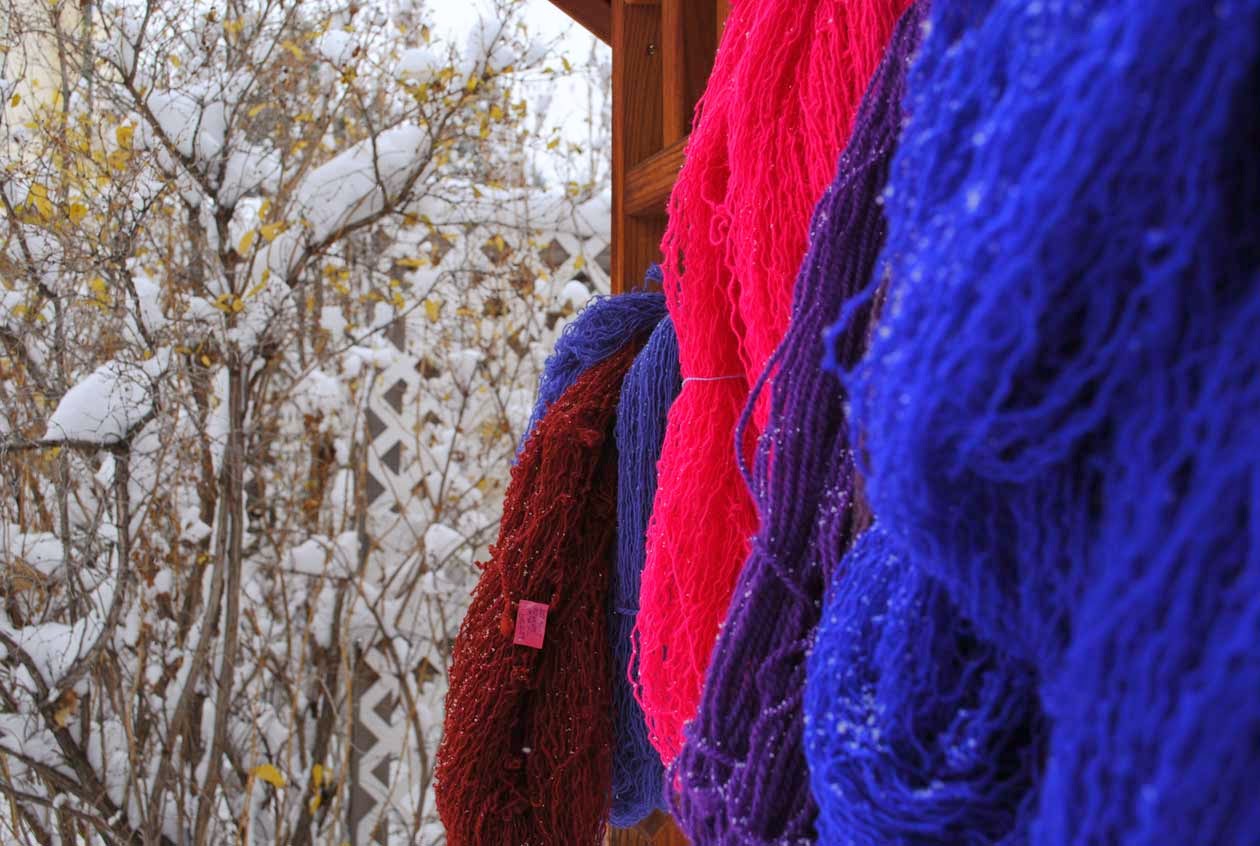 I think I got exactly zero comments on my piece in the American Tapestry Alliance's Untitled/Unjuried show in Rhode Island last summer. Perhaps it puzzled people. Perhaps it wasn't interesting. Or perhaps they just didn't want to ask if the word "lesbian" was really woven into it. 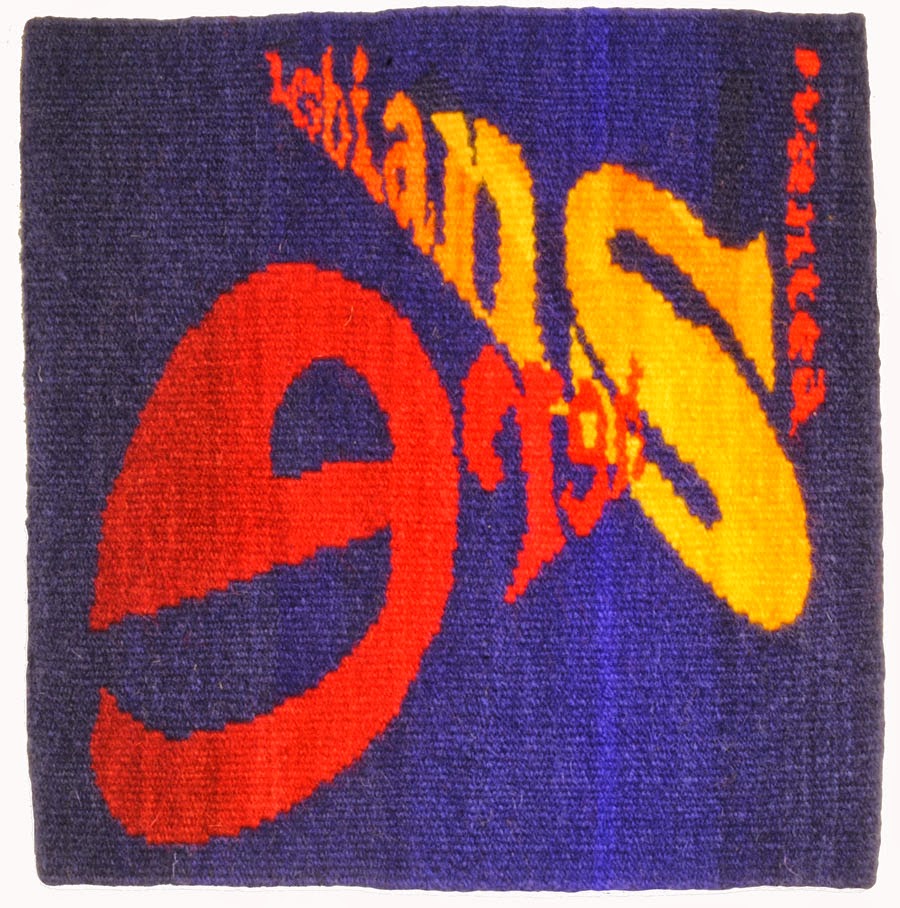 The answer is yes.
The piece is called Personals.
I wove this piece years ago and for whatever reason felt that this was the opportunity to put it in a show.

Posting this piece on my blog is a bit of a risk. It shouldn't be, but it still feels that way. I haven't made the fact that I am married to a woman a secret in this space, but if you really wanted to ignore it, you could. It is a risk because my livelihood rides in large part on people respecting me and what I do. And lets face it. There are many people out there who don't understand people like me.

People like me.
You know. The LGBTQ (sometimes there are more letters added... just go with it) people. Fortunately the world in general has lightened up a bit in the last decade on this "issue". Thank goodness for that. (Frankly, I just hope that we've finally realized there are FAR more important things to spend time debating than the gender of someone's partner.)

This piece was woven quite a few years ago. It was conceived of years before that. Before I met the love that I spend my days with now. Back when I was lonely and wandering through northern New Mexico wishing for connections of some kind somewhere. In one of those lonely swirling moments, a friend I worked with saw me pumping gas at a little station in Taos, pulled up next to me and said (though she is fiercely straight), "Lesbians. Wanted. Here." It was a lovely, sweet, friendly thing to do in a moment I really needed someone to tell me that I was okay.

I scribbled this little design down in my journal a few days later and there it lived until I resurrected it on my first Mirrix.

So there you have it. Lesbians wanted here. It was intended as a question. One design of this piece had a large transparent W at the beginning of the word here, which is, you may have noticed, already backwards.
Where indeed?

Perhaps this was exactly the perfect piece for a show called Untitled/Unjuried. Personally, I'd prefer to be both. 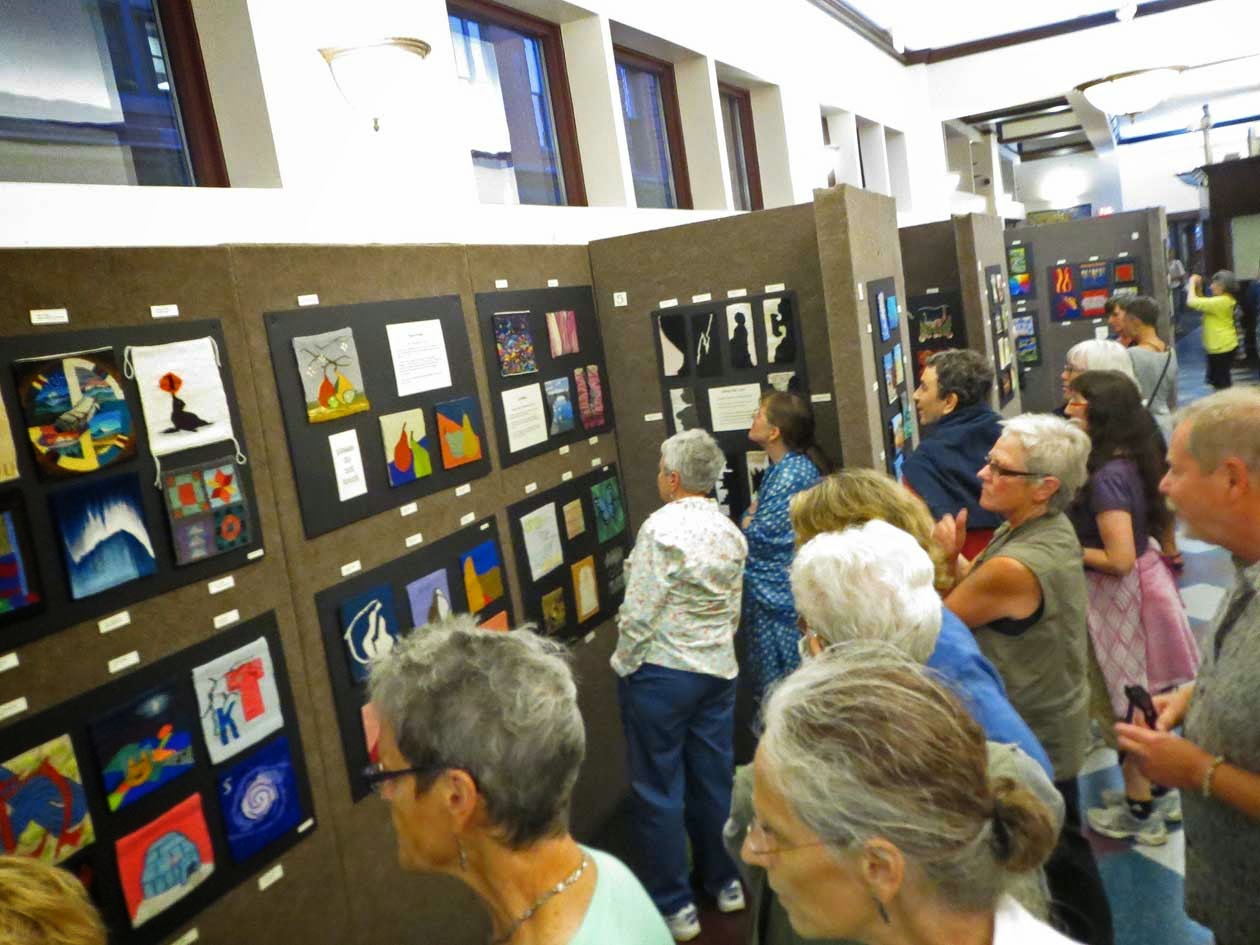 The Untitled/Unjuried American Tapestry Alliance show was lovely. A huge thanks to Janet Austin and her team for putting it together and displaying it at Convergence in Providence last summer. It was a show full of delightful things and I recommend, if you're a catalog collector like me, that you get one for yourself and see what marvelous little things people made for it. I wrote more about it HERE.
Posted by Rebecca Mezoff 14 comments:

Jean Pierre Larochette, Yael Lurie, and The Tree of Lives