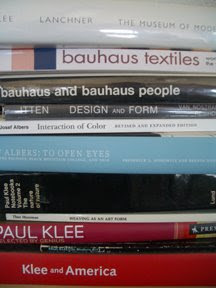 We are planning a show of our work in Germany during the 90th Bauhaus celebration. All three of us will display works hopefully in a gallery in Erfurt--Conni’s home town. Our plans also include a workshop accompanied by lectures designed to connect the Bauhaus ideas with our current work in New Mexico (and Conni’s continuing work in both Germany and New Mexico). We are currently looking for a venue for the show in New Mexico when we return from Germany, probably in the fall of 2009. If we’re lucky we’ll be able to also make a connection at Convergence in 2010 (we’re hoping for Albuquerque!) and perhaps show the work and repeat the workshops a third time. Our next challenge is to secure venues and find some grants to support our travel and teaching.
Posted by Rebecca Mezoff