Fitness and the loom 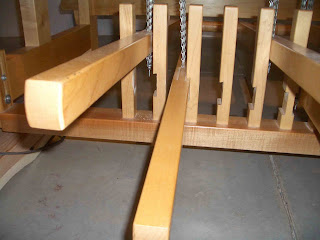 I have woven standing at one sort of loom or another for the last 5 years.  I started tapestry weaving at Northern New Mexico Community College (now Northern New Mexico College) working on Rio Grande standing looms.  Then I made one and wove in my own studio.  Now I am weaving on a Glimakra which has been raised on 2 by 6’s.  The secret to weaving standing up (unless you have a walking loom) is locking treadles.  I highly recommend locking treadles on any loom wider than about 36 inches on which you are going to weave tapestry.  Of course if you are one of those “normal” tapestry weavers who uses an upright loom (where you can actually see the piece you’re working on and sit without hunching over like you’re 90 years old), then you don’t need to heed my suggestion.  Your loom already has “locking treadles” anyway.  I’m hoping I can figure out some way to put locking treadles on the Harrisville rug loom I just acquired.  If you’re a carpenter and need a project, let me know.