This morning I awoke (to a 77.6 pound dog jumping on my legs) at 8am and happily finished my most recent tapestry.  All I had to do was decide on a name, (which isn’t usually difficult but I wasn’t channeling Anni Albers today) but I did eventually come up with something acceptable, make a tag for it (which took 3 tries as I managed to fuse the first two to the towel I was using for an ironing board because BOTH ironing boards in my studio are covered with tapestry yarn), and deliver the tapestry to the gallery.  When I was done with this (and the gallery did seem pleased with 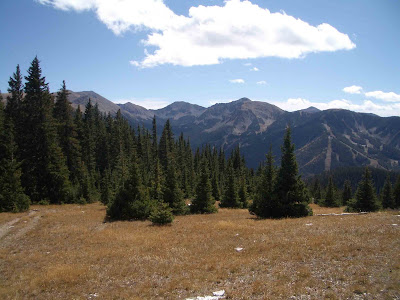 it), I took that 77.6 pound Labrador retriever on a hike from the Taos Ski Valley… Gold Hill is my favorite TSV hike, but be forewarned if you go, every single hike from that valley with the exception of Williams Lake (which, admit it, is for tourists from the flat lands) is straight up.  Whoever built those trails did NOT believe in switchbacks. 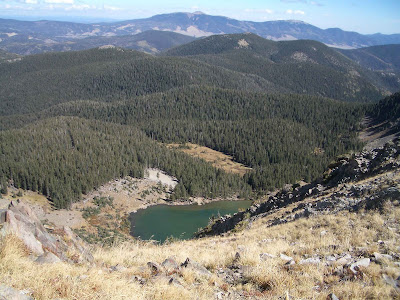 Anyway, the wind was so fierce up there that I had to first dig out the fleece hat I always have in my pack… then realized because of the over-sized craniums that Mezoffs are blessed with (which doesn't really seem to say anything about how smart we are), this particular hat doesn’t really cover my ears very well.  So I was forced to tie the bandana that I had just used for a snot rag over my head.  It was that or be deafened by the wind and probably suffer frostbite to my lovely ear lobes.  The thought of turning back never crossed my mind.  I’m a stubborn hiker babe after all and sometimes sacrifices in the realm of personal hygiene have to be made. But, alas, my nose was still running and so I was forced to practice the farmer nose blow.  I’ve never been able to do this and today was no exception.  I’m afraid my clothing came back smattered with mucus.  (I’ll wash it Mom.)  While at the top where the wind chill must have been hovering around freezing, I found globules of ice in the stone wind shelter.  I’m guessing these are the frozen boogers of the last hiker up there who undoubtedly had to use her snot rag to cover her ears also. 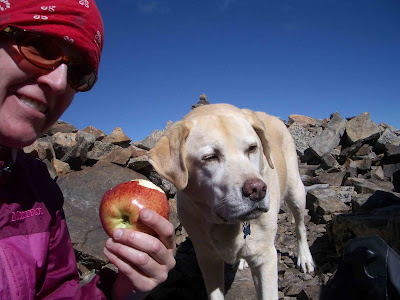 Gold Hill is 12,711 feet high. At the top I tried to send a text message to my girlfriend feeling for all the world like I was on the top of Everest radioing the world that I was still alive.  The wind messed up the signal, and the message, sent back in the Taos Ski Valley parking lot, lost a lot of its zing.  Tomorrow, when I’m back at my loom, my hiking hiney is going to be mighty sore!