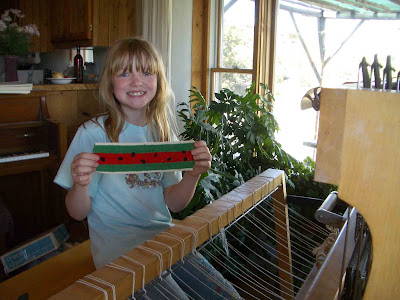 I had a couple days at home with Megan before she had to go back to her home in Mississippi this evening. She wanted to learn to weave on one of my big looms. Since I had a warp on the Macomber I wasn't using, I tied it up for her. I thought it would probably be pretty difficult for her to get her fingers around 10 epi and Harrisville Highland yarn, but she managed quite well!
I pulled out a bin of leftover yarn in various colors and she looked at what was there and announced she was going to weave an interpretation of a watermelon. 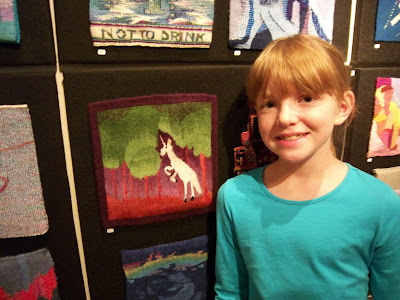 She is 10 years old. This is the result which took her just a few hours. If I can keep her off her horse long enough, she might be the youngest tapestry weaver in the next ATA non-juried show!
This is Megan with the Mystic Moon tapestry she designed at Enchanted Pathways. I wove this piece per her specifications. She is going to be weaving the next one though!
I (and I gasp and feel my heart sink when I write this) have to go back to work in two weeks... that is back to the job that pays the bills, which I like well enough, but summer was only 5 weeks long this year and that just doesn't seem quite right. This year I want to do some weaving projects with my kids (I am an occupational therapist in a small rural public school system serving a native american population). I am considering doing a project in conjunction with Mirrix looms, but even if I don't I will be bringing some various looms to school with me. Megan was my test pilot. True, she is much swifter than many of my kids who are in special education and often come to me with fine motor problems, but with a much wider sett and some fatter yarn, I think they will enjoy the weaving a great deal. I'm not sure how they'll do with the Mirrix and think I may also try a table loom as tapestry may be too complicated. I also have a couple inkle looms which may be useful. Perhaps I will try all three.
Posted by Rebecca Mezoff