In 2004 I returned to New Mexico to learn traditional Rio Grande-style tapestry weaving at Northern New Mexico College in El Rito. I rented a little adobe apartment there and found a job working in the Mesa Vista public school system. It was good. I loved weaving at the college 2-3 days a week. In the spring of 2005 I took the loom building class from Quentin Wilson and made this 2 harness counterbalance walking loom with the assistance of my parents. Dad insisted on precise measurements, and the loom turned out well. 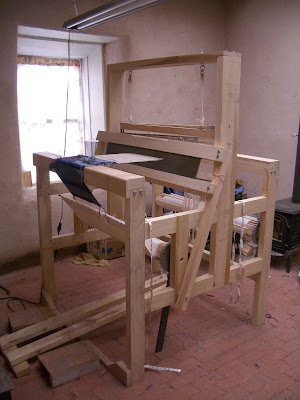 This photo is in my studio in El Rito. It has been a weaving studio for a long time--the building is right on the road and the walls are 5 feet thick adobe. 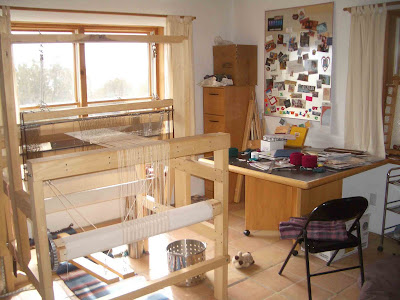 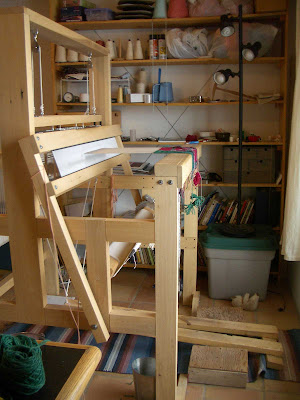 My studio in Velarde before the Harrisville Rug loom found a home here.
Until 2009, I wove all my tapestries on this loom. I love standing to weave as it seems easier on my body at times. However, in 2009 I received a couple looms from my grandparents who were moving to an apartment and I no longer have need of this Rio Grande. So I am selling it. I am 5 feet 10 inches tall, so the loom is taller than many of the walking looms you find in NM. It could, however, be shortened if necessary. Let me know if you're interested! The loom comes apart enough that I could fit it in my Volkswagen Golf, though it is easier if you can leave the large pieces together. It has a 40 inch weaving width and comes with an 8 dent reed. $550 OBO.
Here a few more photos I found in Rebecca's archives... 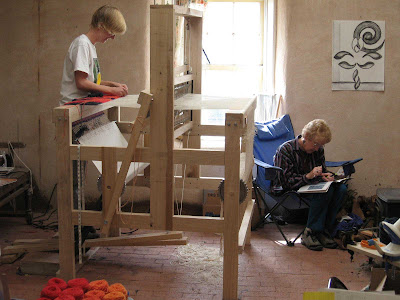 Me weaving in the El Rito studio while my mom reads a magazine by the woodstove. 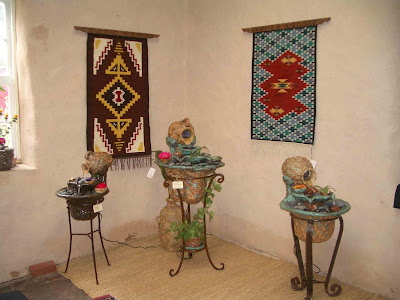 El Rito studio tour, probably 2006. The pottery is by David Coleman. The weavings I did at Northern NM College. 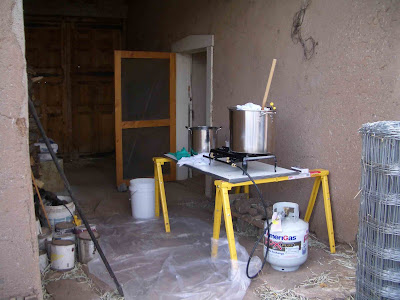 Dye set up at my studio in El Rito.
Posted by Rebecca Mezoff