The city of angels and some great new friends

I have never been to Los Angeles before. This was the weekend. LA might be in a drought, but the air off the ocean is cool and damp for a gal from New Mexico and there are flowers everywhere. Also, food. I had some amazing food. (Grateful and repeated thanks to my amazing hostess and the Seaside Weaver's guild for feeding me so well.)

I had the pleasure of giving a lecture and workshop for the Southern California Handweavers Guild and I must say I had a blast. There were at least 60 people there which was definitely a record for lecture attendance for me. But then LA is a very large place. 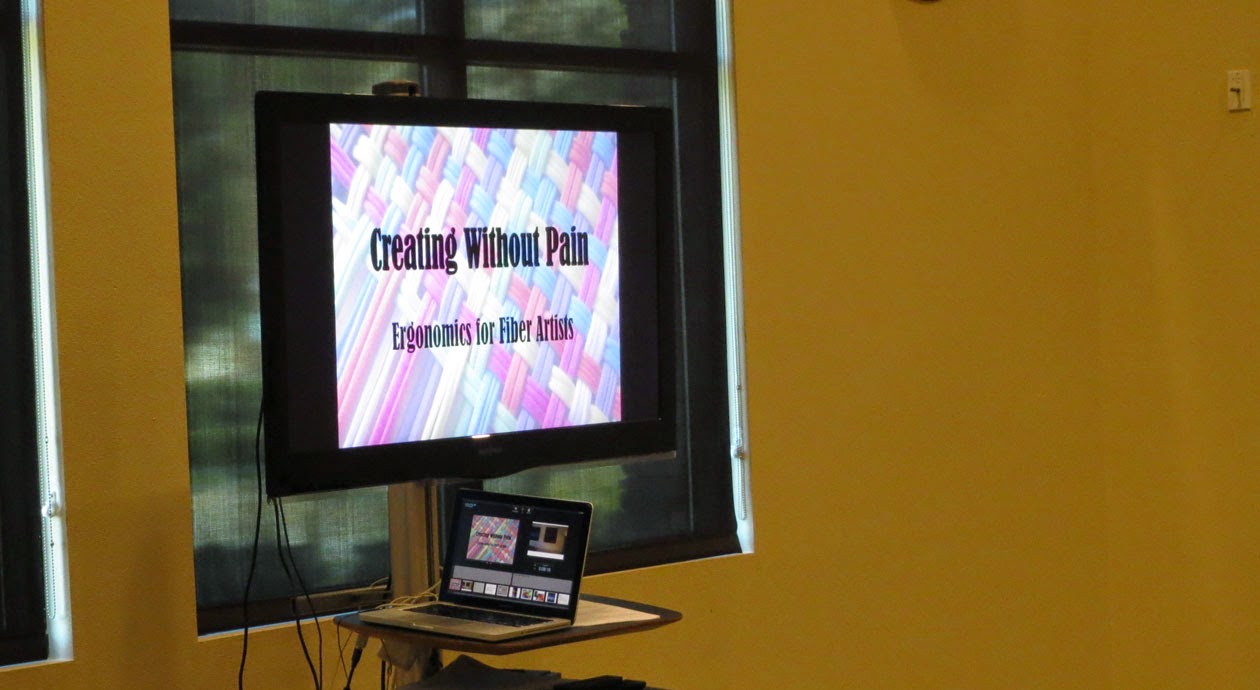 First of all, it is warm here. My hostess lives in Venice Beach and the breeze off the ocean is marvelous (considering it was in the high 90s in the rest of LA and it was snowing in Colorado when I left on Friday).

I did the shortest version of my Color Gradation Techniques for Tapestry class ever--a day and a half. I felt like I was on speed or something... I know I talked too fast and tried to cram too much in. My brain gets all muddled when my tongue goes too fast. But they were nice about it. And the thing is, they made some great things. 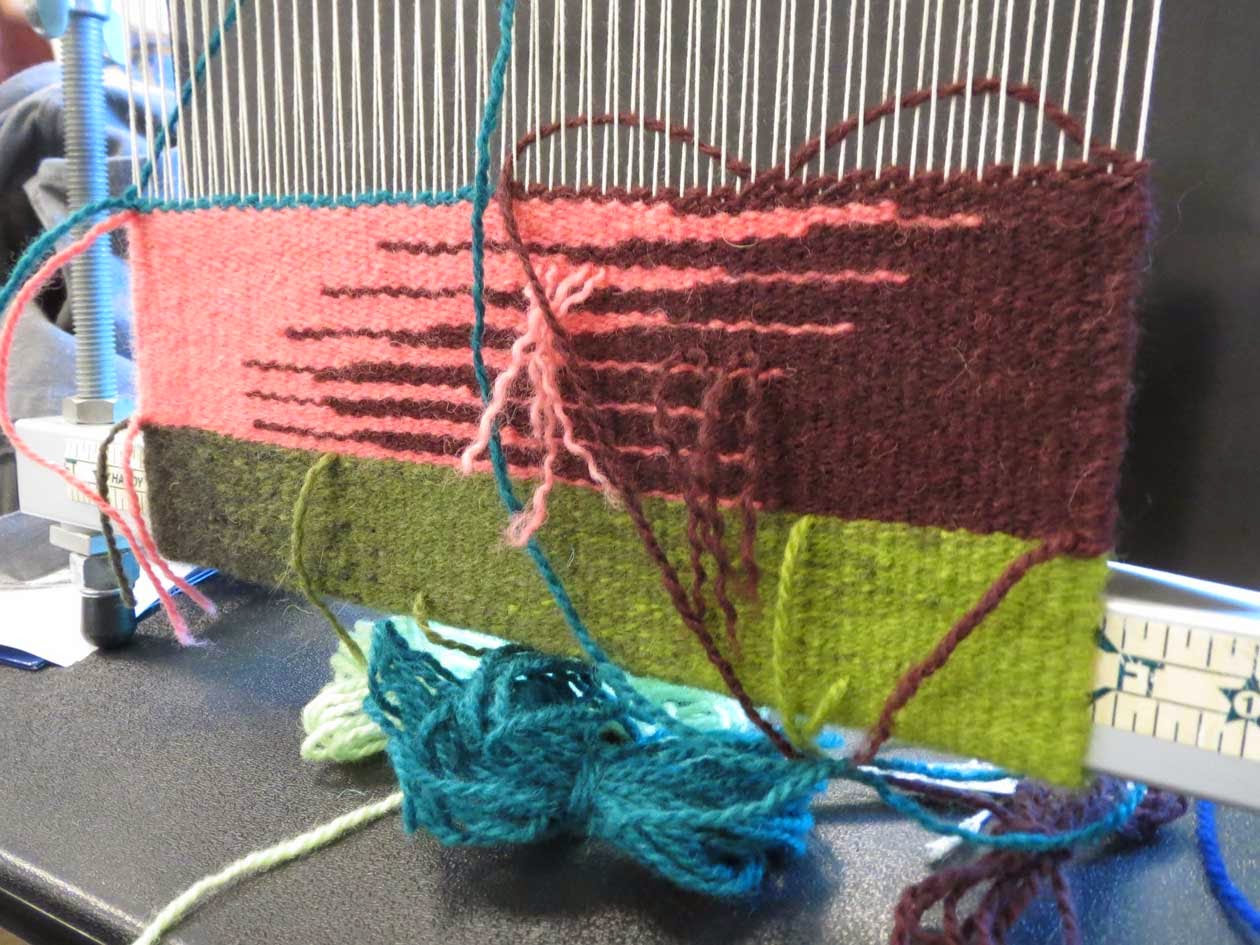 The guild had a bit of a location crisis just before I arrived. They had to leave their old location and they found a fantastic community center in Glendale that had space for them. It was full of Armenian guys playing some version of backgammon with great gusto. However, the classroom was made for about 8 weavers and we had 16 plus me. We crammed everyone in and had to keep lowering the temperature to get the AC to kick on... as you might imagine. 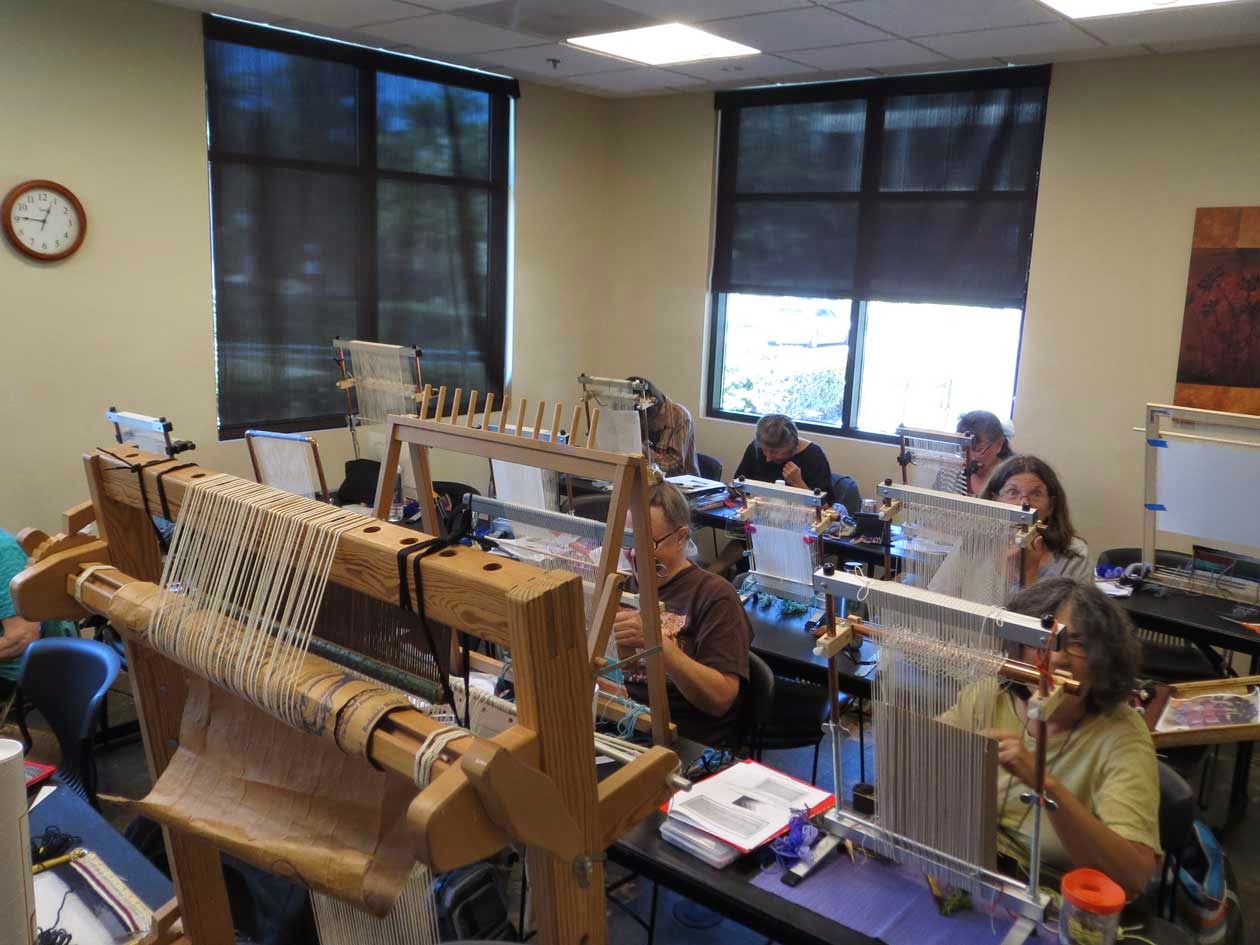 I have started counting how many Mirrix looms show up in my tapestry classes.
Here is the tally so far.
Convergence 2014: 16 out of 25 students were weaving on Mirrix looms
SCHG: 9 out of 16 students were using them (NOT counting me)
I find this amazing. There are so many different kinds of looms out there. That more than half of the looms are made by one company is quite a testament to their useability.

(For those of you who care, the other looms were: copper pipe-3, rigid heddle-1, Glimakra-1,  wooden picture frame loom-1, Hokett loom-1). 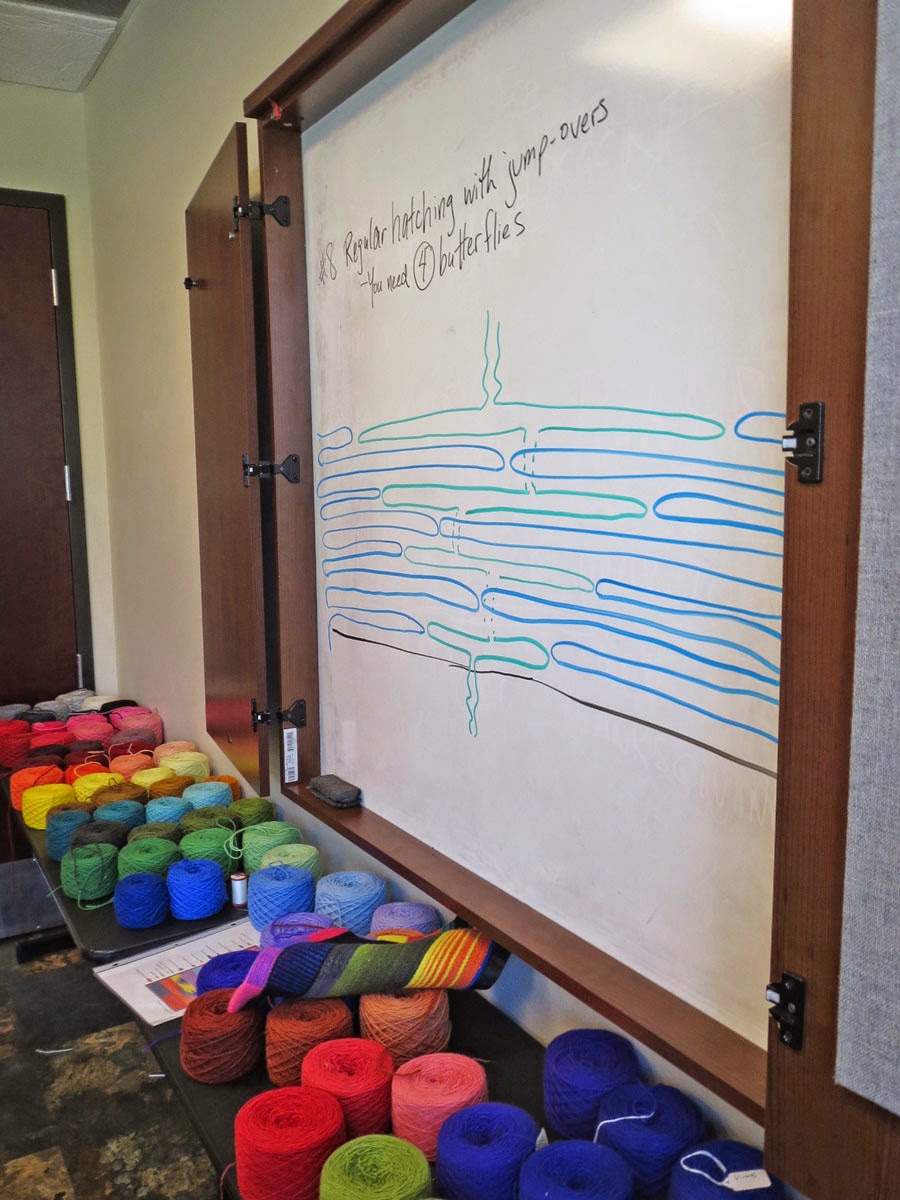 Venice has unheard of things like walk streets. No cars. The street is a sidewalk. The neighbors talk to each other. The cars go in the alleys. Wild and cool. And flowers. They have flowers. 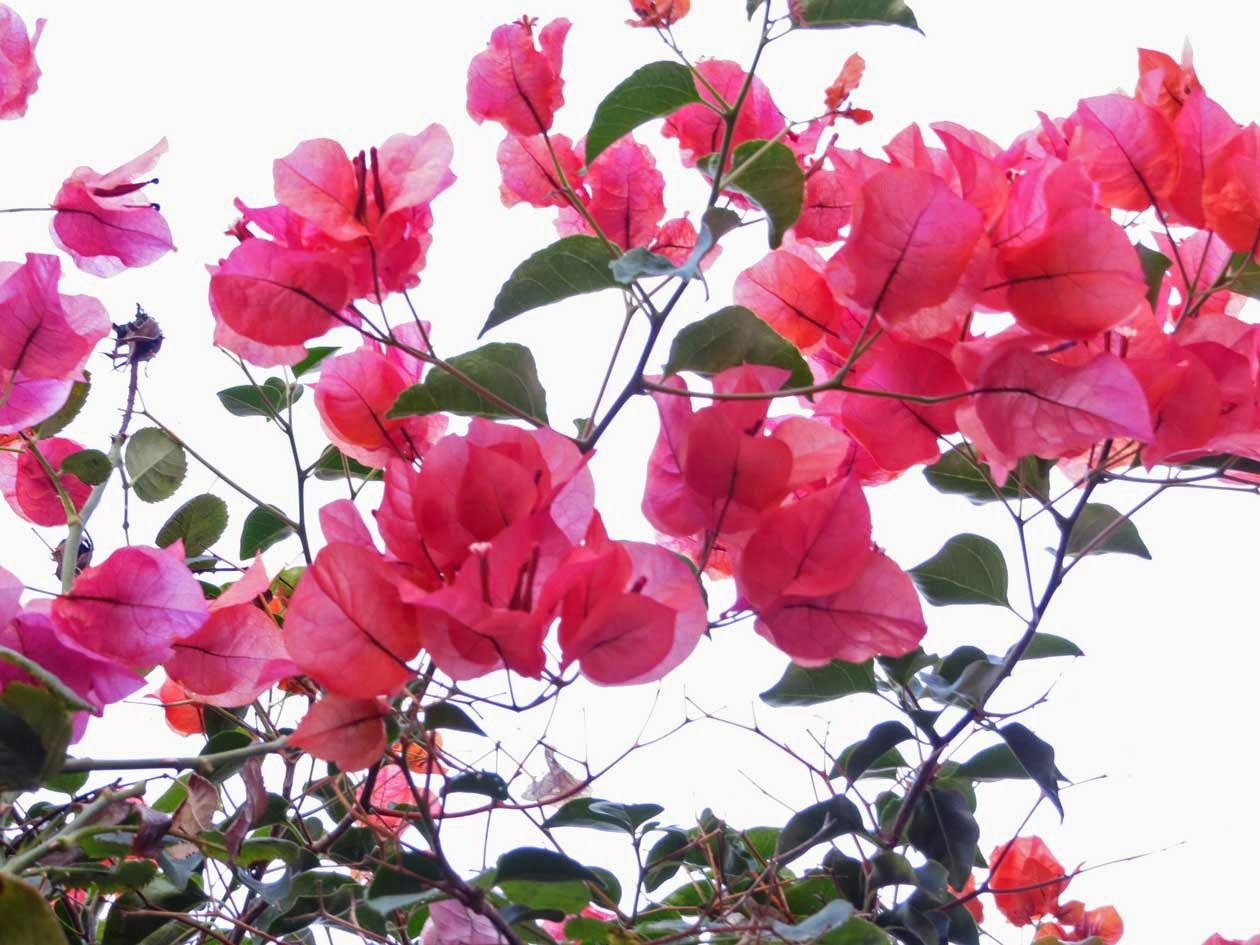 PS.
The new Handwoven is out. Class starts tomorrow! 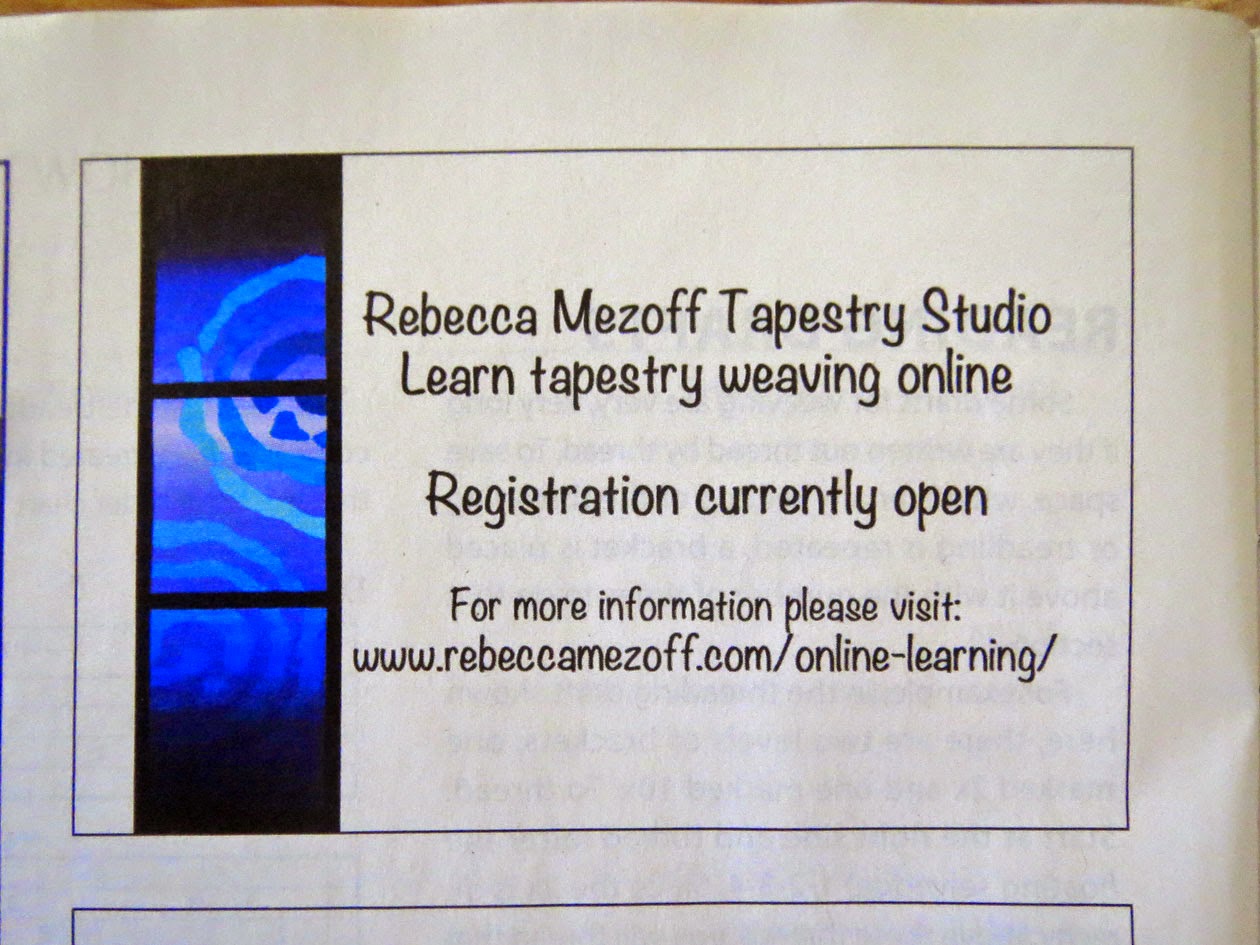