"What IS tapestry these days, anyhow?"

A few months ago I spotted a comment by Sarah Swett on the listserv for the American Tapestry Alliance, ATA-Talk. She had been to an estate sale of a weaver and found an issue of Interweave from 1979 which mentioned a woman named Marian Mezoff. Sarah brought the magazine home and wondered if Marian was related to me. The question Marian asked in the editorial was and is a good one.

Marian Mezoff is indeed my grandmother. She doesn't weave anymore, but I have discussed her past weaving antics on this blog. (And here.) I absolutely believe she was a charter subscriber to Interweave. That is exactly who my grandmother was. In on anything weaving from the beginning.

Interweave was the first magazine. Before Handwoven, long before F+W Media bought Interweave from whoever bought it before them, before there were a thousand daily emails and a hundred magazines... back when Linda Ligon first started the whole shebang. This issue was called Tapestry.

Here is the quote I am interested in in Linda Ligon's editorial (Spring 1979). Linda is talking about the column, Interweave is People, and wanted to talk about "some of the folks who have invested a piece of themselves in what you see before you."


Well, there's charter subscriber Marian Mezoff over in Tulsa who bothered to write a year or so ago and ask, "What is tapestry these days, anyhow?" And when that had simmered long enough to be announced as an issue theme, Nancy Crump, up in Whately, Mass., wrote up to say that she's been developing a lot of ideas about designing for tapestry, and could she share? And Ann Hunt down in Littleton, Colo. called to say she knew this neat lady working in the Gobelin tradition. . . .

What I am interested in is my grandmother's question and also the fact that she asked it. We, as humans, always think that our time is the end time, or the worst time, or the best time, or that our ideas are all new. But clearly in 1979, questions about what tapestry is occurred to my grandmother. She was 56 years old then and about to start her bachelors degree in fiber art. (She graduated when she was 60.)

Aren't we still asking these same questions about tapestry? What is it? Why do we do it?

Archie Brennan is sometimes quoted as saying that tapestry is “an indulgent, elitist, economically farcical and frequently boring, 20th century activity”.* With the humor Archie undoubtedly stated it, I think we can recognize some of the truth in that. Tapestry is slow and many of us use practices that prolong the time even more (spin or dye our own yarn, work at very very small setts, make massive pieces we'll never sell, fill our houses with looms, work high on scaffolding, the list could go on and on). I know of few tapestry weavers who made a living just by selling their work (economically farcical?), and in the history of tapestry, it is clear that the art form was elitist... largely because only the rich could afford to pay someone to make such a labor-intensive work of art to hang on a castle wall.

For me, it all comes down to this. I can't NOT do tapestry. I suspect the answer, for those of us who choose to spend our days making and teaching tapestry, is the same. It is what we do because we love it and we can't imagine using another art form.

My grandmother had some strong opinions about what art is and is not. That definition undoubtedly changes with the times. Many of us who weave traditionally-based tapestry have questioned the new craze among weavers using frame tapestry looms, many of whom are young. It is easy to criticize the lack of skill (perceived) and the belief that seems prevalent that they invented this mode of expression. (If you are interested in seeing some of these weavings, look on Instagram under the hashtag #weaving or #weaversofinstagram.)

But it isn't new. There is nothing new under the sun. Tapestry has been around as long as people have been weaving which is a long damn time. Does it really matter that we follow certain rules? That we subscribe to a certain school ("I weave in the Aubusson tradition." "I use bobbins and weave up in shapes"). Tradition is likely important, but so is encouraging new interest in a very old art form.

How can we do that the best? How can a group of tapestry weavers who has been around for decades making gorgeous things, showing them in the same shows, loving each other's work, selling it for far too little, and teaching when we can, encourage a crop of newly interested weavers who want to make textiles that hang decoratively on the wall?

What is tapestry these days, anyhow? 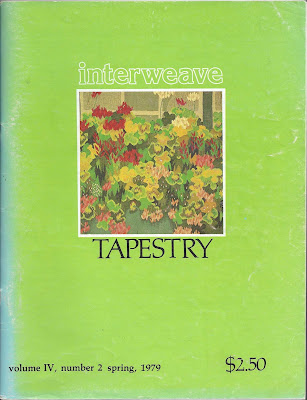 It is a good question grandma. I don't know that there is ever going to be one answer. I think we have to embrace all of it, make what we need to make, teach what we know, and enjoy learning from each other. Is that too inclusive? Do we need to create a dichotomy where contemporary tapestry is a revered art form which came from certain European traditions (and I argue that that in itself is not the case) and push to have it auctioned at Sotheby's and shown more frequently at MOMA? I guess I don't know and each of us will have our own opinion on the matter. Those of us who make a living in tapestry certainly do want it to sell, and perhaps selling is linked closely to the image of the art form in the public eye. But I don't think we can push the professional image at the expense of the craft, if only for the sake of the new learners.

Perhaps some of an answer comes later in that issue of Interweave in an article called,  An Approach to Tapestry, by Laya Brostoff.**


Tapestry art serves a greater purpose than mere reproduction, whether abstracted or representational. It helps us understand ourselves and our place in the world. Each of us experiences reality in a different way and our realization of it, our weaving of it, in a tangible form, will also differ. No one style is right for everyone and new styles and their variations and mixtures with old ones will continue to act as avenues for new expressions woven in new ways....

Most contemporary tapestry practice is done by weavers who are also the designer of the work. That means that a tapestry weaver needs a huge skill set from the initial design idea through creating the actual design to being able to manage all the techniques needed to successfully render a design in tapestry. I won't even get into marketing the finished work!

Some people don't have or don't want all those skills. I maintain (don't shoot me!) that learning tapestry weaving as a craft and a hobby is absolutely valid and that most people who weave tapestry are not interested in having their work shown at the Tate. And that is okay. The difficult thing is how we talk about it. If professional tapestry artists talk about tapestry in reverential tones, it is not going to be attractive to new weavers. Why not knit instead? The knitters have their culture nailed. Knitters are everywhere.

I think tapestry has the ability to push people to learn about design and color and form. And it is just challenging enough to push the learner to expand themselves. And in that way it is a good thing for a hobbyist to pursue. My question is, can we as professional tapestry weavers embrace those newly interested and especially those who do not want to be professionals? Can we share the word tapestry with them and love their experiments and learning? I think we have to. At least it'll be a happier world if we do.

Thanks for asking the good questions grandma. I love you! 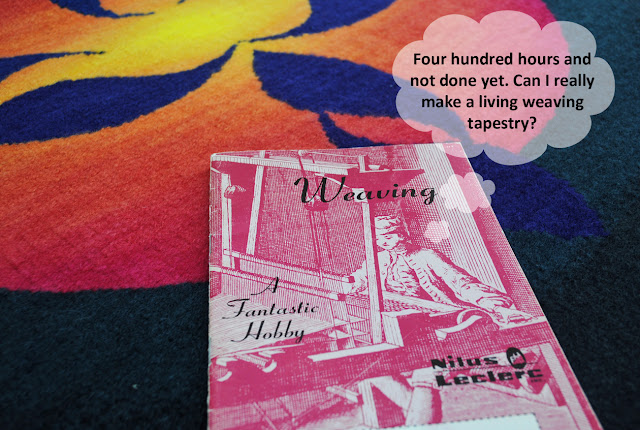 *I have heard Archie quoted thus before, but have never heard it straight from his mouth or found a written source. This particular quote came from an interview with Sarah Swett on Syne Mitchell's Weavecast.
UPDATE: Exact quote from Archie Brennan in the World Tapestry Today catalog in his artist statement is: "I work in a minor art form. Tapestry is an indulgent, elitist, economically farcical, and frequently boring 20th century activity." I bet this is the Archie statement that is most often repeated. The catalog is from 1988.
**Brostoff, Laya. "An Approach to Tapestry." Interweave Spring 1979: 27-35. Print.
Posted by Rebecca Mezoff