Brother-in-law to the rescue 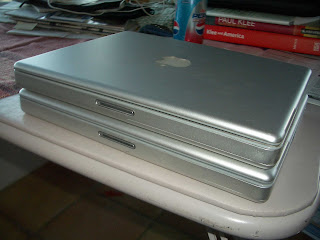 I posted awhile back about the death of my trusted Mac Powerbook G4.  I had pretty much given up getting the data back, and stoically refused to think about the loss of all those little bits and bites of data I generated over several years that were gone in a puff of electronic whimsey.  BUT I have an absolutely amazing brother-in-law who despite my frequent abuse of his incredible brain power, continues to help me out with fixing just about anything that could possibly be fixed (and I believe he lives by the mantra that anything can be fixed somehow).  Seriously, this man can make anything run again.  For goodness sake, he replaced the head g 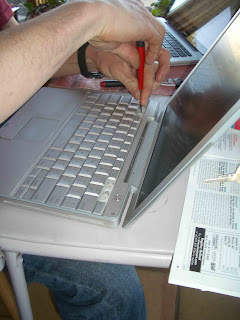 asket on my sister's aging Ford Escort (incongruously named Red even though it is bright blue in color) TWICE!  He can fix everything from cars to washing machines to plumbing.  So it wasn't too far off to think maybe he could fix my defunct computer.  He volunteered to give it a go, really he did.  The thing is, it looks like he actually might recover that data for me.  Now it is clear that I worshiped the ground he walked on before this feat, but if he actually hands me a DVD with the contents of my hard drive on it, he will have earned a place in my pantheon of worshiped beings--or at least a whole truckload of bribery beer.  Here are the photos of the gutting of my Powerbook.  I couldn't look.  We started by nesting my computer with my sister's identical computer in the hopes that some sort of electronic synthesis would take place and jump start the ailing computer.  No dice. 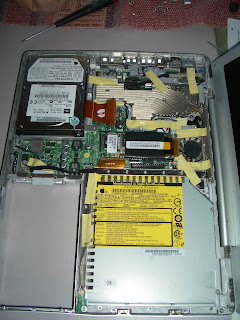 So Luke started doing what he does best--he took the whole thing apart.  And there is my hard drive.  Turns out there was probably some electronic glitch in the thing and he actually did get it to spin again... lets hope it spins again long enough to transfer my photos to a DVD. 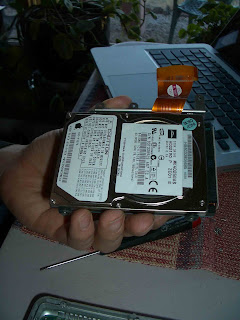