I have been home from Germany for over a month now, but somehow I still feel like the pendulum hasn't swing back to the center yet (Ever read The Pit and the Pendulum by Edgar Allen Poe? He was one of my favorites as a kid--my Dad had a scary story-telling voice. And no, I'm not exactly saying that my job is like the Inquisition). Perhaps it never really stops swinging though. Of course finishing a 3-year project and pulling together two major shows was a lot of work. I forget this. I forget that recovery time is needed and that it is okay to relax... to review the photos, write the articles, come out of the foggy glow left by a fantastic European trip... and hopefully come back to the loom again and start to weave. 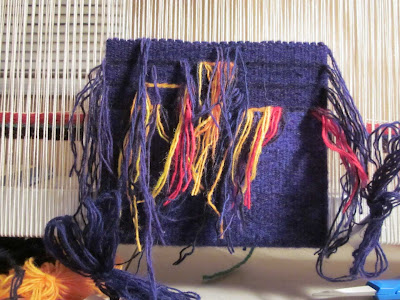 I started a small piece on my Mirrix last week and ended up tearing out a bunch of it. This is called frogging when you're knitting, but unlike knitting, the weaving has to be undone one pick at a time. When you're tearing out a pretty fair isle sock, you just rip. Anyway, the weaving had to be ripped back since the colors weren't working. Maybe I should just be glad I have learned enough to know when the colors aren't working while I'm still weaving it! (photo is before ripping... we'll see what the new colors look like this week)
Anyway, un-weaving seemed to go with my general struggle the past month. I was reading an excellent memoir by No Way Ray Echols titled A Thru-Hiker's Heart (about his hike of the Pacific Crest Trail from Mexico to Canada)... I tend to read hiking books when I am feeling a little bogged down. At the end of the book he talks about his return to his "regular" life. He says, "...There is an undercurrent, like a sub-sonic speaker, creating an indefinable itch, a tension in the neck and shoulders. It's fear... and anger. I am afraid that I will not be able to hold on to what I've found these solitary months along the trail. That I will, all too soon, be once again trapped by the non-essential, embroiled in the unimportant, snared by responsibilities of living in a world where others must be taken into account. I fear that in the coming weeks it will all be come fuzzed and gossamer. I will become more and more entangled, like a freeway driver in rush hour traffic, until all that seems real is the shouting and the honking, the grimacing and the groaning...."
I am afraid that I will forget the experiences of the summer and fall--of being part of two fantastic shows, of completing a long project, of forgetting what I have learned before I really understand what that was. Hiking, especially long-distance hiking, is an activity that quiets your brain and makes you realize how simple life can be in any given moment. It is hard to hear the quiet when squirming under an unmanageable job, too much driving, and the call of so-many-things-that-have-to-be-done. So I am starting at the only place I can start. I am asking the important questions: "What are those things that I think really have to be done?", "Is that really true?", "What things do I not have to do?", and "Where can I get gluten free cinnamon rolls?" 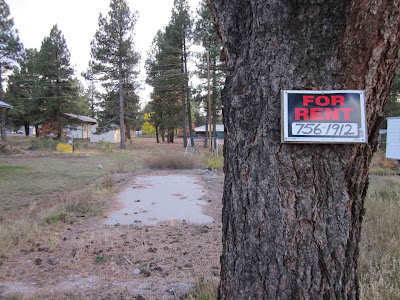 Some pictures from Chama, NM where I stay during the week. Ostensibly the For Rent sign used to have a trailer behind it, but they have been pulling trailers out of this subdivision this fall--the one next to mine and one on the next street just in the last few weeks. I hope they don't take mine while I'm at home some weekend. My Mirrix is in there. 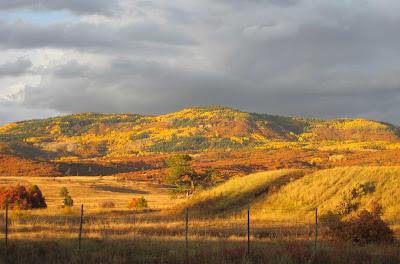 The colors are beautiful... and since this photo was taken a few days ago, most likely covered with snow now.
Posted by Rebecca Mezoff