Helena Hernmarck, In Our Nature

I have tended to call the work I do 'Decorative Art,' with a European understanding of that term. My feeling is that there is still room for this art form which is developed to fill a need and has some clear limitations within which the most suitable solution is found.
--Helena Hernmarck

I had the opportunity to take a tapestry workshop from Helena Hernmarck at the American Swedish Institute in late July. To attend this workshop, we had to apply and be accepted by Helena. She let me in despite my picky-flat-tapestry-weaving ways. I think she even called what I do Gobelin tapestry! (I thought no such thing, but also have have never been to France.)

The class was given in conjunction with a large exhibition of her work, In Our Nature. The show was phenomenal. If you live anywhere near Minneapolis, please go to see it before October 14th, 2012. There are four large tapestries there borrowed from museums which we were not allowed to photograph. Seeing only those four would be worth the trip from just about anywhere in the USA or Canada. But in addition to that there are many more tapestries displayed throughout the ASI facility. The museum pieces include Poppies, 1978 and Bluebonnets, 1979.

Here are some pieces from the show. Folk Costume Details is owned by ASI and you can go and see it any time in their beautiful new building.
ASI still had the large "sample" Helena had woven for Folk Costume Details and I caught them holding it under the finished tapestry. The tapestry was reversed from the sample in the final weaving. Notice the person on the balcony above for scale in the photo below. 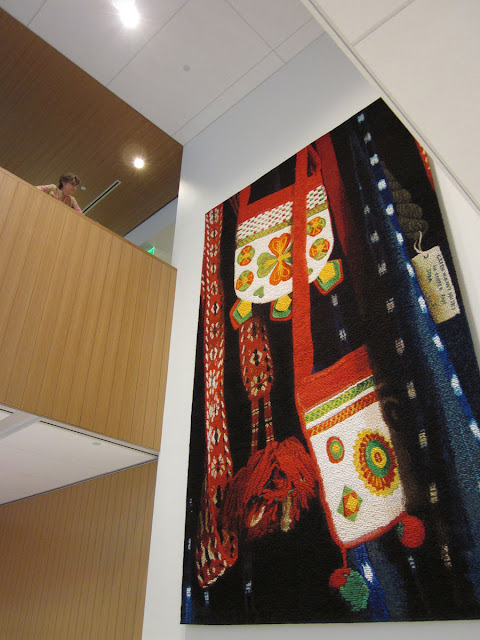 Folk Costume Details is monumental (woven in 2006 at Alice Lund Textilier, it is 15' 4" x 9' 7"). Note the detail of the tag below. Under that that is a photograph of the assemblage of items similar to that which she took the photograph that the tapestry was woven from. Helena works from photographs and goes to great lengths to get the photo right before translating it to a cartoon. Sometimes she uses photographs others have taken including professional photographers, sometimes she takes the shots herself. 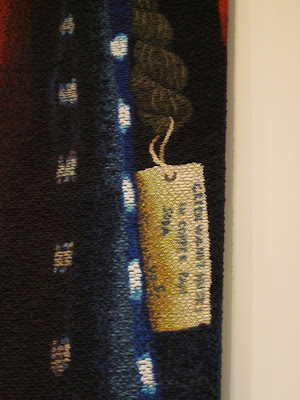 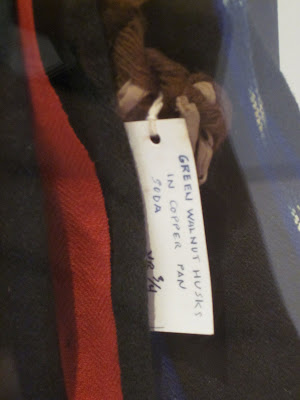 Part of the realism of Helena's tapestries is created in the viewer's brain. This concept has always fascinated me. From a viewing distance, the face of the woman sitting on the bench is detailed. But look at the detail shot below.

The actual detail in the weaving is not there, but we see a woven face when we look at the tapestry from farther away. 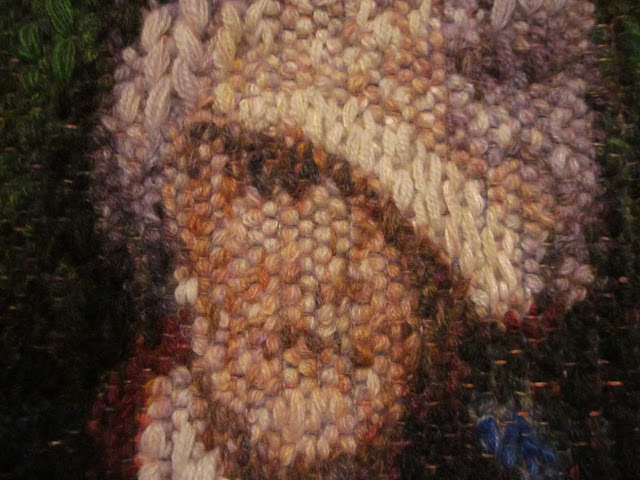 The class spent a lot of time looking at the tapestries in the show. We had the distinct advantage of being able to try the weaving technique, go upstairs to look at examples of Helena's use of the technique, and have the master herself there to answer all our questions for three whole days. 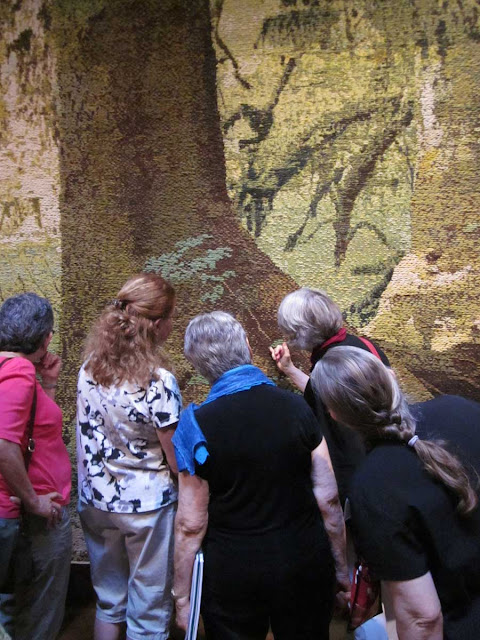 I love this piece. I think what I love the most about it is that Helena went to great lengths to weave this envelope exactly as she received it in the mail including faulty typewriter H's and dirty smudges.


Detail of the stamps which are beautiful and probably 24 inches high. (?)  Unfortunately I was busy admiring another piece and missed her explanation of how she did these stamps. I think there was a warp spacing change, but I am not sure. 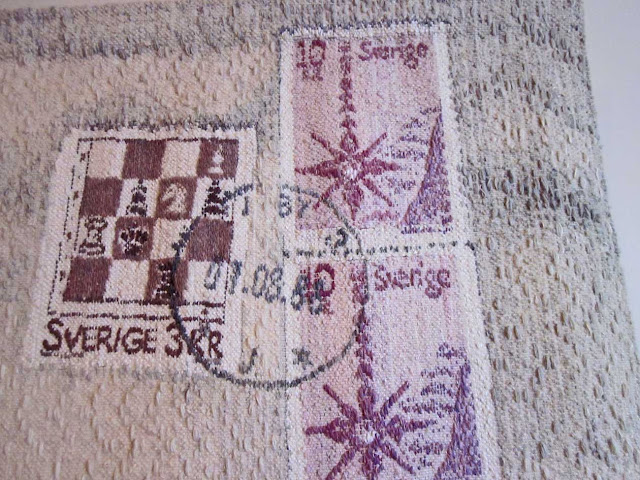 The depth in this tulip piece is amazing. Helena is a master of making parts of her images look farther away, and one way she does this is making part of the image fuzzy or out of focus. Seven Tulips is a good example of this. 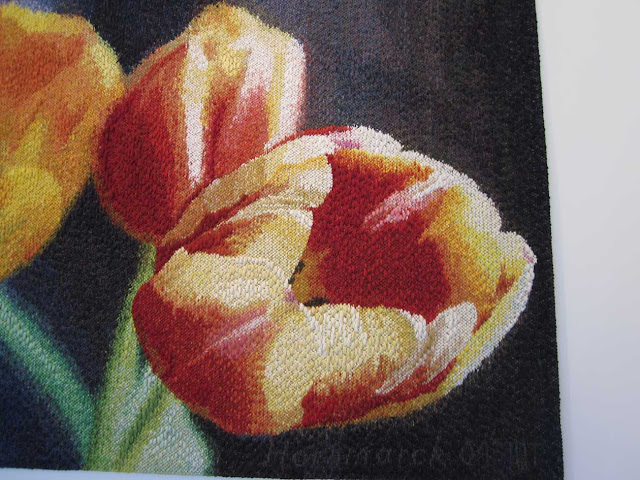 Helena gave us all kinds of details about the process she uses in her work. I could have talked to her forever. She is energetic, engaged, and completely fascinating. 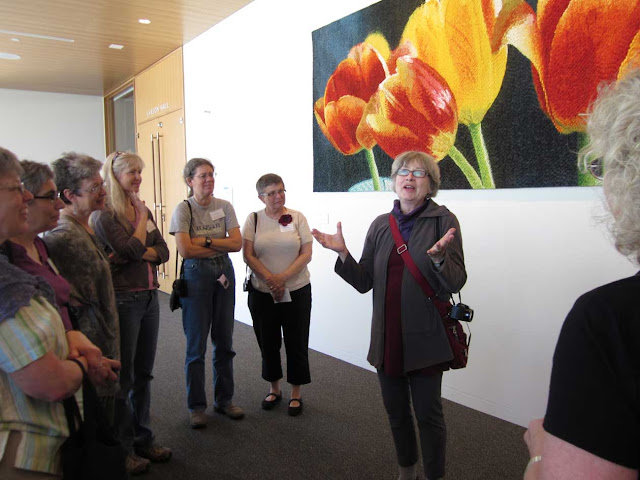 I kept coming back to look at this piece, Poppyfield. The sense of depth was uncanny, but from up close it just looks like little blips of color. Even with a photo, if you squint you feel like you are falling into the weaving.

The opportunity to study and even touch these wonderful tapestries was incredibly valuable. (Okay, the only one I actually got to touch was the sample from Folk Costume Details, but still, it was quite a rush.) 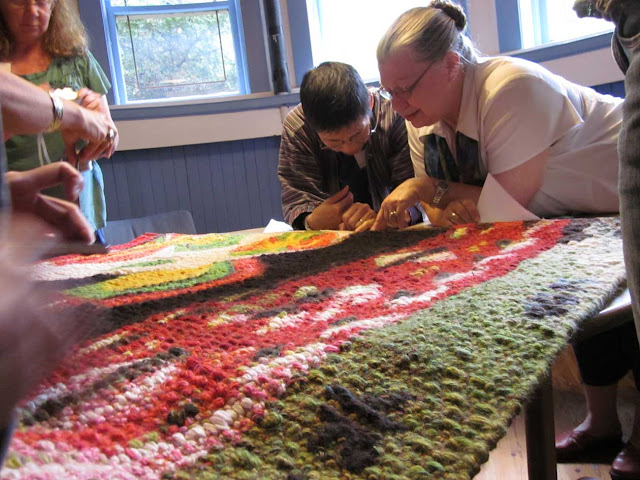 Here are a couple details of the weaving itself. Helena's technique involves two tabby shots, some linen stabilizing shots, and a pattern shot which creates the floats and lends depth and texture to the work. She uses colored warp which does show. The colored bits give the pieces a certain spark and aliveness. Helena's signature creation of depth is created by a combination of all these elements plus her ability to translate photos into colored yarn. 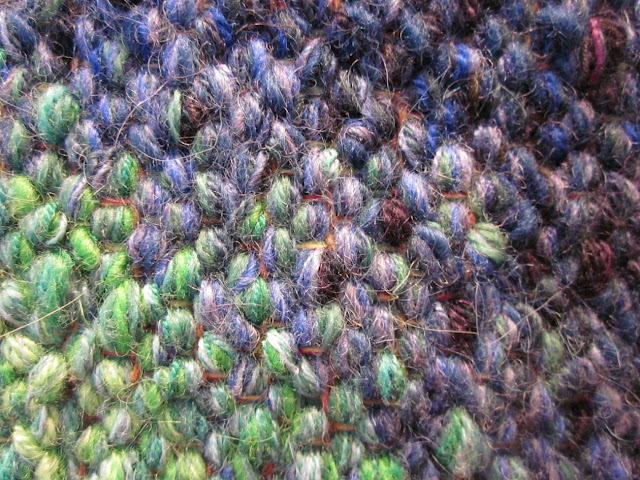 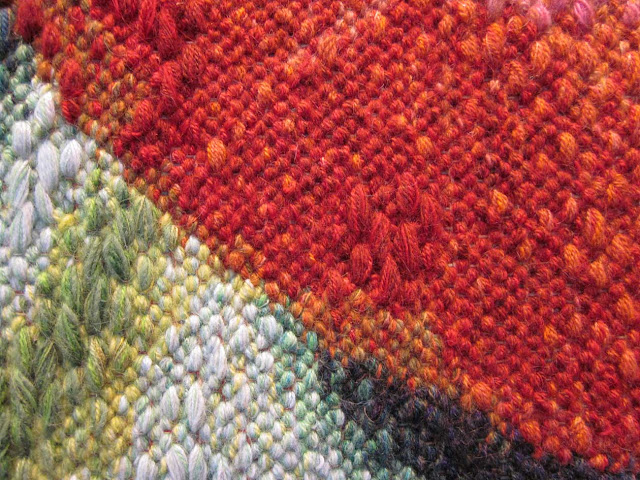 Most of Helena's large format tapestries are now woven at Alice Lund Textilier in Sweden. We were fortunate that the owner of Alice Lund, Frida Lindberg gave a presentation on Saturday evening complete with photos and history of the workshop. She has a blog which she has just started publishing in English (yeah!). This post about the weekend includes a photo of my sampler, the last photo in the post. Here is a small photo of Frida (center) and to her right, Tamako Takahashi, one of the weavers who worked on Folk Costume Details and many other Hernmarck pieces. 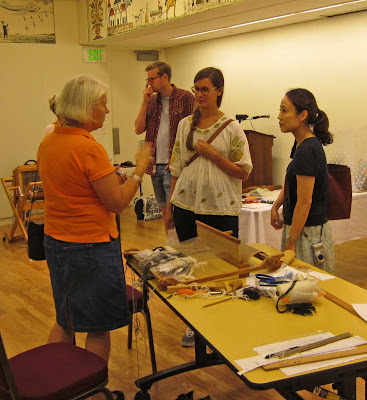 Helena's yarn comes from Walstedts, also in Sweden. She spends time there every year getting the colors right before they dye the yarn for her pieces. Here are the color cards for one of her large pieces (may have been Folk Costume Details). 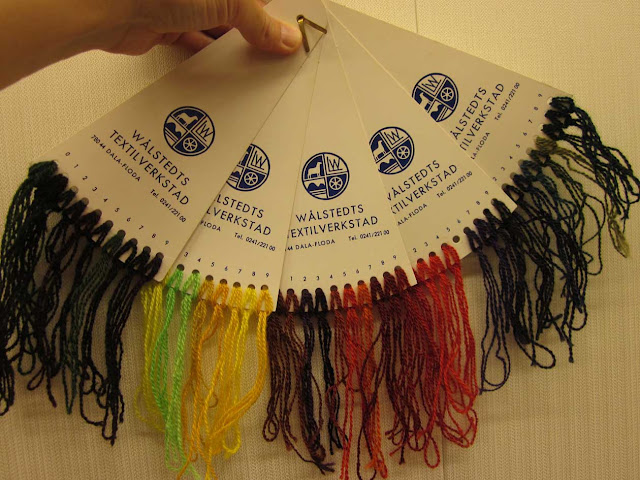 Here is Helena and I with a part of a sample she cut up to give to the class. It was great to go home with a little piece of her work and something to look at the actual technique on (besides what we wove ourselves). She is holding the photo of the tapestry that the sample was from. (Technically it wasn't a sample. She started the piece and didn't like the colors, so she cut it off and started over. It is comforting to know that even Helena Hernmarck starts over sometimes. I think the piece was Tabula Rasa.) 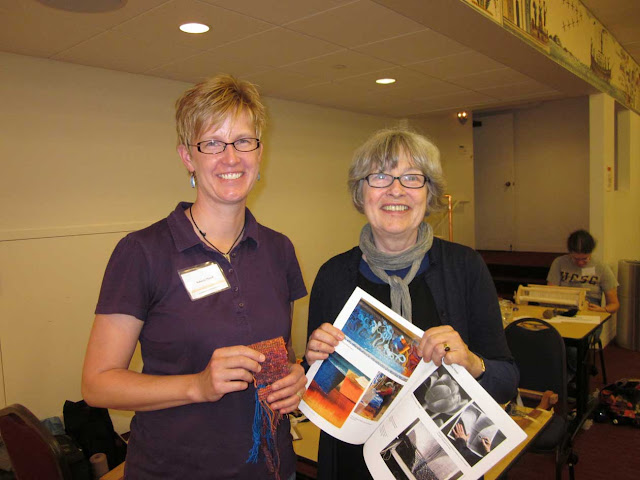 Helena was a wonderful teacher. She was patient and never stopped answering our continual questions. 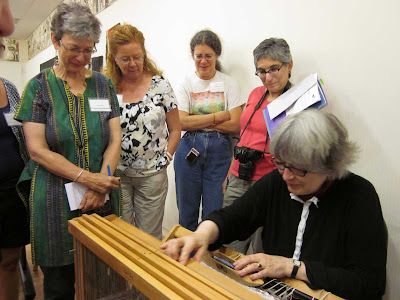 In Our Nature also included work by Team Hernmarck, a group of students she has been teaching in Sweden. This group included two Americans (Joan and Winnie) which was how she was persuaded to teach in the USA. Four of the members of Team Hernmarck were assistants for our class. I can't thank them enough!
I enjoyed talking to Lis a great deal. This piece was beautiful and really had a great sense of depth. I also loved her technique of creating a border that was comprised of a toned version of the central image. All of the Team Hernmarck weavers (there were at least 16 of them) had pieces in the show.
We had three days to learn Helena's technique. We wove in black and white so that we could focus on how to do the technique and get the most contrast for the creation of depth. I came to the workshop armed with the requested linen, wool, and cotton yarn in a greyscale. You can see my post about dyeing some of the yarn for this class earlier in the summer HERE. It was the Vevgarn I used though there isn't a photo of the greyscale. I also purchased pearl cotton in 10/2 and 16/2 linen also in greyscales. I was glad I had. The yarn was beautiful and fun to work with. I hadn't realized we weren't going to be able to work with color, so first chance I have, I will be weaving in this technique in color to see what happens. All that red, after all...

Here was a grooping of yarn arranged in a gradation which Lis and Helena were using to demonstrate a piece of an older tapestry Helena had done. 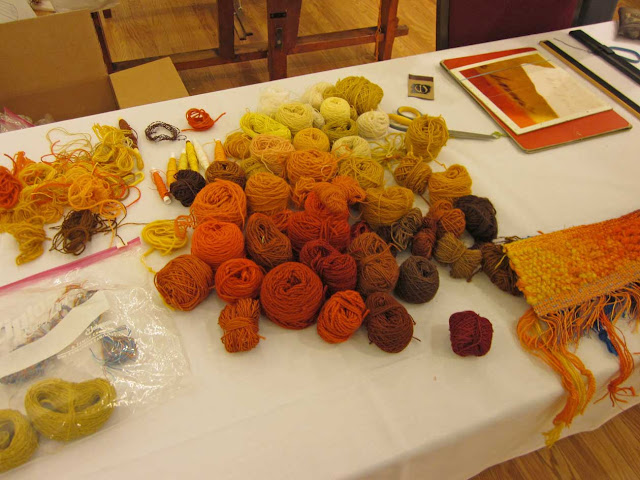 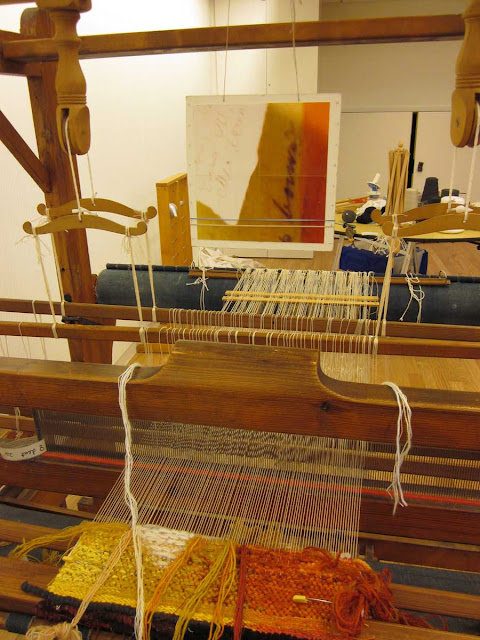 I learned a great deal at this workshop. It was a great privilege to be able to work and learn from Helena Hernmarck. If I am very very lucky I will get to do so again one day before too long. 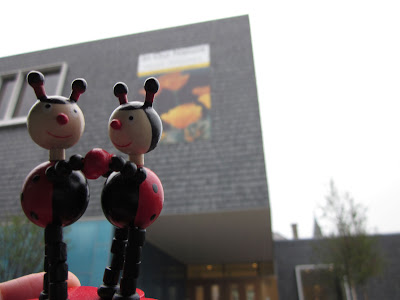 My interest lies in capturing the image of a fleeting moment in the sustained and time-honored process of tapestry weaving.
--Helena Hernmarck