The best day in Boulder I've ever had. The Schacht Spindle Company. 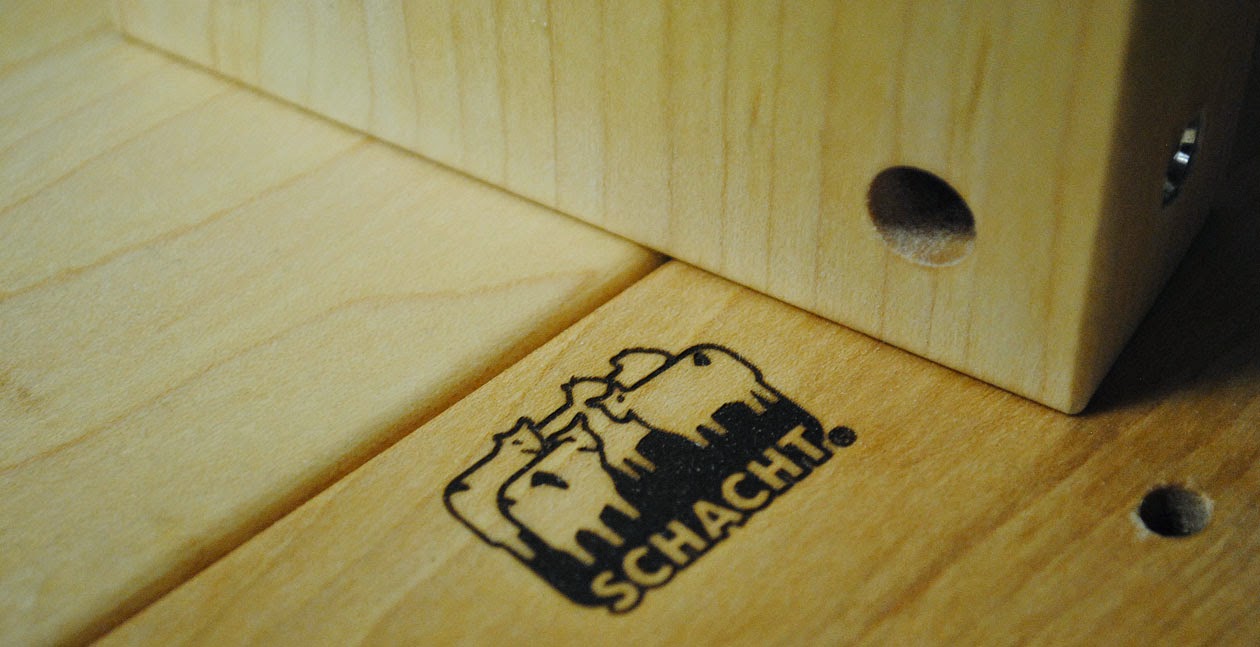 I am a bit of a big fiber geek. Yesterday was a red letter day. I visited the Schacht Spindle Company in Boulder. There is nothing better than going to see the factory where your fiber tools are made. If you're not familiar with Schacht (and if you're a weaver from the USA I'd be shocked if you weren't), they make excellent wooden weaving and spinning tools. Their factory was like a little tour through Santa's workshop. I could have stayed all day watching wonderful things being made.

I was met at the door by the amazing Denise Renee Grace who is in charge of sales and customer service. She gave us a wonderful tour and at the end of it I had a fantastic conversation with the owners of the company, Barry Schacht and Jane Patrick. I heard about the origins of the company in the late 60's and the evolution of it to its present day success as a weaving and spinning tool manufacturing company. And all the while I was distracted by an exquisite Sarah Swett tapestry on the wall of their conference room. It was a commission that tells the story of the beginning of their company. If you go, ask Barry to tell you the story about the peace symbol in the tapestry. Worth the trip.

The place is a virtual warren of Santa's helpers. There are clearly some incredibly skilled people working there. The sheer variety of parts being made and finished was astounding. 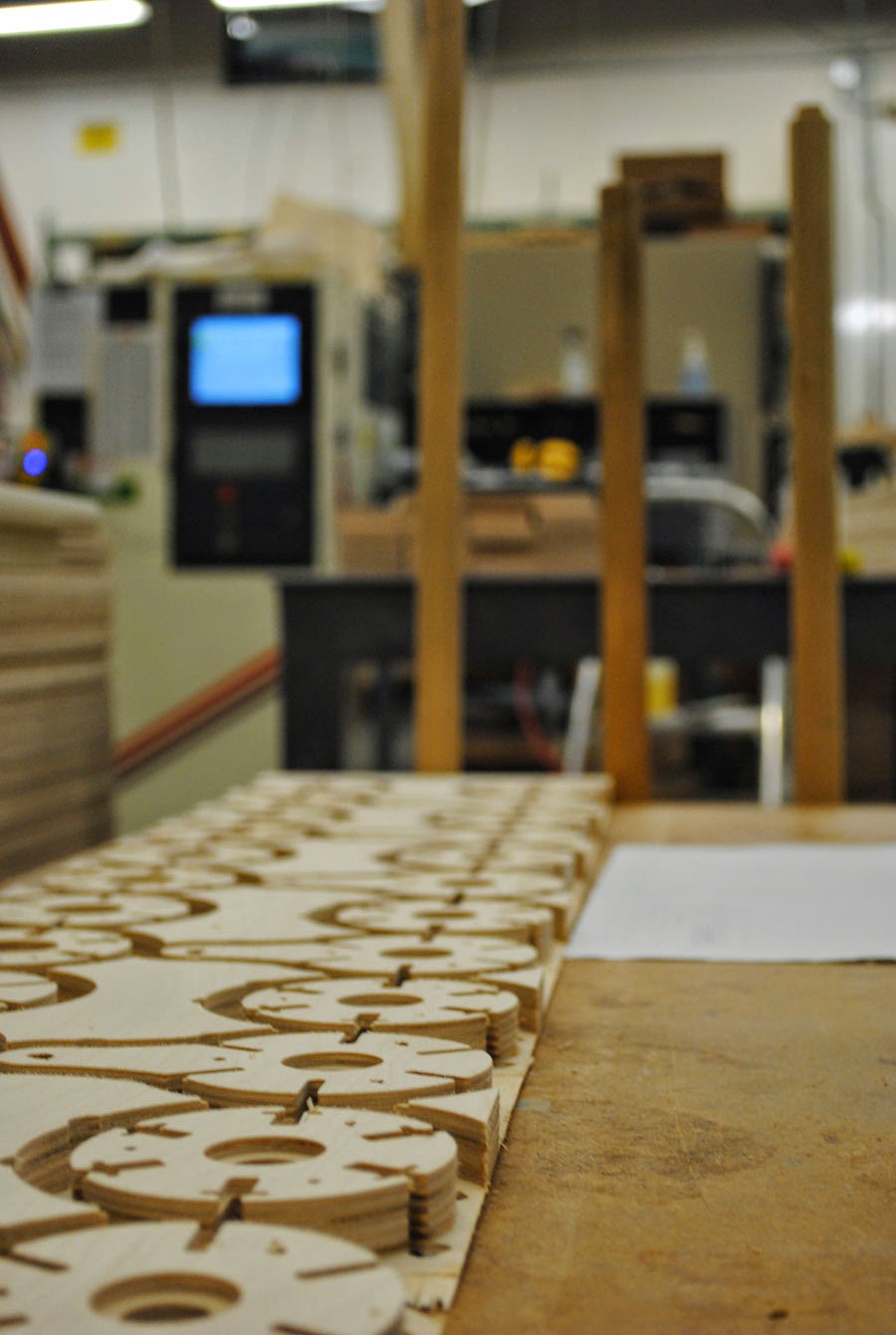 This is a computer numerical control router. They use these machines to cut most of their parts. Then the parts go through various extensive sanding and staining processes before being assembled. 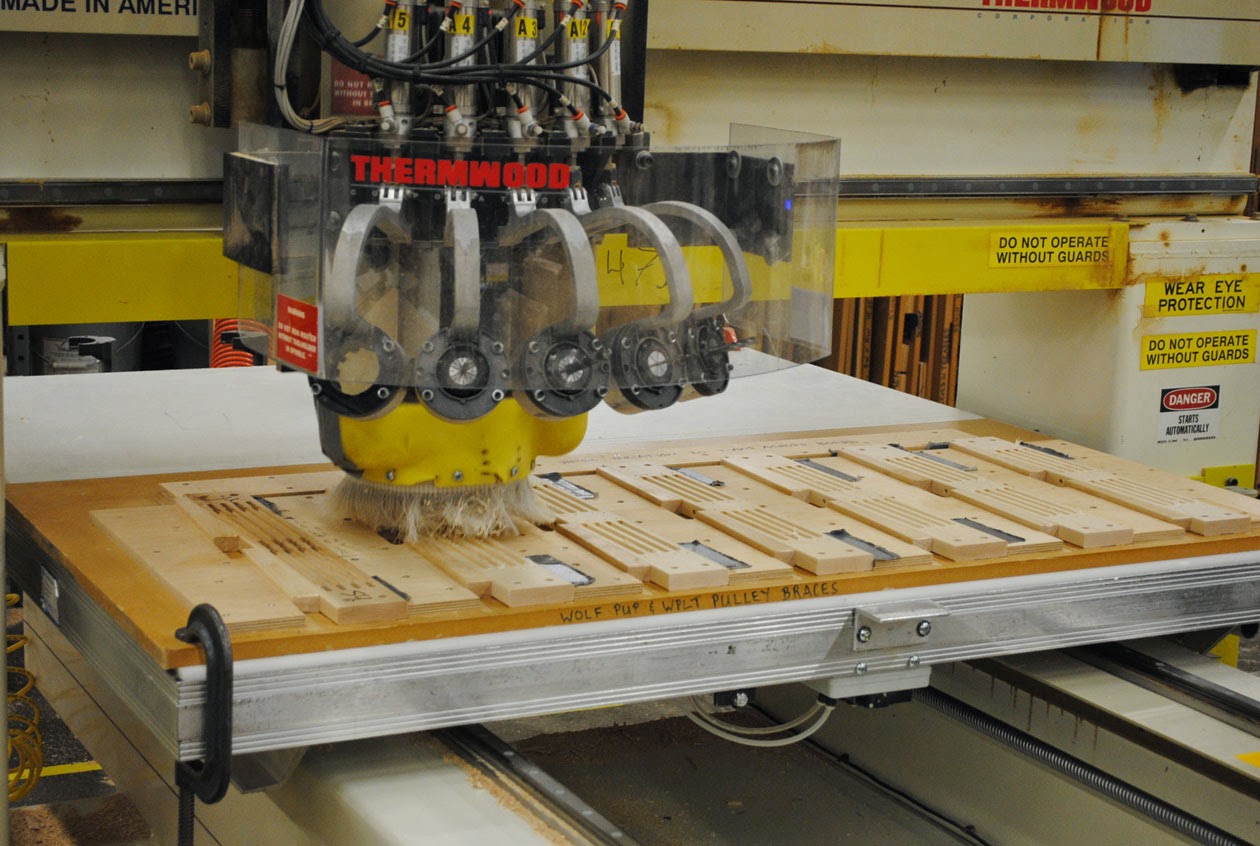 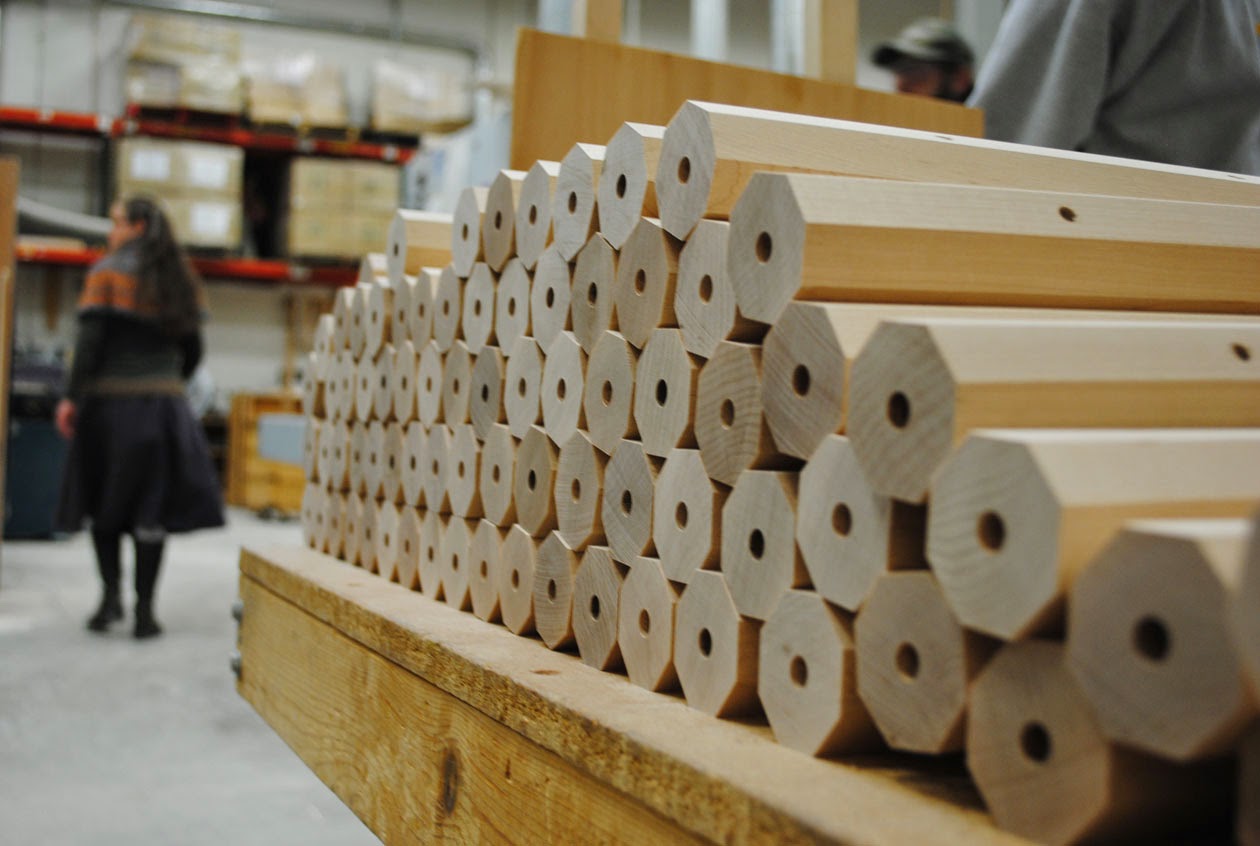 I wish I had taken photos of the process to make this wheel. It is the wheel from a Matchless spinning wheel. The Matchless is a gorgeous piece of equipment and seeing how this wheel was made was impressive. 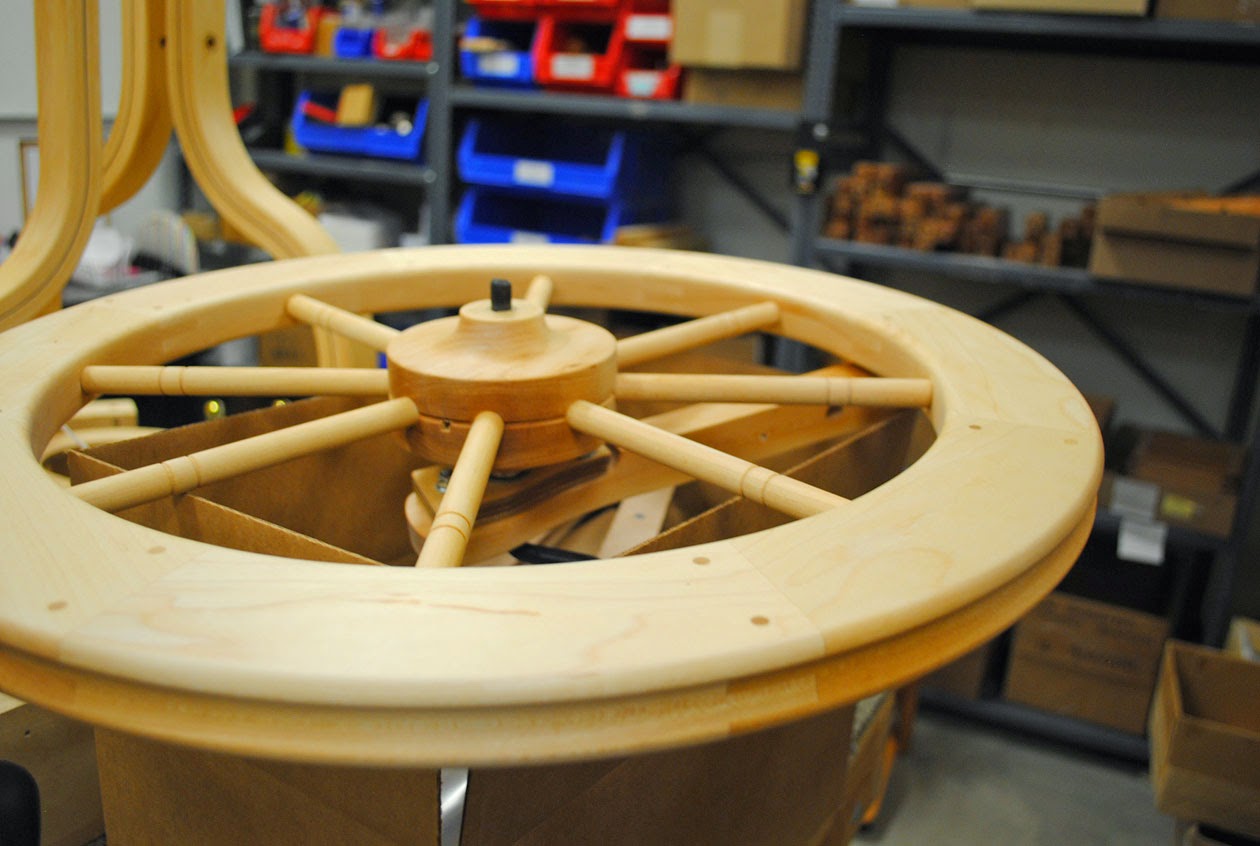 I own a Schacht Ladybug spinning wheel. I told Denise what year I bought it and she told me who made it. The actual craftsman who put it together. That is the kind of company it is. 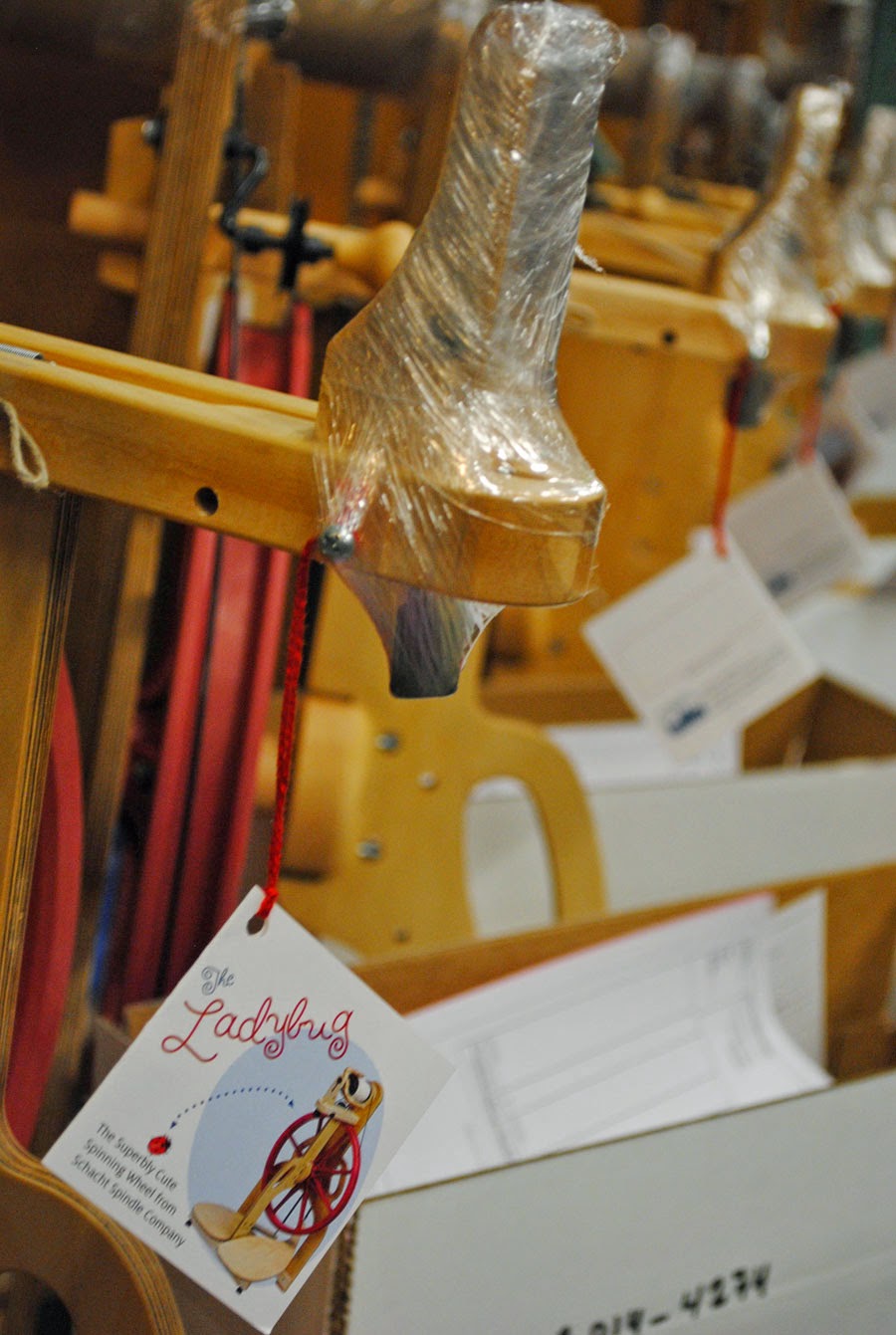 This is where the Wolf line of looms are made. Mighty Wolf, Baby Wolf, Wolf Pup. This one is a Baby Wolf just assembled. I have seen many of these looms in my workshops and they do quite well for tapestry. (So those of you who have one in the corner, give tapestry a go!) 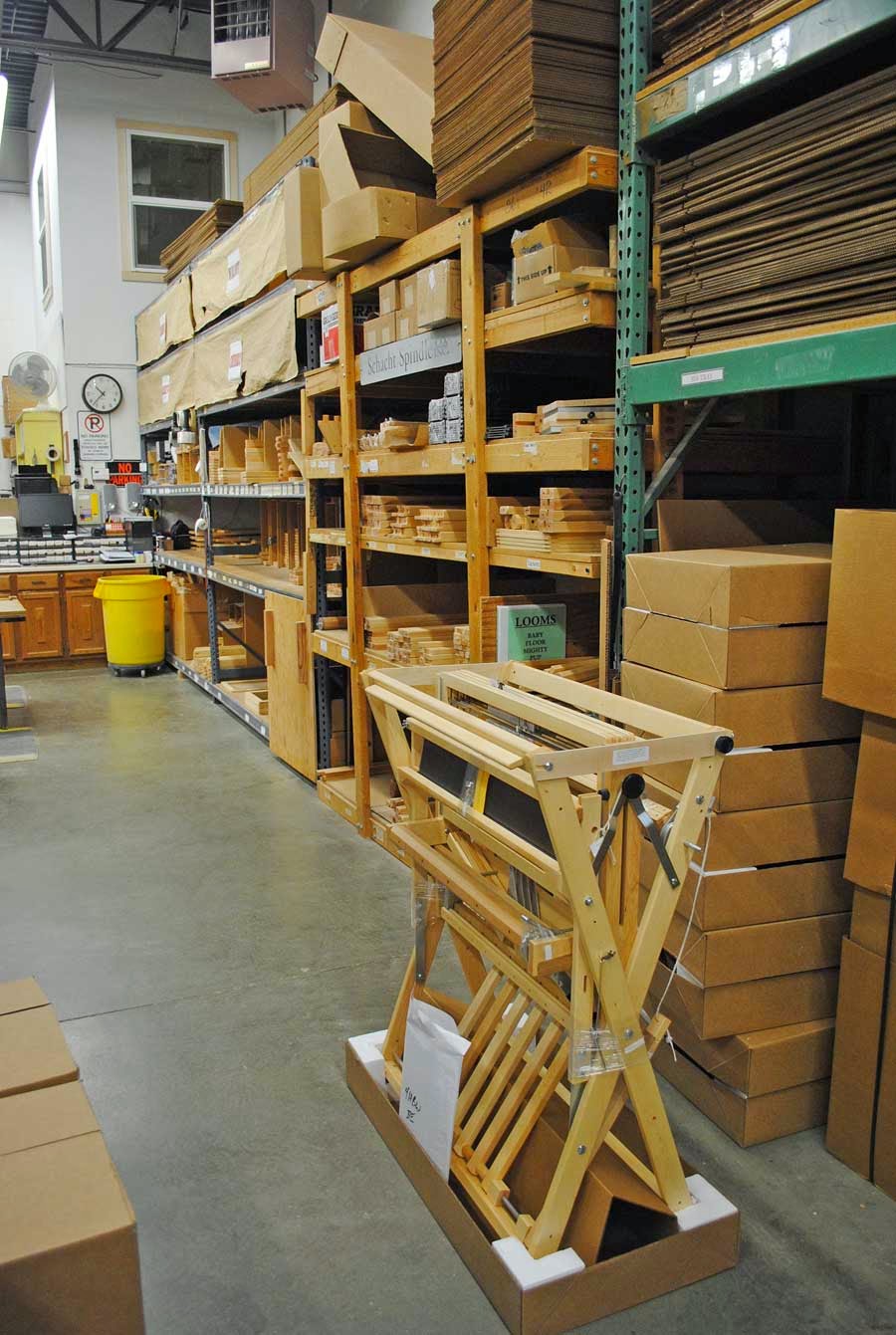 And of course, the granddaddy of all looms, the Cranbrook countermarche loom has been made by Schacht for almost two decades now. There is no need for me to say that this baby is a fantastic choice for a tapestry loom. 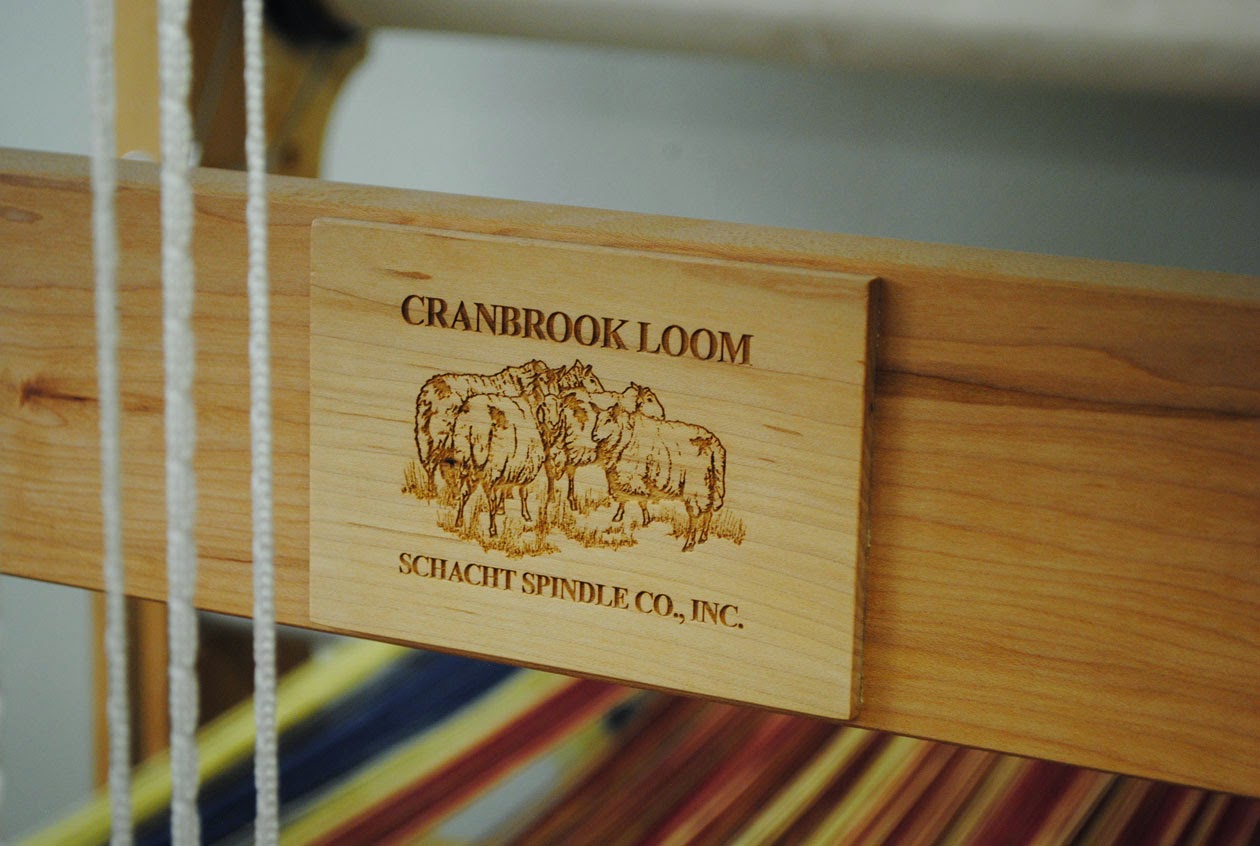 Remember in my dozen gift ideas for tapestry weavers blog post where I linked a few umbrella swifts? Forget about them. This is the best swift I've ever seen. It is going straight on my studio list for 2015. It moves so smoothly with so little encouragement and it has a revolution counter. It will clamp to a table with a lip and that is saying something. I considered trying to smuggle one out, but I was pretty sure Denise would notice. 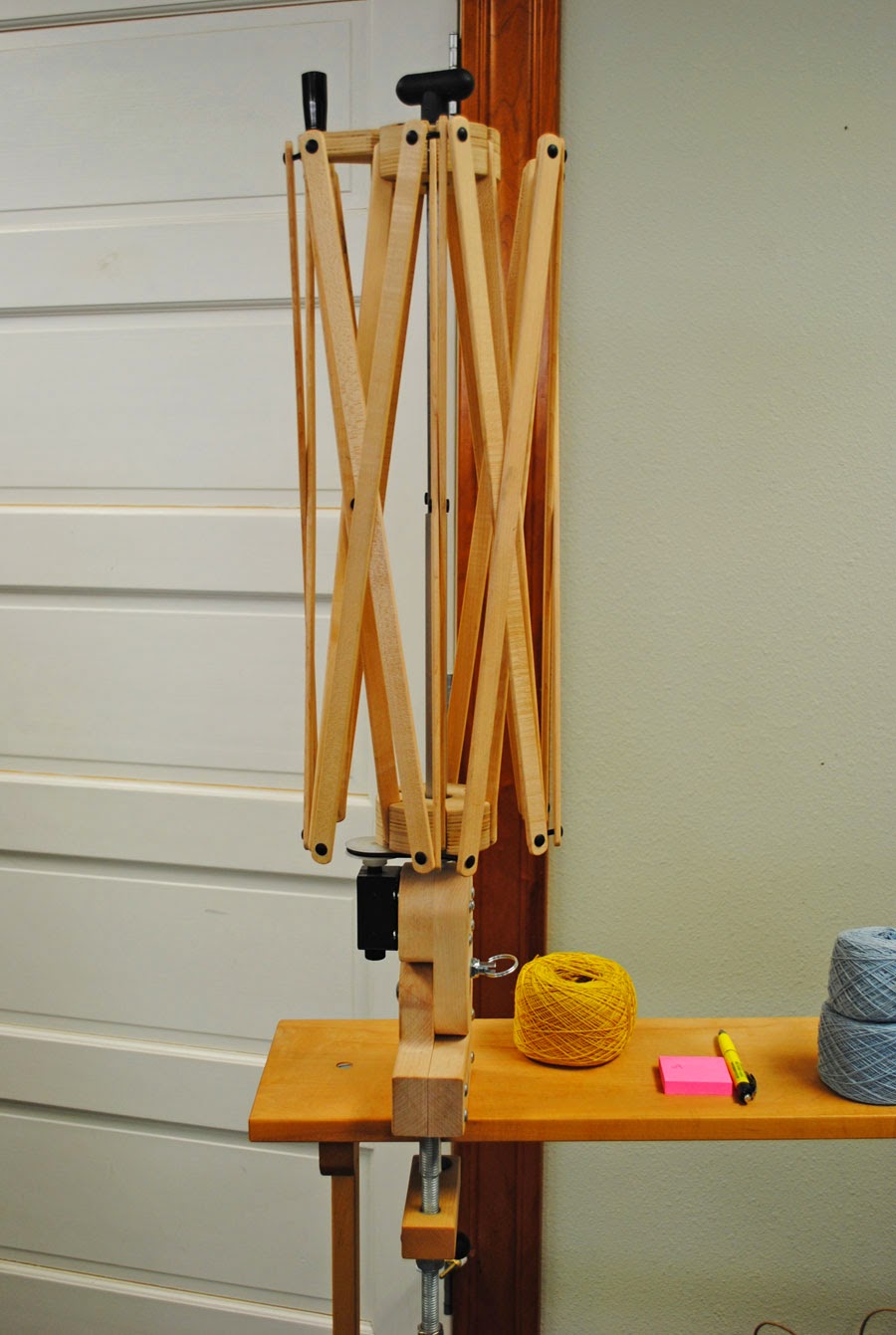 Jane Patrick is a fiber artist with many books and instructional DVDs to her name. Here is an intriguing book she wrote about rigid heddle weaving. After (sadly) leaving Schacht, I went to see the Boulder Handweavers Guild's juried show and saw a beautiful piece of Jane's. I was thrilled to meet her in person. 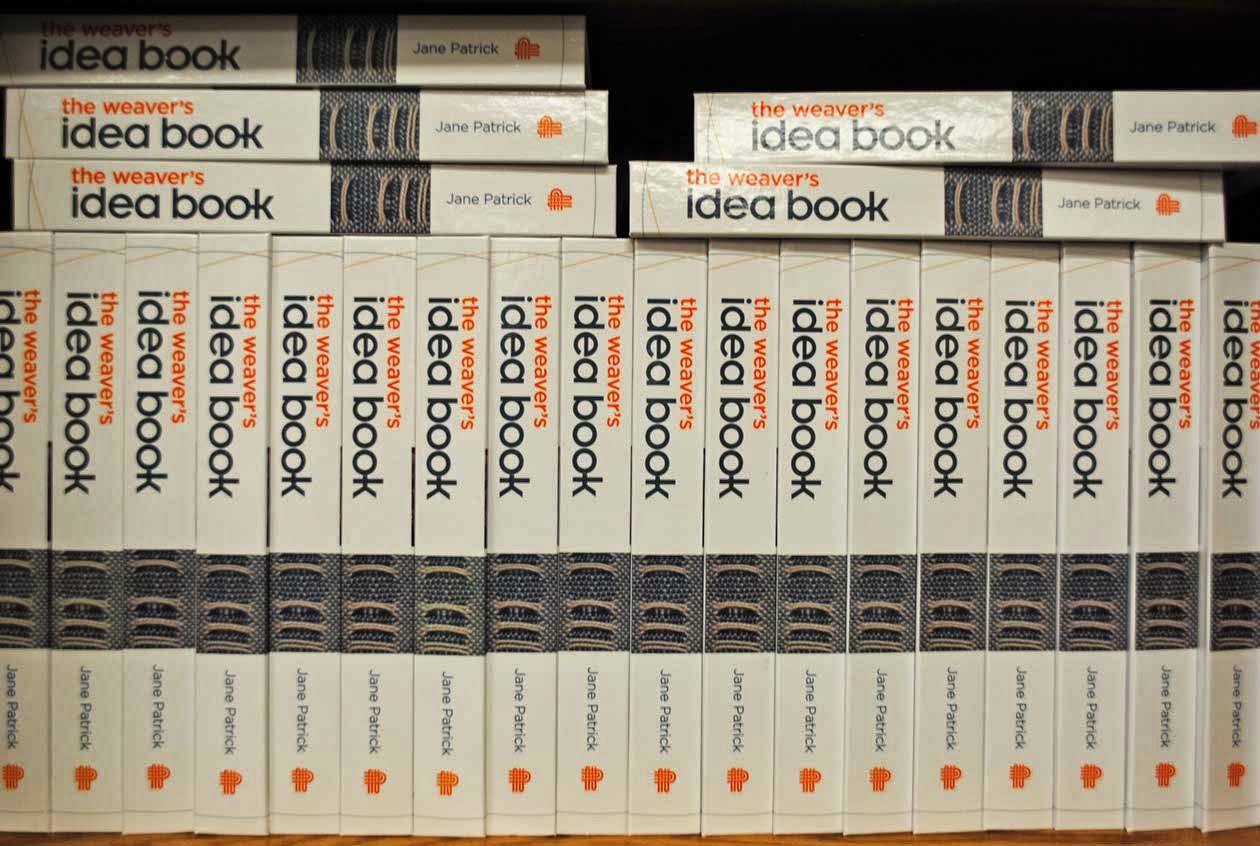 I left with a new toy. I bought a book about Pin Loom weaving a few months ago for various reasons, but didn't have a loom. I was going to make one, but then this one fell into my hands. Whoot! 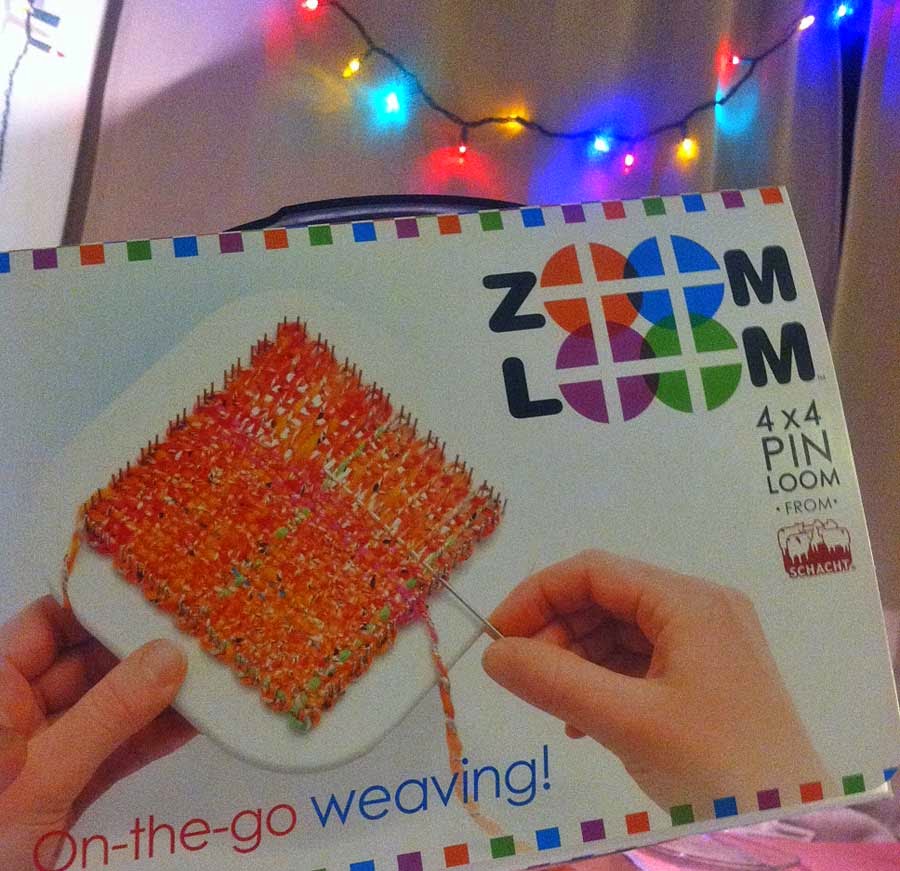 Someone had a lot of fun making Christmas decorations on this loom. 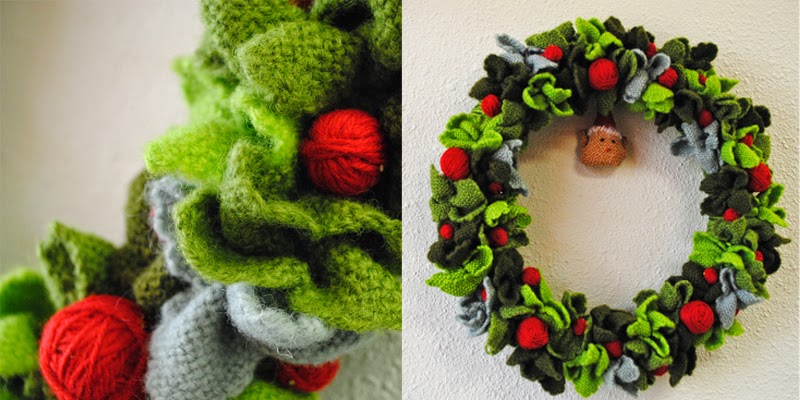 And, to make the story even better, the company has chickens. If you work there, you can sign up for a week to feed them and you get to take the eggs home. They even have a community garden. 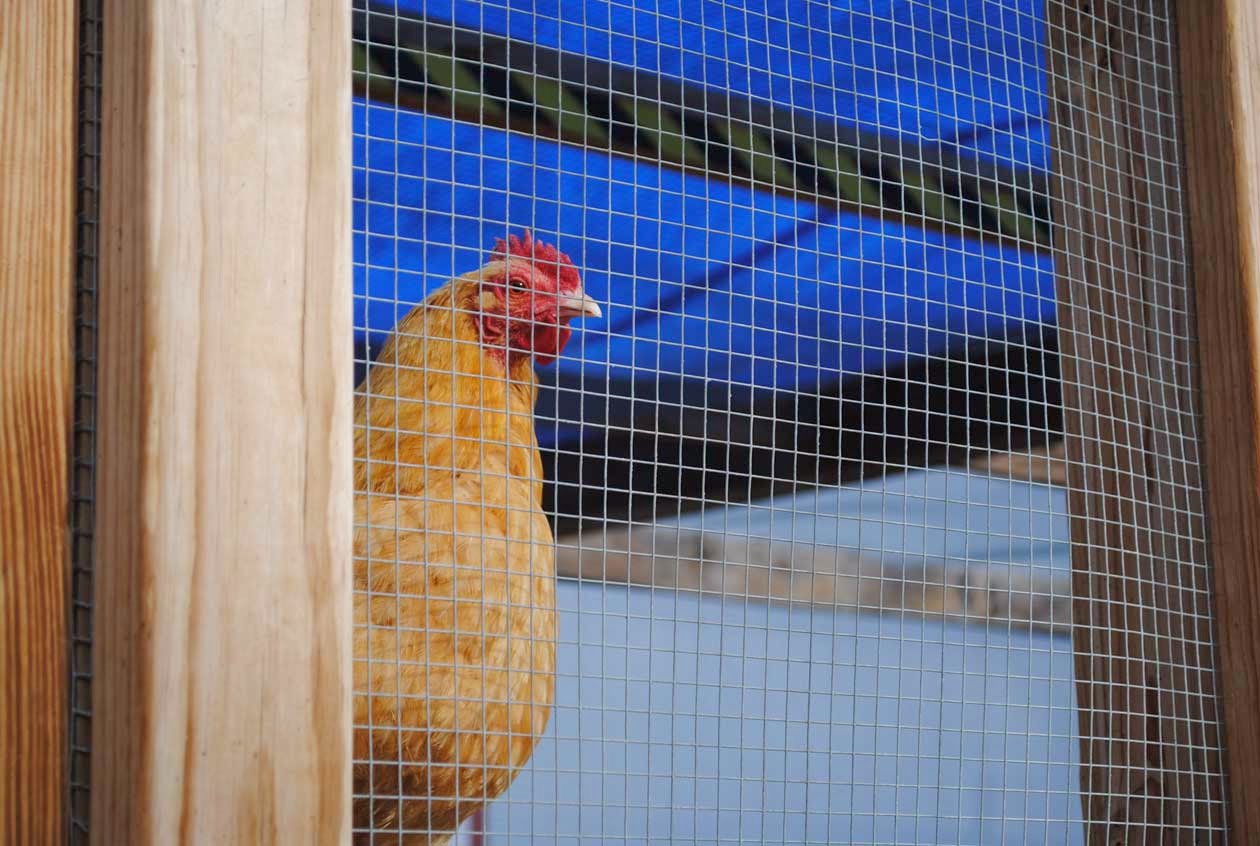 Their blog is excellent. Go visit it for more information about the company but also all kinds of projects. Their Spinzilla team blew my mind and I don't even spin (yet. January. It is planned. The legendary Maggie Casey has a class and she said I could bring my Schacht Ladybug.). 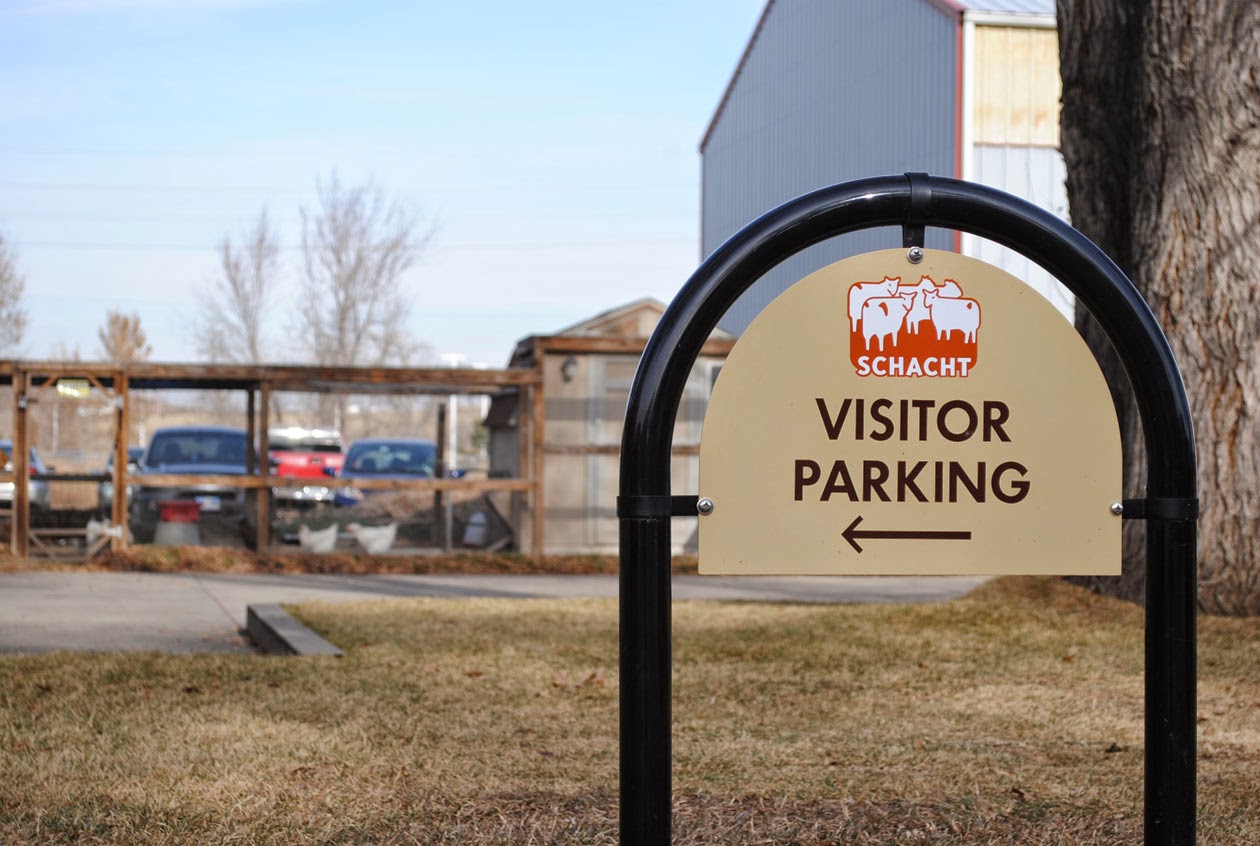 Chickens. In the parking lot.
Posted by Rebecca Mezoff