In February I was able to attend a Textile Talk at the Denver Art Museum with conservator Alison McCloskey and her team. They were working on stabilizing two large tapestries for the upcoming tapestry show which opens in June 2015. The smaller of the two pieces was a Flemish tapestry called The Birth of the Prince of Peace which had a wool warp and wool and silk weft. It was from the early 16th century which makes this piece 500 years old.
I really enjoyed hearing about how they stabilize these textiles. The goal for them is to keep the integrity of the textile as much as possible. There are many old repairs which are visible in the photos, most of which they aren't redoing. All of the rough stitching you see was probably repairs made hundreds of years after the initial weaving. There are spots where a repair weft was put in that is a markedly different color than the surrounding tapestry. Probably they matched at one point, but the fiber faded differently. 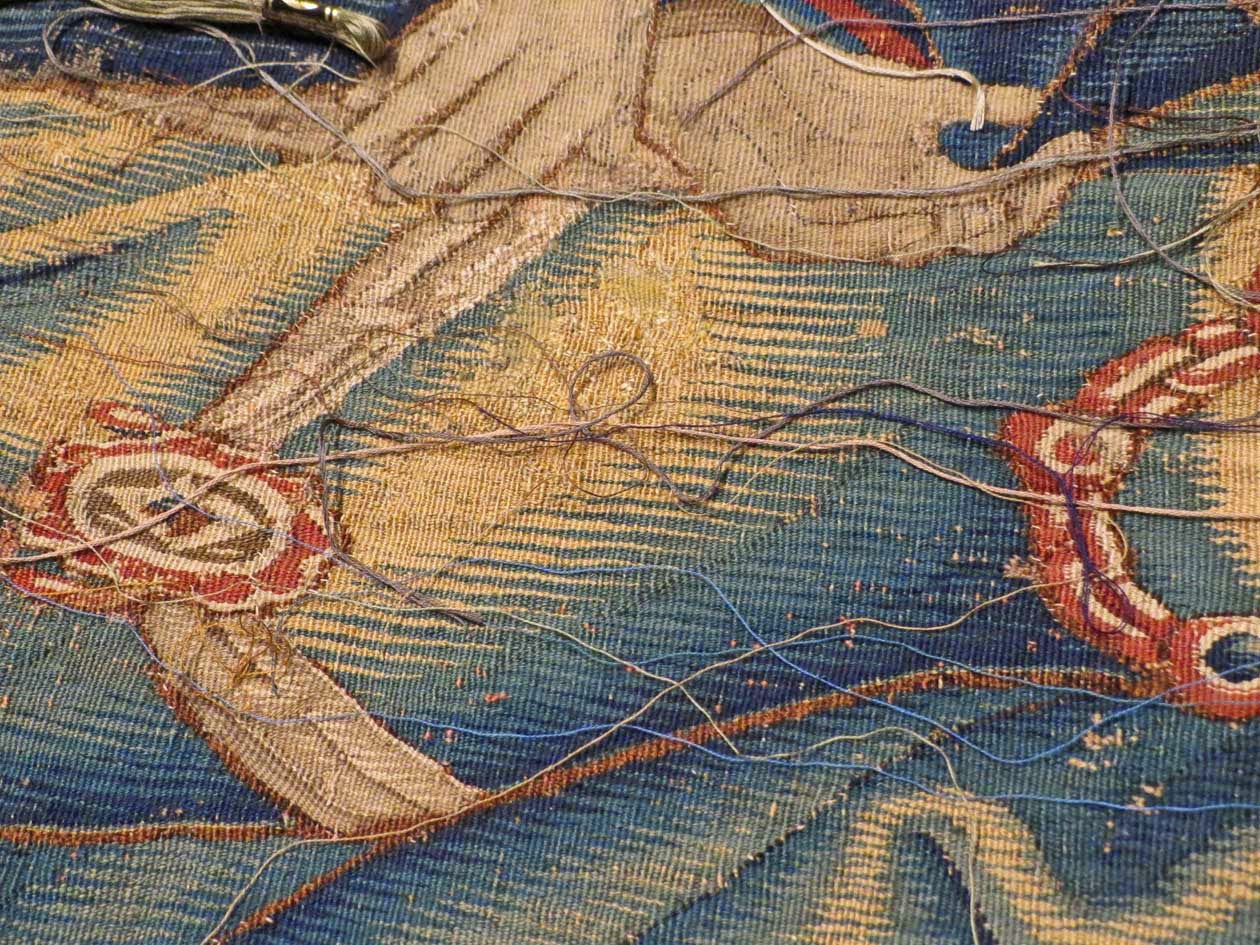 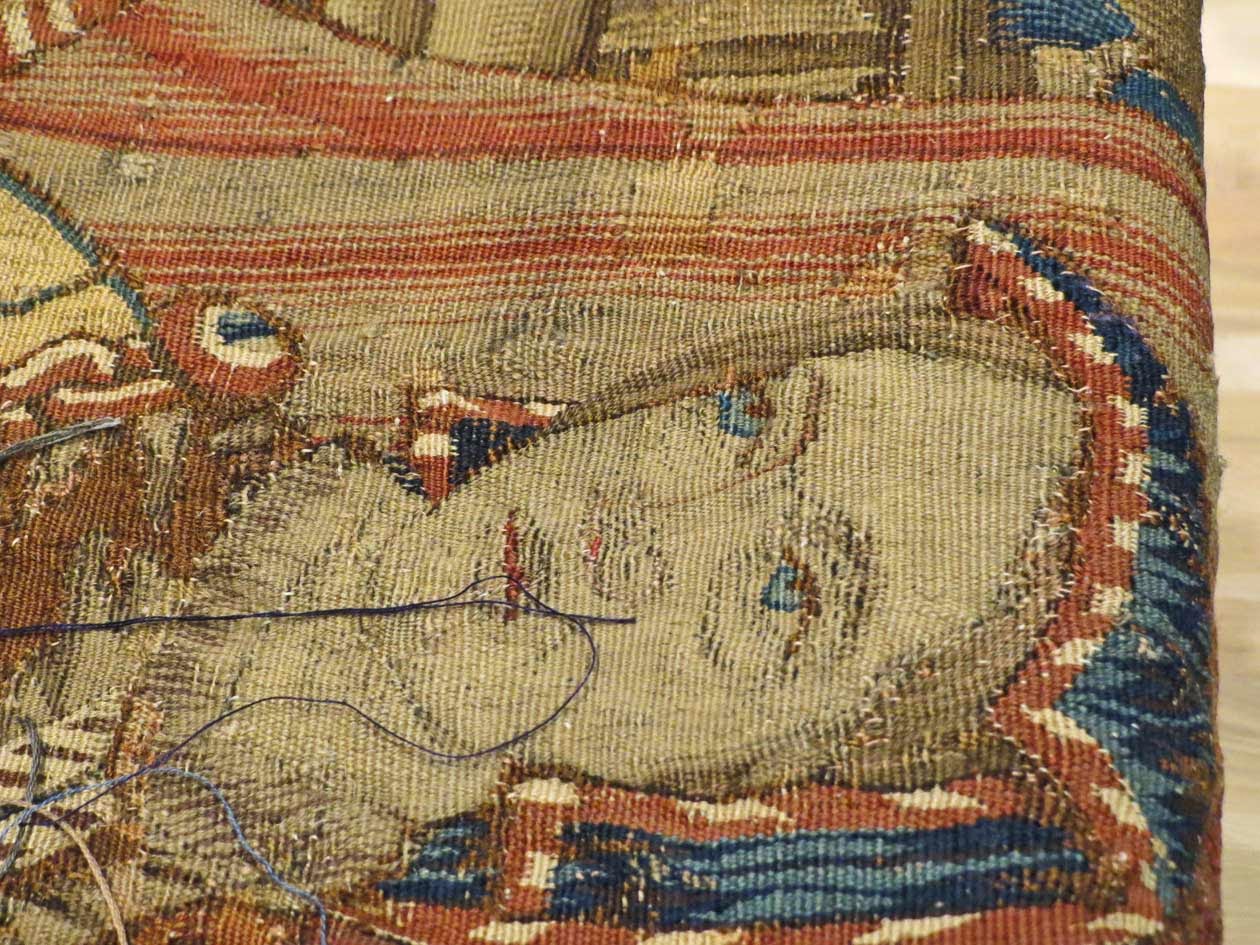 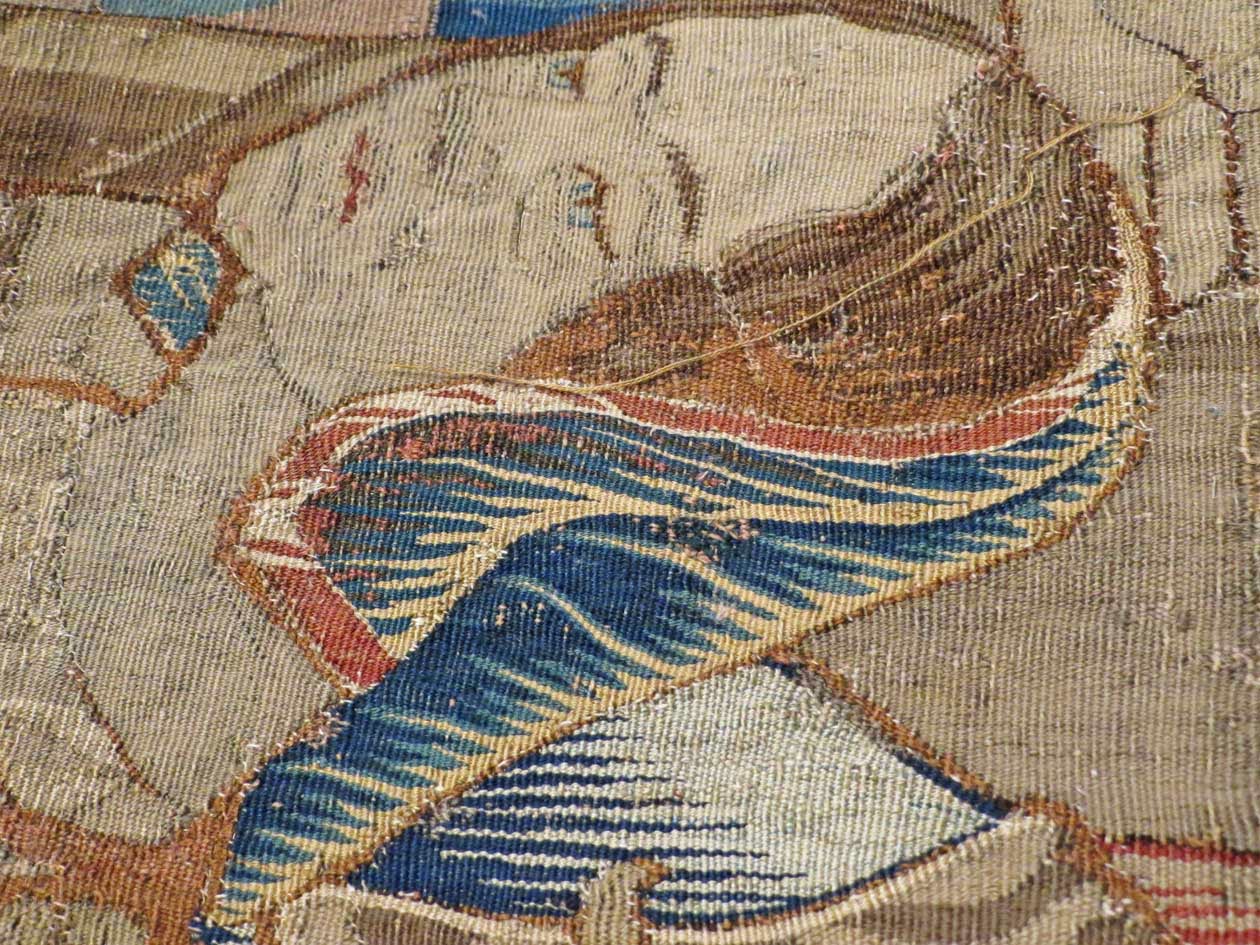 The conservator who was working on this piece (who's name I did not write down unfortunately!) was using DMC embroidery floss to do some of the twined stabilization. 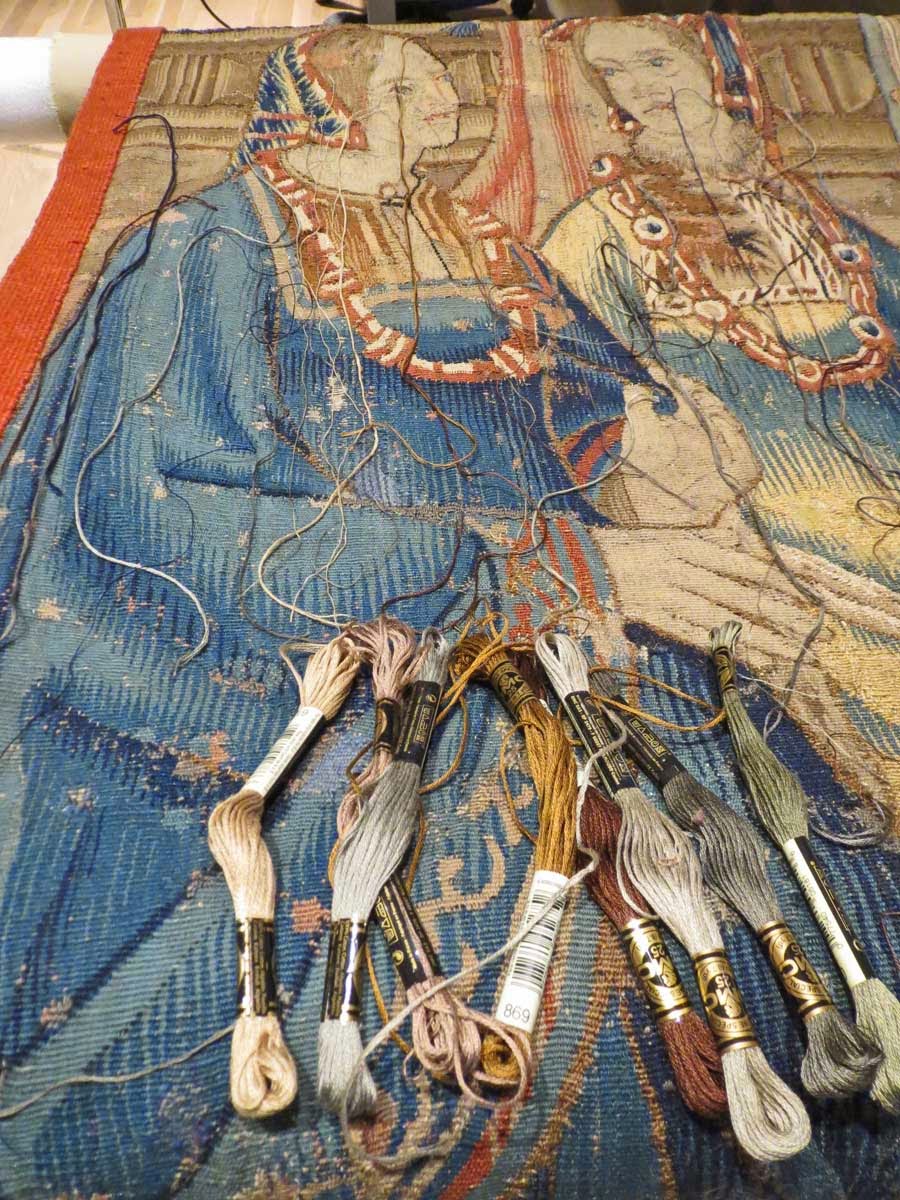 You can see the twined stitch they are using for stabilization in this close-up of an 18th century Spanish table cover they are also restoring for the exhibit. 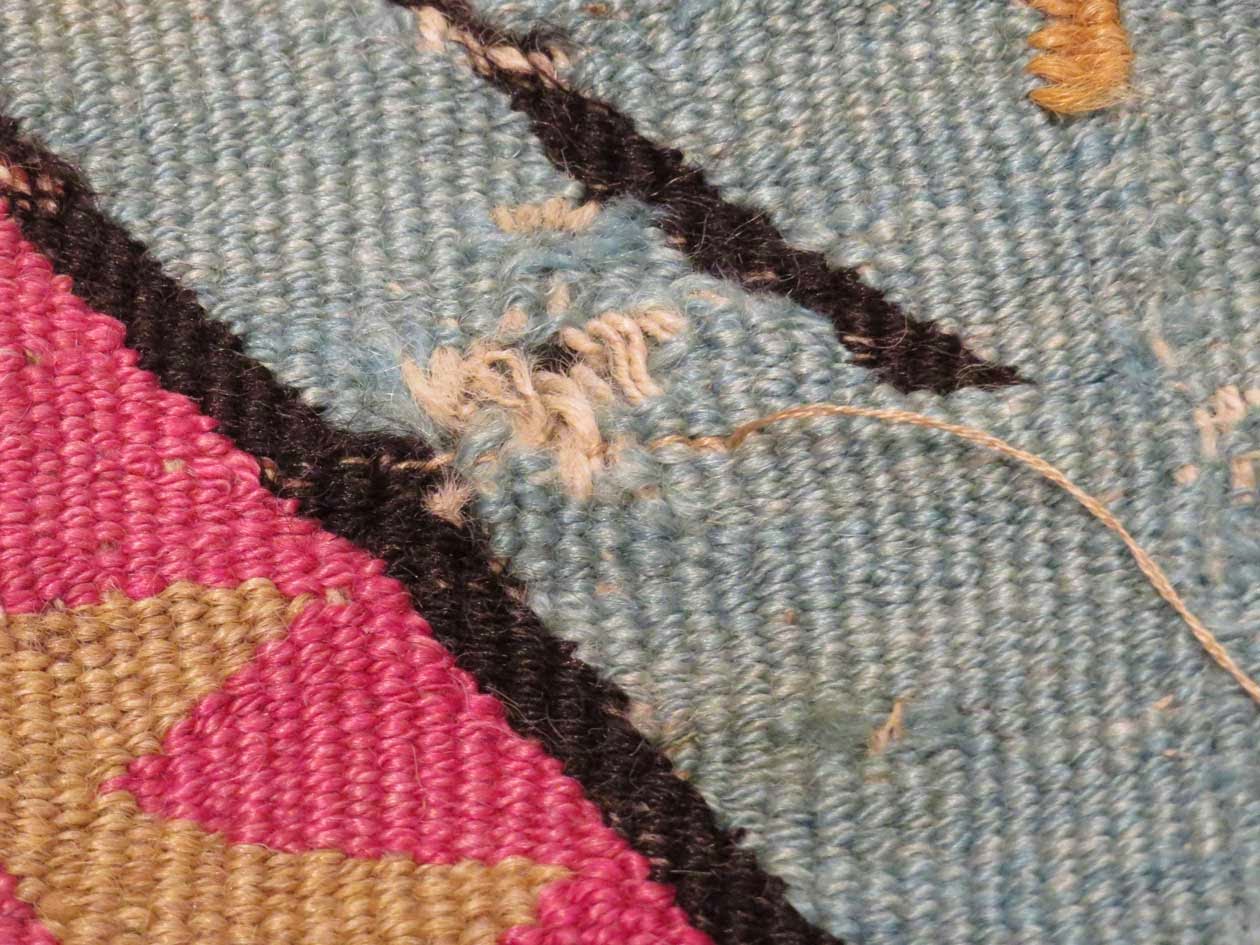 And of course I took a few photos for use as illustrations of hachure use in medieval textiles. 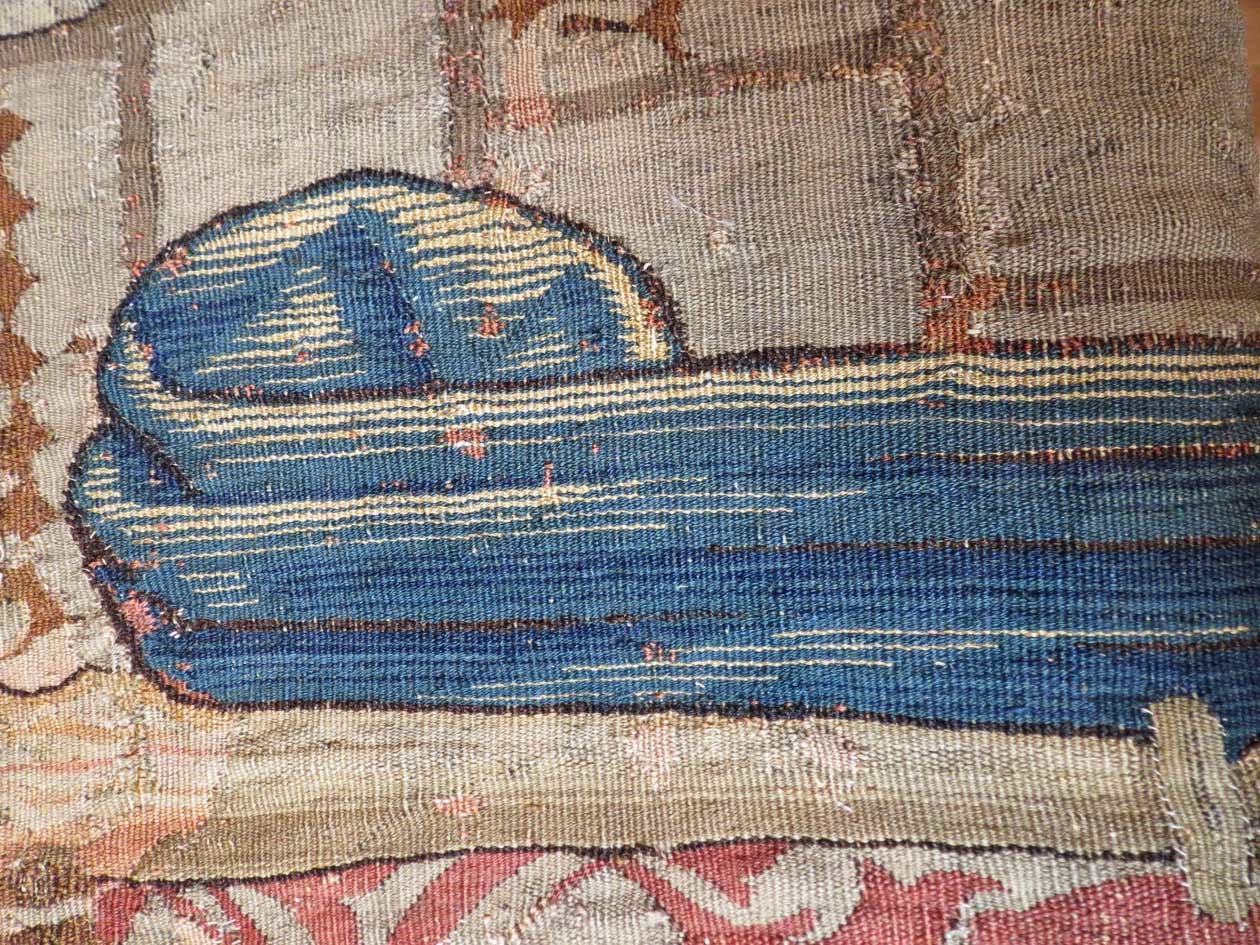 The other piece we looked at was a 9 by 20 foot tapestry called The Peasant's Feast, also Flemish. This is a photograph of what the whole tapestry looks like. 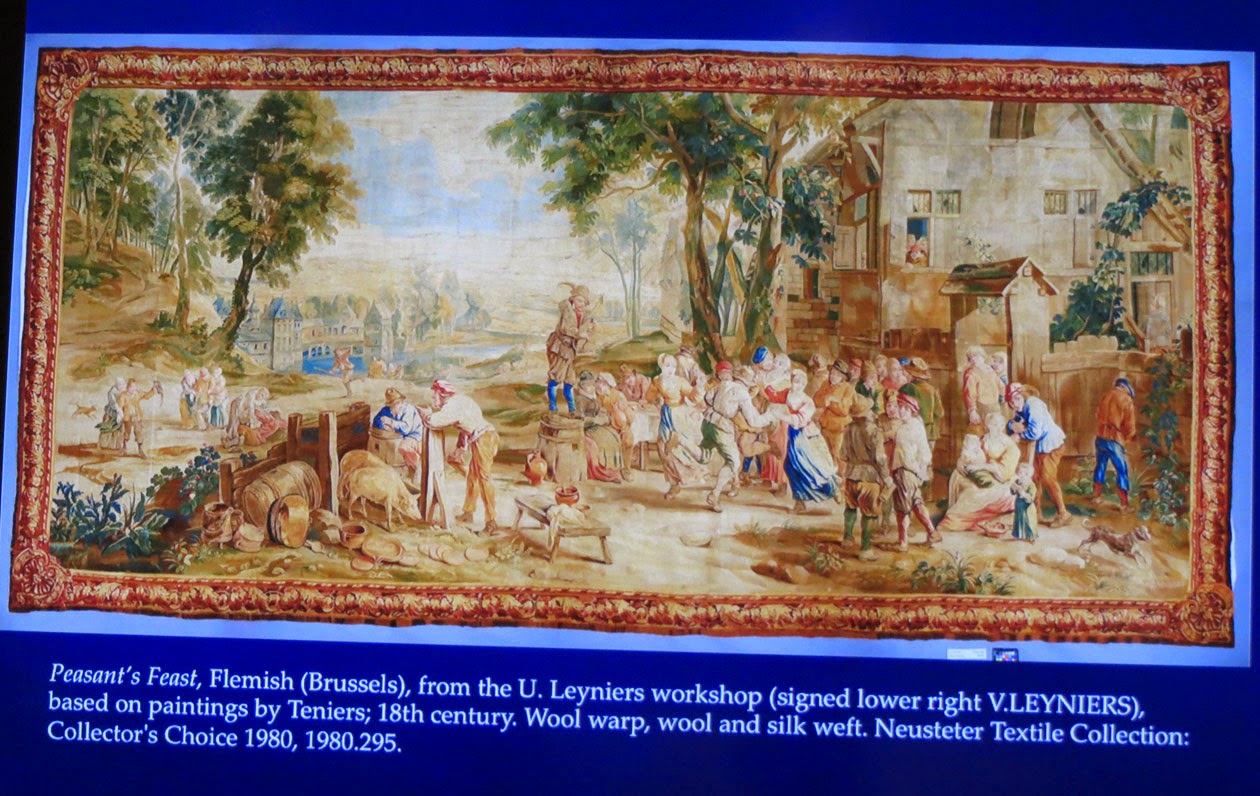 And this is what we saw of it. 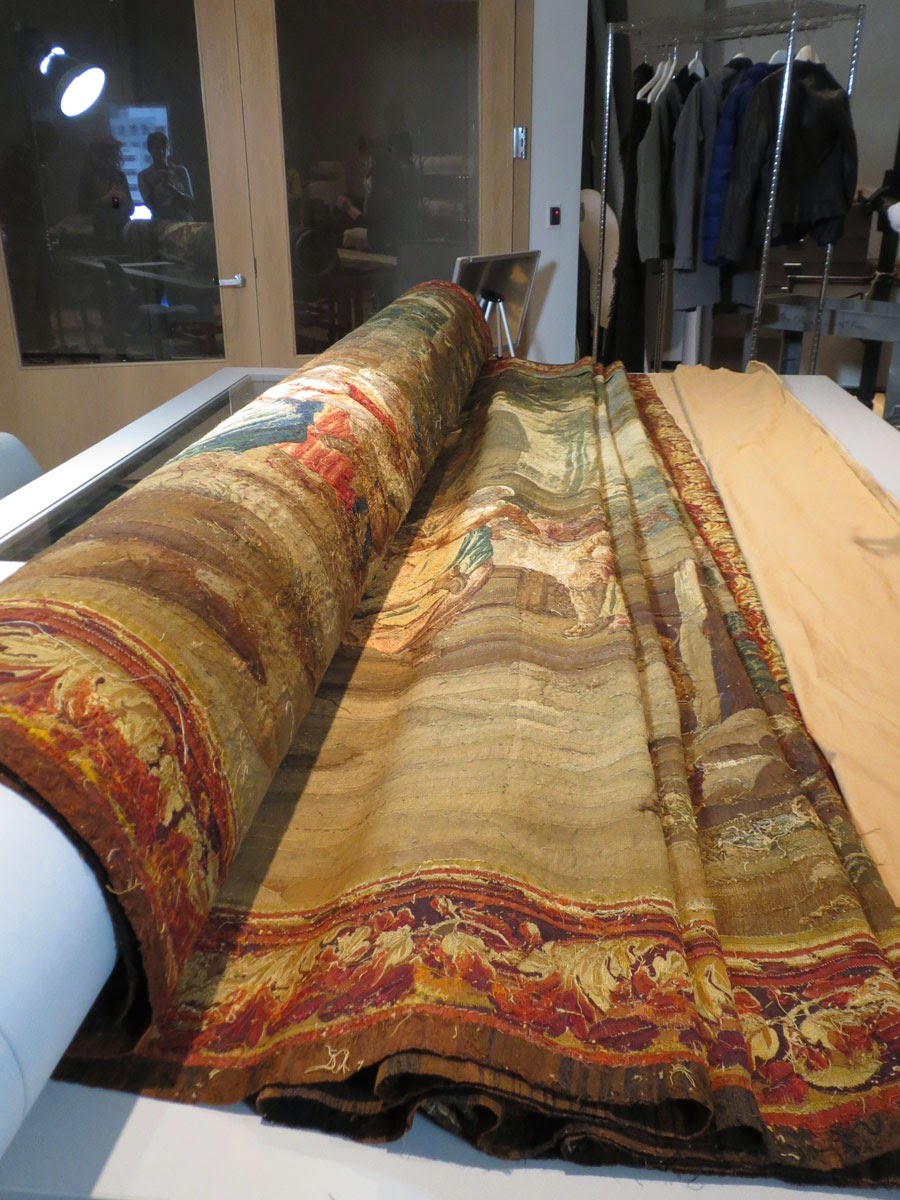 And a detail from the back which was rolled around the tube. 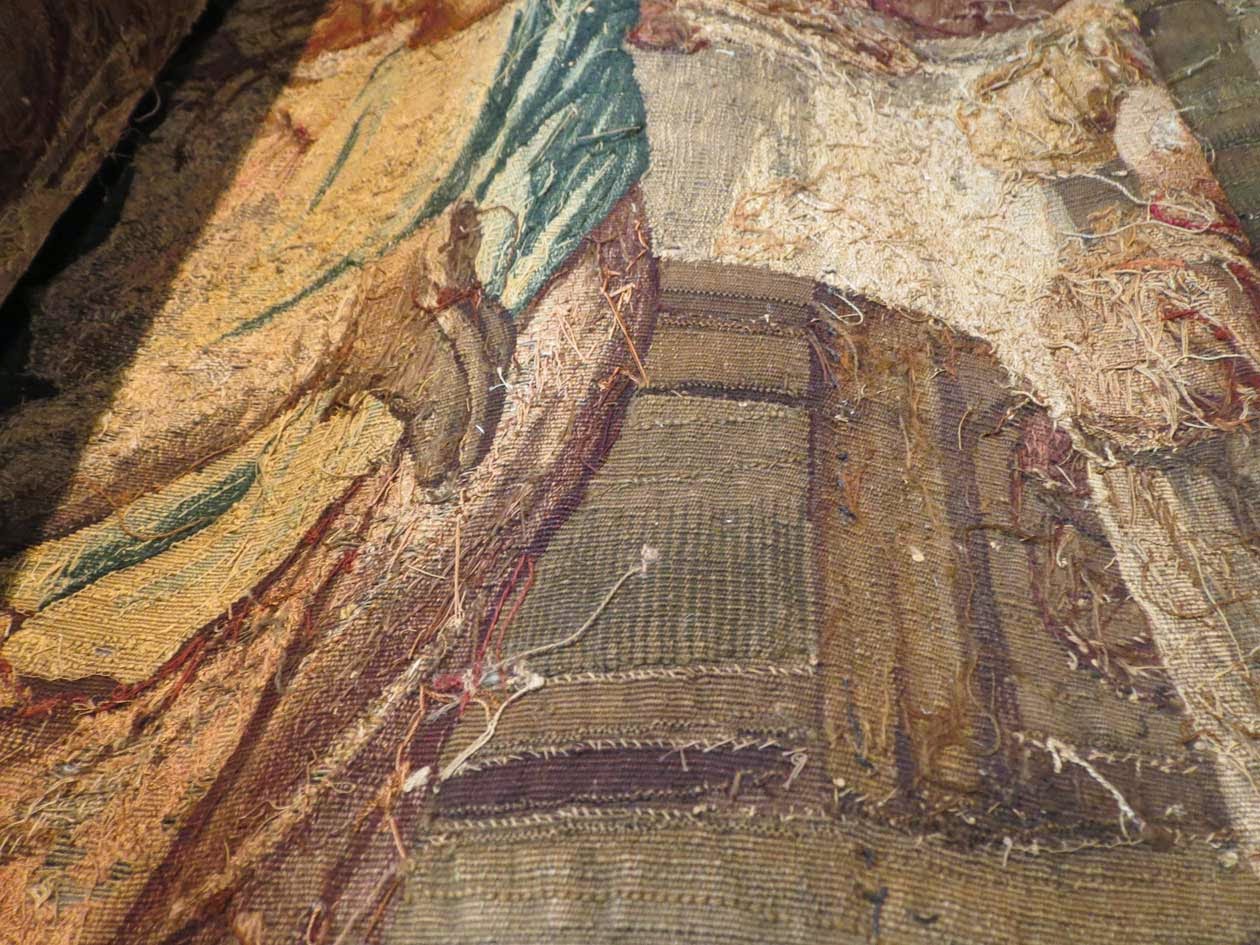 Alison talked about how they will get this huge and very heavy tapestry up on the wall without damaging it. It involves two lifts and a platform with the tapestry accordian folded on top. It will be raised to the top, attached to the hanging system, and then the two lifts will be lowered simultaneously allowing the tapestry to unfold. I was happy to hear that they use a similar hanging system to mine--twill tape and velcro.

The information about the upcoming tapestry show is not on the Denver Art Museum's website yet, but it will be soon. The show opens in June and will run for most of a year. It will include these historic tapestries as well as many examples of contemporary tapestry from their collection.

All this discussion of medieval tapestries brought me back to the conversation I had recently with Archie Brennan as I was writing my article for the Spring 2015 issue of Fiber Art Now.** Archie talked both to me and in many talks and articles you can find if you dig a little about how tapestry became a reproductive medium in the middle ages. That means that weavers were trained to copy a painting in thread. This brought tapestry weaving away from the lovely improvisational work we see in the Coptic tapestry fragments to something that was stiffer and less creative from the weaver's perspective. Of course those weavers were and are incredibly skilled. But somewhere in that practice of copying paintings, tapestry lost its ability to be an art medium in its own right. It is my opinion that we need to regain the standing of the work of the artist/weaver as an art form before tapestry can even hope to become recognized as more than a "decorative art" or craft.

And of course I also got to see the chief blanket piece of James Koehler which will be in the tapestry show. I wrote more about that on this blog post:
A Chief Blanket-inspired Tapestry of James Koehler at the Denver Art Museum
** The article in Fiber Art Now is called Susan Martin Maffei & Archie Brennan: Tapestry Partners and Innovators. It is in the Spring 2015 issue which is just coming out now. With another huge thank you to Archie and Susan for their generous donation of time and resources to the article. I learned so much from both of them.
Posted by Rebecca Mezoff