So Warped. Startitis for weavers.

Knitters talk about startitis. It is that thing that happens when suddenly you have to cast on another project even though you have four projects you're willing to admit to in your knitting basket and five or six more in the back of your closet that you're not. I had a similar affliction last week on the weaving front.

I warped three looms. Sometimes these things just happen... and looms get warped. They were all small projects as the big lifeline project on the Harrisville is not done yet. Maybe I just needed something small to work on until that big thing in the studio is finished. Something I can wrap my head around. Something simple.

Loom #1
I warped the big Macomber for some samples for the Simultaneous Contrast color class I'm teaching at YarnFest this year. I'll be trying some new color combinations for examples in this fascinating perceptual thing that is color. It is all rather Itten/Albers, isn't it? The exercise below is a value study. I bet you can see where I am going to dye another step in the grayscale?!

This loom is a 48 inch Macomber floor loom, 16 harness (of which I only ever use four). It is the only jack loom that I currently recommend for tapestry weaving. 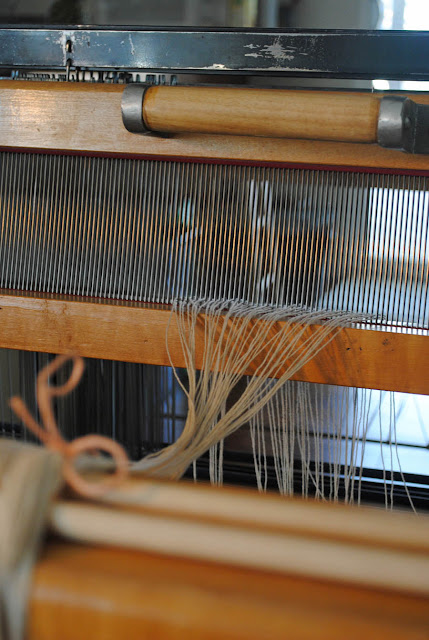 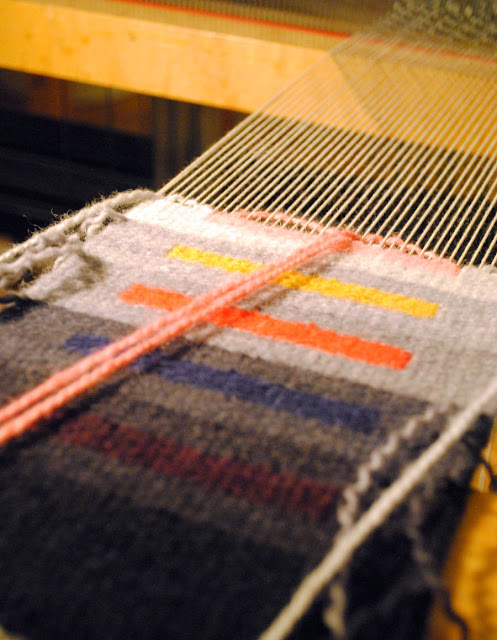 Loom #2
After reading Sarah Swett's fantastic blog post about four-selvedge warping, I had the bug to try it myself. I had been putting it off until I make a pipe loom, but decided that since I had some empty Mirrix looms sitting around (the "empty" part being fairly rare), I should just try it now. That project involved a trip to the fly shop. Not being a fisherman, it was quite the adventure. I thought for a second I had wandered into a bead shop with the rooms full of little boxes with little things in them! (turns out those were flies for fishing, not beads) At any rate, the men working there were not so sure what I was going to use the fly line backing for, but the word "weaving" seemed to ring a bell.

After the fly store, I made a trip to the hardware store for some PVC to make a jig. Worked like a dream. With computer next to me, following Sarah's instructions, the deed was done. 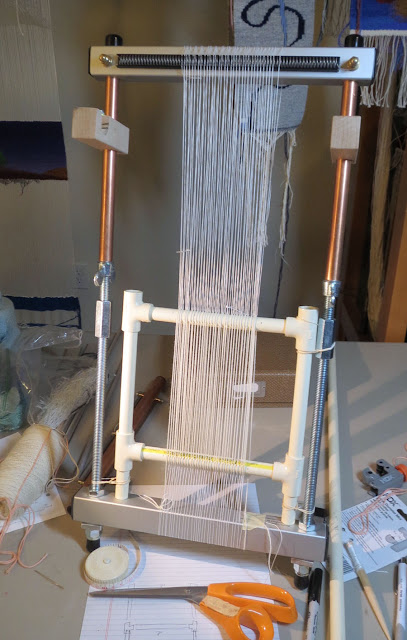 Here is the problem with the way I warped it. Usually on a Mirrix there are two complete layers of warp. For four-selvedge, the two layers of supplemental warp have to be pulled together and the fat beam at the top of the Mirrix means that the shedding device isn't going to work at the top of this piece. And I even put the short extenders on this Little Guy loom. Next time I do this on the Mirrix, I am going to suspend a thinner rod under the top beam. This will mean I can't use the coil for spacing, but in this case I think it will be a worthy sacrifice. Or this would be a case to consider using the long extenders (which I do not own yet). 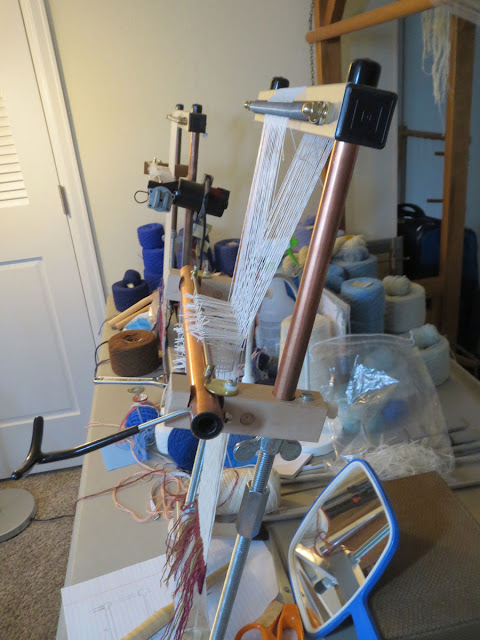 Here is the work so far! This is the late-night magic weaving this week I talk more about in my newsletter today. (Sign up here if you haven't already!) It kind of looks like magic, doesn't it? 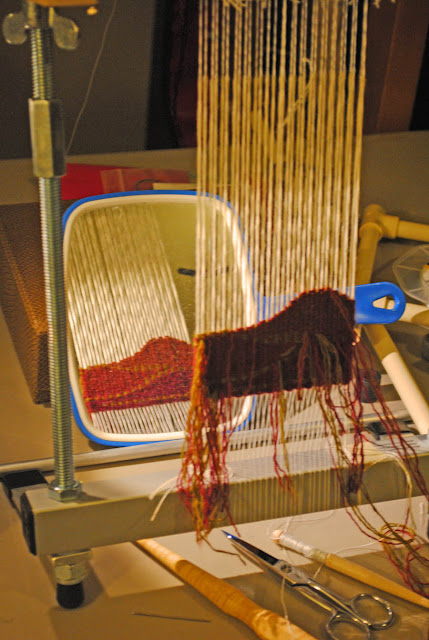 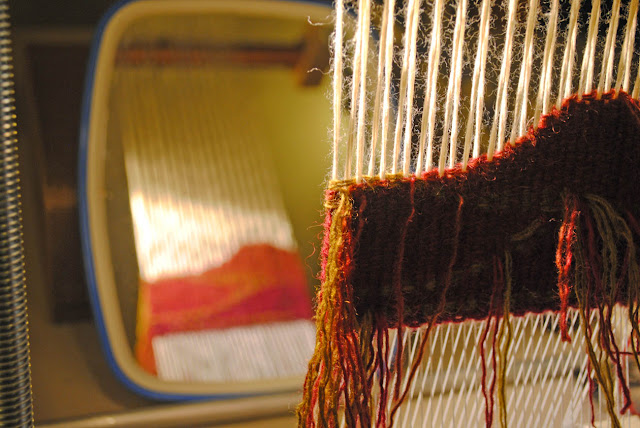 Loom #3
The third loom was the baby Macomber. This was my grandmother's very first loom which she bought after seeing a cottage neighbor at Eight Point Lake weaving. It is a very old piece of equipment (and still going strong, BRAVO Macomber!) I warped it for an experiment in Swedish weaving I participated in at Shuttles, Spindles, and Skeins in Boulder last weekend. Joanne Hall was teaching. This is a linen warp in three colors, three ends woven as one. 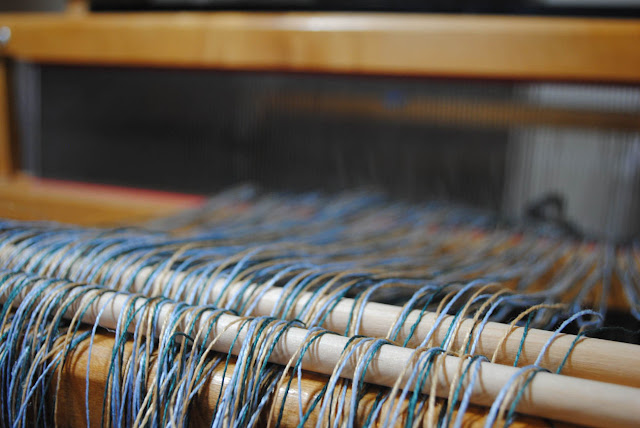 I went to the workshop hoping to broaden my horizons with some options for my own work. I found that I was frustrated with the chunky nature of the weave. Joanne presented some excellent reasons why you might want to use this weave structure for very large pieces. It is lighter than a weft-faced work would be (I'm not actually positive this is true since there is so much more yarn going in there even though it isn't packed as tightly) and it is faster to weave (this is absolutely true--it flies off the loom).

I took a class from Helena Hernmarck in 2013 and you can see the images from that class and Helena's show HERE. This class was not like Helena's class and I struggled for the take-away. I'll let you know what I come up with.


Three different warping methods. Three different weaving methods. Mixed results in all cases.
The possibilities in tapestry weaving are many! I think we may only be limited by our imaginations.
No more warping until I finish the big tapestry.
Posted by Rebecca Mezoff