Of course I've heard a lot about four-selvedge tapestry weaving over the years, but it took a demonstration and blog post by Sarah Swett to get me to try it.

Susan Martin Maffei is often cited as the genius behind four-selvedge weaving. She didn't invent it. The Navajo have used this kind of warping for centuries. But Susan is definitely a master. What is marvelous about the way Susan and Sarah warp is that you can get a shed to the very top of the piece. No needle weaving (or swearing) necessary.

Sarah taught me a little different approach with some modifications of her own and Michael Rohde's. She describes it perfectly in THIS stellar blog post.

After a trip to the fly shop and hardware store, I had a jig and some fly line backing.

I headed home, and computer beside me, I used Sarah's post to help me set up for my first little four-selvedge piece (with a few modifications of my own as I was using a Mirrix). 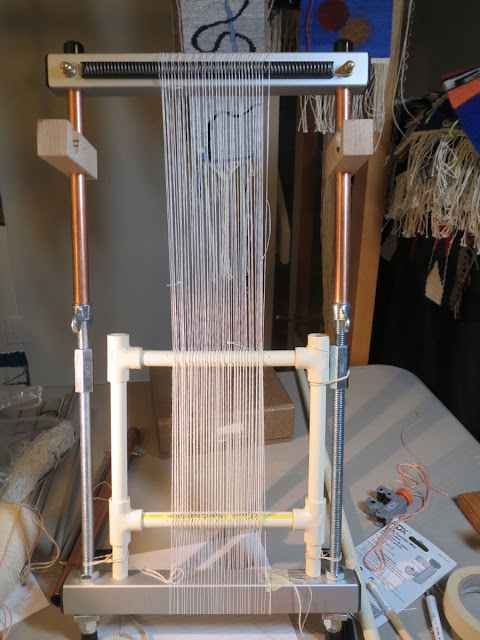 The jig came right out, I tightened the tension, and I was weaving. 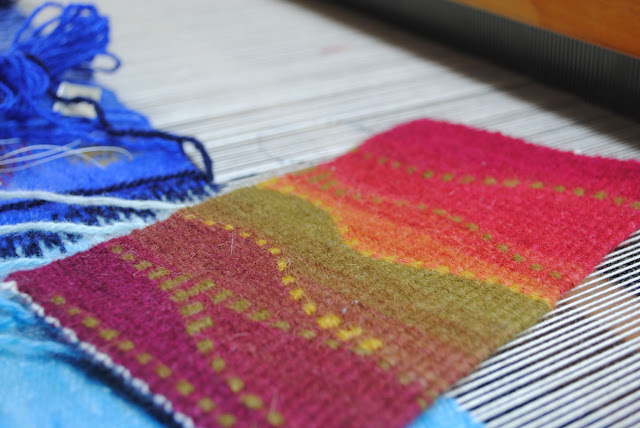 The thing turned out square and the warp loops were almost perfectly even.

Thinking I'd like to use a colored warp that wouldn't show at the edges so much, and not being up to dyeing that particular day, I pulled out some 12/6 cotton seine twine in blue. I wanted to make a much narrower piece that was also shorter. I made some new pieces for the jig and warped up again.

This time I used another piece of rod at the top of the Mirrix to narrow that top beam. I also added very long extensions to the loom. As a final touch, I installed an electric treadle. 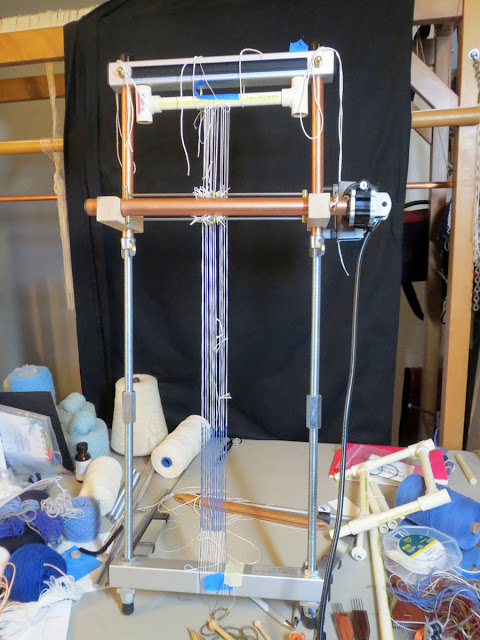 Disaster. I don't even have a picture of it it was so bad.

I don't know if it had to do with the extra length of the loom (probably not), the thinner rod on top (probably not), or the electric treadle's speed and force in shifting the shed (probably), but the warps "walked" immediately making the cotton warp I was intending to weave very uneven after the first change of shed.

I warped up again. The same way. Didn't change anything.
Guess what?

Same thing happened. Isn't the definition of insanity doing the same thing over and over and expecting different results?

This photo is the one I took after I tried to even out the warps again and right before I turned out the light and walked away. 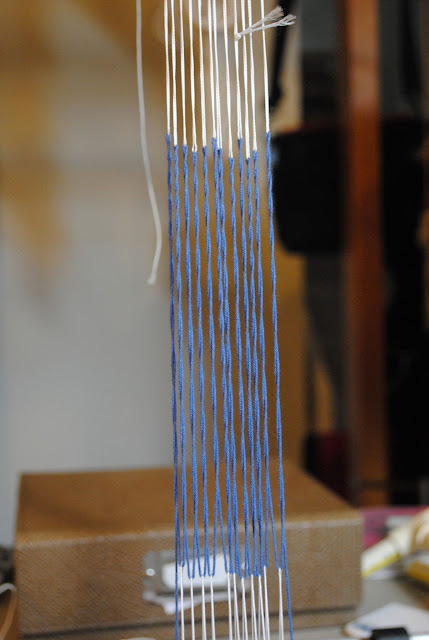 I will try again tomorrow. But this time, I'll modify some variables in hopes of a better result.
It just goes to show you that we might look like a freakin' genius on the first run through, but we shouldn't get too cocky! Expertise comes with practice, not luck.

Have you tried weaving a four-selvedge tapestry? Do you weave Navajo-style or do you use some variation of this idea? Leave a comment below!
Posted by Rebecca Mezoff