I spent today taking plastic off looms and putting together IKEA furniture. I am consistently impressed at how ingeniously that stuff is made considering how relatively inexpensive it is.

I reached a panic point late in the afternoon. I had the large Expedit bookshelf that is for my yarn all put together on the floor. I was pretty proud of myself for getting this one together by myself considering that this is IKEA's recommendation:

But I have some experience with this furniture now and I was pretty sure I could use the wall as another set of hands. Turns out it worked beautifully (and I highly recommend getting a small rubber mallet if you are going to put together one of these babies... it saves your hands and doesn't chip the finish if you're careful). But eventually I was looking at this: 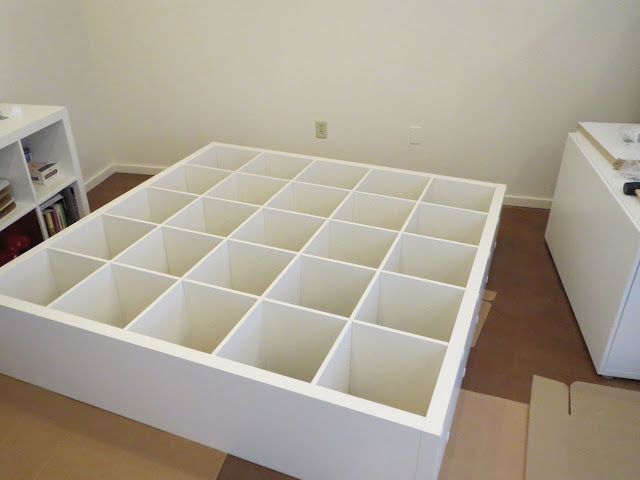 ...and wondering how on earth I was going to stand it up. I tried to lift it enough to get a 2x4 under it in the hopes that when Emily got home from work and I bribed her with some pizza we could lift it. I could only get it up far enough to smash my fingers pretty well. Turns out the thing weighs about 250 pounds when assembled. Remembering my physics, I knew I didn't have to lift that much, but the first few feet up would be a good portion of it. How do you lift heavy things? My dad moves pianos really well with an old car spring and a box of 2x4 pieces... he just jacks it up a little at a time until he can slide a dolly under the thing. But that wasn't going to help me get this bookcase from lying down to standing up.

I got some good advice from my sister via Facebook (basically she said, I can't solve your problem, but don't panic. We Mezoffs aren't good at problem solving when we are panicking). At that point I was exhausted from all the assembly (and a really hard yoga class earlier today) and I just wanted my studio to be useable already!

Then there was a knock on the door (the Festivus miracle part). My water had been out for awhile and my landlady sent our awesome handyman over to find out what the problem was. Turns out my water is still shared with my neighbor and he turned it off to do some plumbing on the other side of the wall. But Juan, being the helpful guy he is, took one look at that shelf and said, "Need help with this?" (Except in Spanish which I even understood!) I applied my puny muscle strength (hoping the yoga will help with this) and he basically picked the thing up by himself.

Here are the leftover pieces from the assembly day. 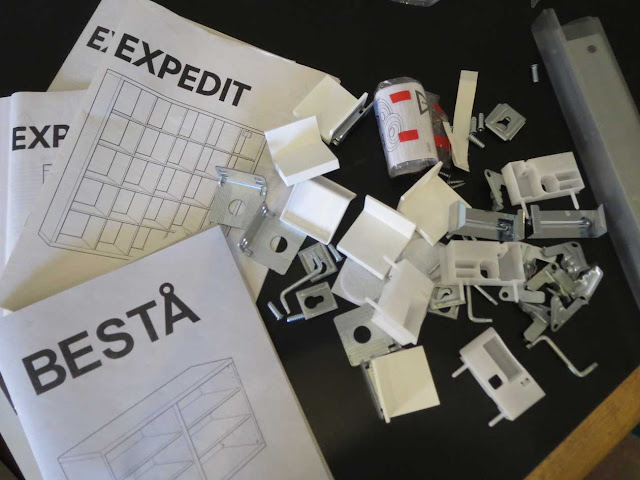 It is a little disconcerting to have leftovers, but I am pretty sure I don't need most of them. I probably should use the one that screws the big shelf to the wall though. All I need is for it to fall over on someone. I'll have to call Juan to get them out!

Here is Cassy doing her best to help all morning. 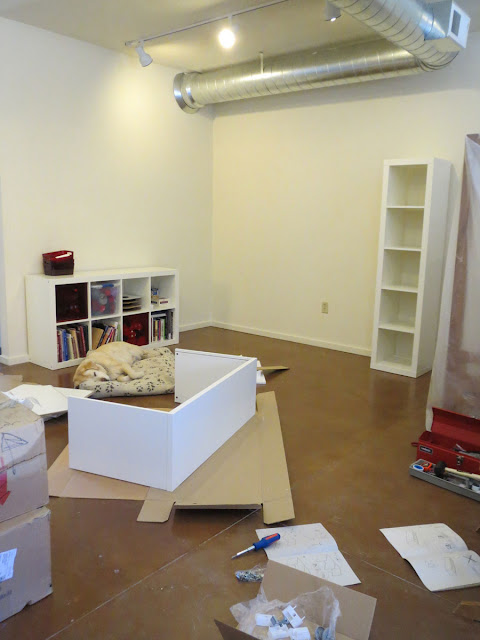